The five dimensions of personality

Last month I was asked to present my ‘top tips’ on supporting change, based on my experience managing a network of healthcare professionals. My first tip was to understand that in a complex system, the real complexity is the people working in that system.

One of the things I realised when doing my MSc in Business Psychology is that psychology can be a reductive science. (Particularly if you go down the route of explaining every action by analysing brain activity.) So it’s no surprise to find that generally all human personality is often reduced to five dimensions – usually called the ‘Big Five’. Some people advocate even fewer, and some split some of the five up into other streams.

But for the purposes of understanding people in a work environment, the ‘Big Five’ are all you need. There is also a handy acronym to remember them by – OCEAN. 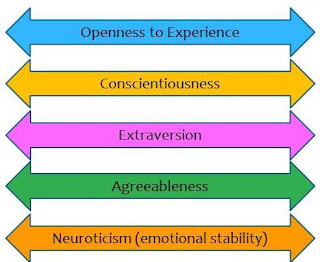 The five letters of OCEAN represent

All five of these personality dimensions are continua. We all display greater or lesser aspects of them. The assumption is that as most people grow up, they stabilise in places on the various continua. If they were cautious children they will be cautious adults and display less openness to new experiences or curiosity about the world. Personally I think it’s a mistake to assume that people will always act a certain way. Some people seem to compartmentalise their lives and exhibit very different approaches in work to outside work. They may be very risk averse in work and compensate for that with risky behaviour in their hobbies and pursuits.

There is no real right or wrong place to be on the continua, but people who operate on the extremes are more difficult to function with in work.

For example, people who are extremely open to new ideas and curious about trying new things can be great at innovation and fixing systemic problems. However, they can get distracted. They often leave projects half-completed. They can go down research rabbit holes. And they are often susceptible to sales pitches and latch on to magic bullets that will solve all their problems.

At the other end of that continua are the joyless jobsworths who were told how to do a job a certain way on day one of their employment and will retire 45 years later doing the same job the same way. It’s really easy to spot those people. Just ask them why they do something the way they do it. If the answer is “We’ve always done it this way”, then they have low levels of openness.

Conscientiousness is often seen as a good trait in a co-worker or employee, because, obviously, nobody wants to be working with reckless people who don’t care about anything.  However, overly conscientious people can become obsessed with procedure, to the point where they are paralysed into inaction for fear of doing something wrong.

Extraversion and introversion aren’t exactly a continua. Introverts can do what extraverts do; it just takes more mental effort. Extraverts don’t get worn out by people as quickly. You can easily spot extraverts and introverts because the extraverts want everyone to go out to the pub after work, while the introverts just want to quietly slope off home. (There's a topical point to be made here about party-keen extraverts being more likely to have an office wine fridge filled by sloping off to the off-licence with a suitcase to buy booze.)

Extraverts are energised by people, so are often regarded as enthusiastic and keen, geeing up the team and pulling everyone forward on a project. Those are all good things. But in my experience, because extraverts are energised by people, they tend to do work in meetings and task groups but not between meetings. They can be very productive in the group environment, often banging out plans and strategies in a short time.

In contrast, introverts find it hard to make decisions in meetings. They often want more time to consider things and weigh up options, backed up by research. Typically, they will go back to their desk and start actioning the list of things that need doing, which they will bring to the next meeting. A good team will have both types of people in and a good manager will recognise that they need to feed the extraverts with group time and protect the happiness of the introverts by giving them space.

Agreeableness is an interesting continuum, and one that I feel has capacity for people to be at different points on the continuum depending on context. Generally, agreeable people are much nicer to work with. They make the team environment more pleasant. However, it’s possible to be too nice and this can impact on productivity directly, with too much social chatter and concern about non-work conversations, and indirectly if people are seeking a consensus before making progress. Sometimes movement happens when a person with a lower level of agreeability decides to take initiative even though a few noses will be put out of joint.

Another way that highly agreeable people can cause problems is through enabling toxic behaviour. I have some experience of people with high levels of agreeability whose main role in a team seems to be smoothing feathers ruffled by more disagreeable members of the team. This prevents confrontation and means that the more disagreeable person is never held to account for their actions that are upsetting people, so they continue to function in the same way. In the long term that poisons relationships.

Finally, neuroticism is about how deeply a person feels emotions, not necessarily how much they express them. Some people display flashes of anger, then very quickly regain an emotional equilibrium and move on. Other people don’t express emotion and internalise a large amount of stress and resentment. There is some debate whether neuroticism should really be in the Big Five, because it seems more liable to fluctuation than the other dimensions.

It’s also the only dimension where lower levels are considered more beneficial in a work environment. Generally, people who are overly emotional and get very stressed over every issue they face are not easy to work with. However, I would be wary of people who never express emotion. They may seem like unflappable bastions of resilience, but it might just be a case that they don’t express emotion because they don’t feel things like empathy and compassion.

There are loads of different activities that can help reveal people’s tendencies on the Big Five continua. If you have ever sat through an ice-breaker that will designate you as an animal, or a cartoon character, or assign you a colour, you have probably been profiled in some way. It’s then up to the managers to observe the outcomes of those activities and tailor their approach to fit. Although, the ability to do that successfully, is, of course, dependent on where the managers themselve are situated on the various continua!