What we did for our 15th Wedding Anniversary

I know no one will really believe me when I say this, but this was Cathy's idea.

We had talked about maybe going away for a couple of nights, or a day trip to Hay-on-Wye, but then the weather was awful, so we went for plan B - Cathy's suggestion.

We went into the Lego Shop in Cardiff and for less than a night away at a fancy hotel, bought ourselves the 1,334-piece expert modeler VolksWagen Camper Van. Then we spent about six hours together building it! We punctuated our quality couple time with a meal out, which was just as well because after the first few hours we definitely needed a break. The build got quicker as time went on as we had fewer pieces to rummage through to find the ones we needed.

It was a great way to celebrate being married and actually spend time together doing something we enjoy. We discovered afresh the importance of clear communication in a marriage ('Ooh, you need to find a really peculiar looking piece, now.'). And we had the wonderful feeling of 'Look what we did!' at the end.

So, here's a photo stream of our anniversary project.

I spotted this shopping in Asda Cardiff Bay, and am quite proud that is has since been added to the Sociological Images pointlessly gendered products pinterest board, after I tweeted the pics. 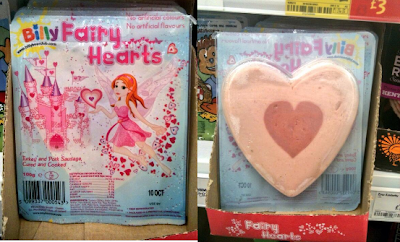 But more to the point, isn't there something deeply disturbing in encouraging little girls to eat fairy hearts? What images does that conjure up? Fairies being farmed intensively in large barns full of glittering cages, fattened up and cruelly murdered so that little human 'princesses' can gorge themselves?

It reminds me of the horrible scene in Stardust where the witches are going to murder Yvaine so they can eat her heart and have their youth restored. Is that what Asda think they are doing by selling these?

In a way, of course, that is what they will achieve. The 'princessing' of little girls is one of the most powerful programmes for infantilising and disempowering women in our culture. Making little girls eat fairy hearts is part of a much wider scheme to dress them all in pink, and limit their dreams to wishing they were pretty enough to win the heart of a prince, instead, of, you know, getting out there and kicking ass.

Even before I was a vegetarian I would never have touched processed meat garbage products like this. But sadly many parents will, and in reinforcing the cultural conditioning of princessiness, this disgusting looking meat isn't the only crap they are forcing down their daughters' throats.

We got free tickets to a screening of this film that I probably wouldn't have bothered to go to otherwise. I do tend to judge films by their posters and trailers and in this case neither have appealed to me.

Which is a shame, because I found this funny and highly enjoyable, even if it is only scoring less than 6 on IMDb. It's feel-good movie with some stand-out performances from Kristen Wiig in the lead, Annette Bening, and particularly Matt Dillon, playing a guy who might be a total flake, or might not. My favourite character was Ralph, played by Christopher Fitzgerald. Glee fans will also enjoy Darren Criss's performance.

The plot is fairly simple. Wiig plays Imogene, a playwright who never lived up to her potential, whose life comes unstuck. She winds up in a psych ward and gets put in the care of her mother who she has been estranged from for years. To make matters worse, this means she has to leave her 'successful', cool Manhattanite life to slum it back in her hometown on the New Jersey shore. But that forces her to confront her own failings and discover her family aren't all they seem after all.

So far, quite predictable. But there's more to it than you'd believe from my rubbish precis in the previous paragraph. It's a coming of age tale for a girl in her 30s taking stock of her life, and maybe that's what chimed with me, being a guy in my 30s reflecting at present on what I want to be doing with my life.

The jokes are reasonably sophisticated and aren't belaboured. In fact it's the throwaway prop gags and references that made me realise this was a better film than many. Stuck back in New Jersey with just the clothes she left behind when she left in the 90s, Imogene ends up wearing a Friends t-shirt. I thought that was funny and, in a way, authentic. That's just one example.

There are also some touching moments. Ralph makes a sheet-fort as a makeshift bedroom for Imogene, as her room is unavailable to her. There's also a moment later on that made the audience go 'Aw!', again involving Ralph. But it doesn't lapse into ridiculous schmaltz, although the ending felt a bit sudden and too perfect. Still, that's a minor gripe.

It's a feel-good movie and it made me feel good. So, job done.