(That song should so be on one of these games...)

Lego Rock Band for the Wii is my new addiction. It's basically Guitar Hero in another guise, but better than the most recent Guitar Hero editions as you can have more than one 'band' on there, meaning you can play your own game.
One thing I like is that every so often you get to record 'albums' and name them yourself. I have resurrected my old band name, Cadmium, and have recorded two albums so far: A Kind of Heavy Metal and Elementalists. (There's a theme there if you can spot it.)
I will shortly be recording my third album and need a name for it. I'm tempted to call it The 'difficult' third, as a reference to the common problem bands face with their third album. By then they have usually run out of material they worked on in their gestation period and have to write something new.
Their are some third albums that buck that trend - the Killers and the All American Rejects managed it. And Bon Jovi made their name off the back of their third album (Slippery When Wet).
But it is weird how the third album is problematic. Dan Piraro makes an interesting comment in his book that I'm currently reading, when he says that people's perceptions of cartoonists is usually that they are in decline from past glories rather than improving with practice. I guess the same is true of many bands.
But really the reverse should be true. Great bands should get better with time and experience. So, why don't they? It's an interesting question.
Posted by Jongudmund at 07:43 No comments:

Old poem alert: don't read if you don't like angst

Found this lurking in a little-used file on the system... It's a poem I wrote 6 years ago that is mighty pretentious, but has a nice rhythm to it I especially like the second line of the second stanza.

I sought God on a grey day
With a short horizon and cloud hung low
Mist obscured where I should go
And when I talked, I talked in tongues
But now I’m mute
And the point is moot
The tree of life yields bitter fruit

I sought God on a dark night
In the vaults of Heaven, in a crypt of stars
And moonshine shone on prison bars
And when I sang, I sang sad songs
But now I’m mute
And the point is moot
The tree of life yields bitter fruit

I sought God on a cold morn
In a ghost-white forest, under haunted trees
A chill wind stirred a grave of leaves
And when I wept, I wept alone
But now I’m mute
And the point is moot
The tree of life yields bitter fruit

I sought God on a drawn eve
When my breath was warm and my skin was cold
The world was young, yet I felt old
And when I slept, I slept like stone
Forever mute
But the point is moot
The tree of life yields bitter fruit
Posted by Jongudmund at 09:09 No comments:

Anyone see the problem with this spacing? 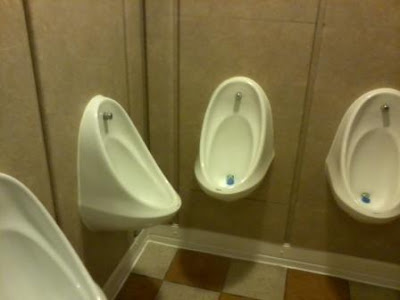 So, the news today was that it looks like the "fair" spending cuts are going to hit the poorest hardest.

Weeeeeeelllllll, who could have seen that coming? What, nice Mr Cameron and his true blue tory chums are going to further marginalise the marginalised. Shock! Horror! Surely not...!

Well, yeah. Because tories play to type. Conservatism in its very nature is about preserving the status quo. And the status quo is that there are rich people and there are poor people. And the rich people want to stay rich and the poor, well who cares, they're not important, or 'respectable', or stimulating the economy.

Since taking power the tories have announced they are going to 'liberate' the NHS, with a document that within the NHS is regarded as privatisation in all but name. The tories have used a notable tax-dodger to review public expenditure and identify wastage. Oh, and they upset middle class people by threatening to cut child benefit - which nice Mr Cameron resolutely and passionately declared they Would Not Do.

Last week I heard an interesting presentation by the boss of Mori, the opinion pollsters. He said that broadly speaking a majority of people liked the idea of a 'big society'. The problem was only a handful of people wanted to be the people serving others in the 'big society'.

Which reminds me that last year when I worked in the charity sector, some people I worked with got excited about David Cameron's idea that charities could partner with government to deliver services. 'How great!' they cried. 'A government who will work with us.'

They were idiots. This 'partnership' is a scheme to get charities to shoulder the costs of caring for the poorer ends of society when government withdraws. It's not partnership - it's the government saying "We don't want to do this any more... over to you! Yay now we can afford a tax cut at election time to our chums in the City!"

The thing is charities are unreliable. They don't have secure income streams. There is huge variation in what they can do on the ground in different areas. They rely on goodwill to get through most of the time. And they are feeling the pinch as a result of the recession.

Yeah, let's use them. What a brilliant idea.

Now you could say, "Well, Jon, it's obvious where your political sympathies lie and you just have an antipathy towards tories. This is your excuse for laying into nice Mr Cameron and his liberal desperate sidekick, who are both saying the figures have been skewed and the poor won't really get screwed. Where's the fair and even-handed reportage that we ought to have on this blog?"

You know what, no. No balance. I don't need to say anything when international slime-hound Rupert Murdoch is sticking up for Cameron. That's all the balance we need.
Posted by Jongudmund at 08:21 No comments:

There are two things about 3D movies that annoy me. One is when the 3D is completely irrelevant and doesn't really add much to the film. The second is when cinemas charge you extra for watching a film in 3D but don't give you a 2D option. That's just a price hike for no reason.
Also, at Cineworld in Cardiff they add the 3D charge on to the ticket price so that it isn't included in the Orange Wednesdays deal. Having worked in the cinema industry I know why they do that. It's very simple. If a cinema can gouge its customers, it will. Bastards.
Anyway, to the film. It's an animation. It stars the voice talent of Steve Carell, who I find is either hilarious or dreadful. And it's pretty funny.
The basic plot is that an evil super-villain, Gru, ends up responsible for three orphan girls, who aren't afraid of him at all. The outcome is fairly predictable for this kind of movie, but there are some unexpected detours along the way.
Interestingly, the central message is that Gru became a super-villain because his childhood was spent seeking affirmation from his mother, who never praised him. His eventual emergence as a parent of sorts (the kind every kid would in fact want - who wouldn't want a Dad packing a disintegration ray at a funfair, or genetically modifying the dog?) allows for an interesting redemptive finale.

There are also several stolen scenes featuring Gru's 'minions' - bizarre little creatures bred to serve him. They provide plenty of comedy throughout the film, and are destined to be made into all sorts of merchandise I'm sure.
I doubt this is the last we will see of Gru, his girls, or the minions. A franchise no doubt awaits. Hopefully though, the quality of the animation and the humour will stay at this high level.
Jongudmund's rating: 9/10
Posted by Jongudmund at 07:43 No comments:

The juxtaposition of these two books in a local shop made me laugh. Not sure which is more primitive...

Posted by Jongudmund at 07:38 No comments:

My buddy Connor saw this headline on a recent trip to Aberystwyth. Who says nothing ever happens in Aber? 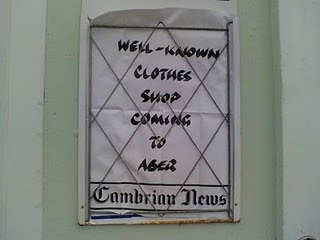 It worked though. He bought a paper. Read the full account of his exciting day here (including WHICH clothes shop it was!)
Posted by Jongudmund at 21:13 1 comment:

I have to be careful what I write here because a) my boss occasionally reads my blog, and b) we got a directive last week telling us that staff had to be very careful what they wrote on social media sites in terms of the reputation of our employers.

But anyway, I went to the Association of Healthcare Communications and Marketing annual conference in Sutton Coldfield this week. This is the kind of semi-expensive conference sometimes referred to as a 'jolly'. I'm not sure who goes on jollies, but I worked like a dog during this conference, starting with a 7am departure on the Tuesday.

I pretty much wrote notes all day, during my breaks I toured the exhibition researching ideas from other organisations and various compaines who could help us do a better job, then networked all night to both raise the profile of my organisation on a UK level and to represent Wales generally. Two 15-18 hour days that left me knackered.

So, not a jolly. But a brilliant opportunity to learn and be inspired.

The real highlight though was the Communicating Healthcare Awards on the Wednesday night. We were up for two awards and my boss Andrew had been nominated in his own right for a third. Our two awards were announced at the beginning of the night and we didn't win. Sigh.

Fortunately we had been put on a table with the Scottish contingent and we had some vicarious wins 'for the table' when one of the Scottish organisations picked up an award and a runner up. Celtic solidarity and all that.

Then the award for Communicator of the Year came up. "And the winner is... Andrew!" I let out a huge yell of triumph - so much so that our head of department Jonathon said you'd have thought I'd have won - and a slightly stunned Andrew headed to the stage to pick up his award from the NHS Director of Communications, Colin Douglas.

I still feel incredibly chuffed that Andrew won. He totally deserved it because he has worked damn hard to make a difficult comms message work, and there's a personal triumph to it as well. He said to me it was almost three years to the day since he had been let go from the place we previosuly worked together. (Now he has been recognised as one of the industry's best. That was always an 'interesting' decision by our previous employers!)

I helped to write his nomination (so, really the award is mine, ha ha) and can vouch that every word is true. No hyperbole. I did tell one of my new Scottish friends about my involvement in the writing and she turned to her Director of Communications and said "Ally, we've got to hire this guy!" But we had all had a little bit of vino by that point, so I don't think that was in any way serious. I'm not moving to Glasgow, don't worry.

Then there was dancing to some old school classics until midnight. Oh yeah.
Posted by Jongudmund at 10:23 1 comment: