I usually listen to the radio when I'm doing stuff in the kitchen. With the world generally being pretty dreadful I've been avoiding news-based stations and so have retuned the radio to Absolute Radio 90s, which just plays songs from the 1990s, triggering memories from two thirds of my life ago.


For example, when The Size of a Cow by The Wonderstuff comes on, then I'm transported back to sitting at the heavy lab desk at the back of Mr Dorricott's science classroom. My desk-mate, Tim, was really into The Wonderstuff and a lot of other music. He used to go on the train to Birmingham to buy "choons". He pirated me a cassette of Nevermind. I remember once at my house my tape player chewed up his tape of Achtung! Baby and when we cut and pasted the tape back together we put one bit back in the wrong way round. Unintentional remixes of our time.

(This will all mean nothing to anyone under the age of 30, probably. Tapes? What are those?)

Another song that is on heavy rotation on AR90s is Parklife by Blur. I have a very specific memory related to this. Back when that song came out I used to go to a church that met in an upper complex of rooms above a pub. During Sunday evening meetings you could hear the music playing in the pub downstairs. Sunday evening meetings were generally informal, and I remember one evening we had moved the chairs round into small circles to pray in groups. Through the floor came the thudding beats of Parklife. I wasn't the only one in the prayer circle mentally singing along.

I know I wasn't the only one singing along because a few of us mouthed the word 'Parklife' in time with the song. We saw each other do it and grinned.

And then I left Shrewsbury to go to university, just as the Britpop bubble exploded. Anything by Oasis or Shed 7 or Elastica reminds me of university days. Basket Case makes me think of my digs in the first year when one of the first things I bought was a CD player that I cobbled into my hi-fi amp and double tapedeck. But those are later days and moving to Cardiff for Uni, to living here afterwards is more of a continuum. When I left Shrewsbury to go to university I ended up never going back there to live, not even for a summer holiday. So that is the one clear page break in my story.

It's the songs from the early 90s that are the real nostalgia triggers, but that's not to say I particularly want to wallow in that nostalgia. Looking back it's a wonder I got through those teenage years as I was barely coping with undiagnosed depression, was a fervent religious fundamentalist, and had the weight of expectations on me to go to university and achieve great things.

That last one is hard to reconcile with the great love I had (and still have) for my father, but he did tell me how he thought I could follow in his footsteps and study medicine, and one reason I went to study theology is because I knew Dad would approve of that choice when medicine was closed off to me (more on that later).

Understanding depression more as an adult, I can see how it affected me quite a bit as a teenager. I know I'm not unique in finding teenage life hard. Recently I have reconnected with a few people I knew in school and realised that I wasn't the only one who was presenting a brave face. Some of the people I most admired have told me they felt constantly on edge, or were hiding an eating disorder, or were bullied as badly as I sometimes was, if not worse.

I think it would have been good for my fragile, nervous self when I was younger, if I had known that the people who seemed to have got their stuff together were actually feeling just as desperate on the inside.

For me, my depression has left me with some regrets. I dropped friendships that I wish I hadn't. It affected my concentration and my ability to focus on schoolwork, and dampened down my love of learning. I barely read some of my textbooks at A-Level. It's stuff I sometimes wish I had actually learned. It also stopped me from learning new skills. I was very keen to learn how to play guitar, went through a depressive phase, sold the guitar to a classmate, and I still occasionally wish that I had been in a mental place where I could have actually learned to play it.

I had almost zero self-confidence, which was also linked to the depression. Here's a story that illustrates it. I was planning on studying science at A-Level, with the end aim of applying for medical school. I went on an open day to the VI Form College and went to the science labs. My school had switched that year from single subject science GCSEs to a "Double Science" course that covered all three subjects and gave you two GCSE grades at the end.

When the science teacher heard this, he was very dismissive. "Oh," he said, "you won't be able to do A-Levels unless you've done single subjects at GCSE. Most people find the step up really hard anyway, so it will be almost impossible for you!"

I remember feeling absolutely shocked by that. There was no point trying if it was going to be impossible. So I went and did three other subjects instead.

For a long time I was angry that my school had made me do double science, because that had prevented me from going on and potentially becoming a doctor like my dad. But it wasn't the school, and it wasn't even that discouraging response from the A-Level teacher who was to blame.

It was only recently I thought to myself, 'Why did I let someone I had never met before shape my choices in such a way?' Without sounding disrespectful, he was just a bog-standard teacher in a run of the mill VI Form College in a half-horse town. In what way was he an authority? He had never met me and he had no clue whether I was any good at science or not.

That encounter could have gone another way. I could have ignored him and had a go. I got Double As in my Double Science (despite mainly talking to Tim about music) so clearly I had some ability.

Besides, every A-Level teacher reckons their subject is really hard and requires a lot of work. If I turned up in that class and I was behind the curve, then a good teacher would find a way to bring me up to speed, rather than writing off my chances before I'd started the course.

But when you're depressed and you feel that everything is a struggle, you don't respond to negativity like that in a positive way. It doesn't spur you on to try hard and prove them wrong, which is how I wish I had responded.

You have to be careful with wishes like that though. If I hadn't been so discouraged by that guy, I wouldn't have ended up studying theology. Even, if I hadn't been depressed and had studied and got the A-level grades I wanted to get, I wouldn't have ended up studying theology in Cardiff. My life would have had a very different trajectory and although I was in a pretty tough place then, I'm in a good place now. Happier than a lot of people, and, I hope, doing a bit of good in the world.

It all worked out. It could have been an easier route, though.

I'm going to stick with listening to Absolute Radio 90s because in a strange way hearing those songs has helped me rearrange some mental furniture and appreciate my journey from then to now.
Posted by Jongudmund at 20:28 No comments:

This was a fun little community thing that happened right at the end of May. A community project called the Grangetown Art Trail began posting pictures of people preparing their windows for the Grangetown Zoo for people to visit over the weekend. This is a bit like the rainbows project that I've blogged about previously.

We decided to join in. I say "we", but Cathy is the creative one. She made these wonderful bears to sit in our window. Everyone, meet Arthur and Ursula. 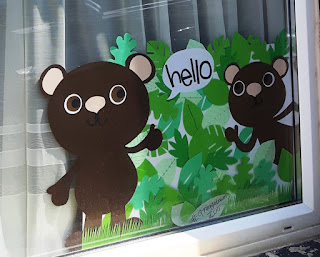 Cathy also made them a little, Welsh-speaking, friend. 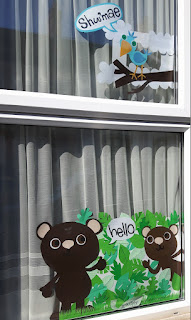 We went out for a couple of walks over the weekend and found some more "exhibits". Sorry for the quality of the photography, but you know how it is trying to photograph animals...

We saw lemurs in Earl Street (behind a very clean, very reflective window!) 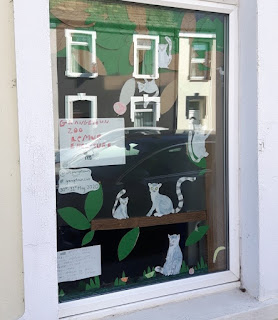 They were all named after Harry Potter characters.

We saw tigers in Holmesdale Street 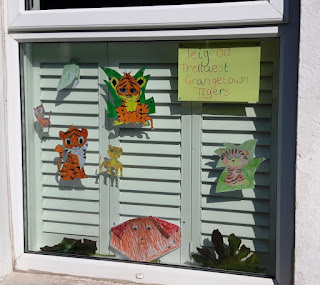 And nearby there was a flamingo 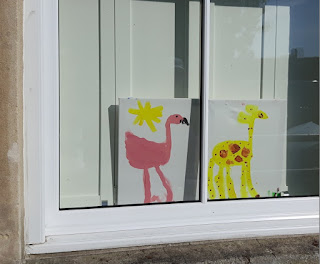 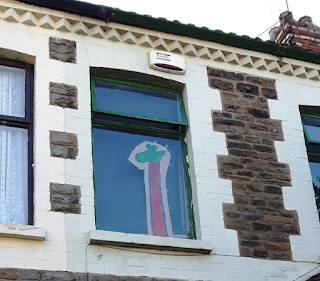 And a monkey who had fallen out of a tree. We helped him back into a hedge. 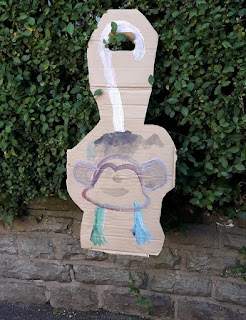 There was a variety of fauna on display in Virgil Street 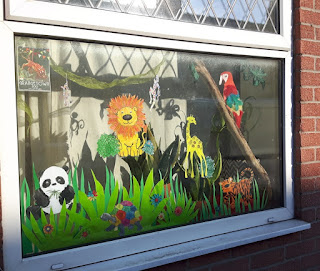 The parrot was bright and colourful, with beady eyes 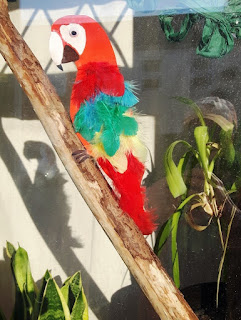 They had a majestic, yet approachable looking lion as well 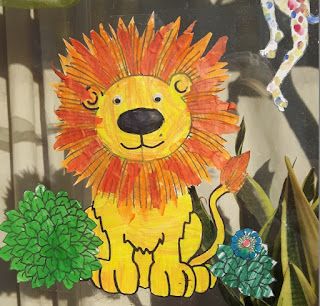 And then in Warwick Street we found the aquatic exhibit 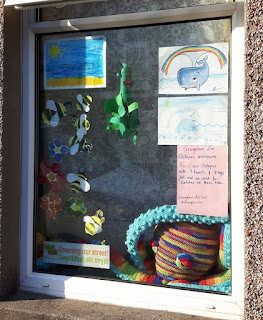 The main resident of which was this handsome knitted octopus 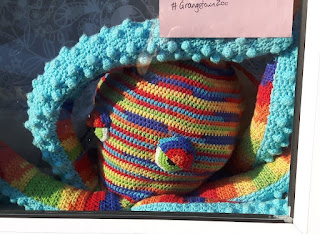 It was a really lovely art project; a celebration of creativity. It was great fun wandering the streets looking for the different creatures as people shared their locations on Twitter. I would really like this to become a thing that happens annually with more people joining in and not be 'one of those things we did during the crazy lockdown'.
Posted by Jongudmund at 20:30 No comments: