Helping out a friend of mine who couldn't get into her loft to deal with roaming rodents, or set the 'little nipper' mousetraps she'd bought, I realised I had to set my animal lover principles on one side for the greater good.

However, I did have to laugh when she explained how she'd broken her self-imposed nearly-two-decade boycott of Evil Nestle to buy the bait. Apparently mice go mad for a Toffee Crisp.

A few minutes after arriving home I got a text to say she'd heard the traps go off. Looks like the little meeses do like the taste of evil after all...
Posted by Jongudmund at 22:55 No comments:

The buzz is Mattel/Hasbro are planning to sue Facebook for allowing Scrabulous to rip off Scrabble. As one of the half a million people who play Scrabulous pretty much daily, that is a) irritating beyond belief, and b) doubly annoying because it shows how stupidity is ingrained in corporate reactions to anything these days.

All across the world Facebookers, bloggers, Scrabulous fans and any intelligent person is saying 'What the hell are Hasbro/Mattel doing?' For a few quid they could pay off the guys who developed it and have access to half a million people. They'll have a Facebook presence any other global brand could only dream of and the income from the ads would easily pay them back what the Scrabulous set-up would cost (it's much easier to negotiate a good deal with someone you could otherwise nail for copyright infringement). Basically someone else has done all their R&D and built up a client base for them. Only an idiot would threaten that.

Plus, if they bought out Scrabulous, they'd look like a right on corporation who understand the ever-changing technological world we live in. And , more importantly, I could carry on beating Clare on a regular basis.

Instead with their copyright lawyers and legal threats they look like a bunch of grunting luddites with the commercial nous of a small walnut. It's a wonder they have any internet presence at all as they obviously hammer their thick-ridged skulls against the keyboards in the vain hope of communicating with other simian evolutionary throwbacks.

They are the boneheads who see a goose laying golden eggs and decide the best thing to do is kill it, piss off all the people who loved the goose and then try and sell them stuff. Morons!
Posted by Jongudmund at 22:51 2 comments:

I've been watching a few movies of late and need to catch up on my reviews.

Bee Movie
Bizarre animation written by and starring Jerry Seinfeld, which tries to be really funny, but falls a bit flat. 5/10

Enchanted
After years of being sent up by other companies, Disney finally indulges in a bit of self-parody and does it very well indeed! 7.5/10

Cathy bought me a My Name is Earl quote-a-day calandar. This one from a couple of days ago made me laugh:

A simple misunderstanding gets a lot less simple when you add choppers and a SWAT team.

Posted by Jongudmund at 07:40 No comments:

Email ThisBlogThis!Share to TwitterShare to FacebookShare to Pinterest
Labels: Cathy, My Name is Earl, quotes, TV

(It's because I'm kicking butt at Scrabulous)
Posted by Jongudmund at 22:38 No comments: 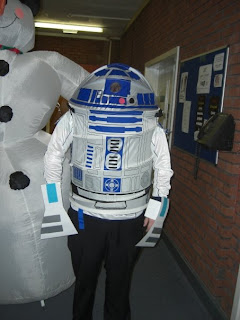 Me as the true hero of the Star Wars films (at the Elevation Christmas party)
Posted by Jongudmund at 19:44 No comments:

I missed out Wally Joyner from my list of Padres players with funny names. Also, looking through some of my other cards I found a rookie card for a Mets player called Ian Bladergroen. Which just sounds painful.

But the best name in baseball has to be Albert Pujols. It doesn't look so funny written down, but he's Hispanic. You pronounce his name by sounding the u as 'oo' and the j as a h.

Now say it.
Posted by Jongudmund at 23:31 No comments:

First time for everything

My bud Lorenzo has been overly busy planning his nuptials, hence a disconcerting lack of blogging recently from him. Said wedding was today and it was brilliant.

Not only was it the first time I've been to a wedding where the groom played in his bride-to-be on the piano, but I doubt I'll ever go to another wedding where the band will play a Metallica song while the happy couple are signing the register. Well if you're going to rock, you've gotta rock properly!
Posted by Jongudmund at 23:26 1 comment:

An evening out at the Russes last night and we watched Hairspray, which for some reason they were convinced I'd hate as it's a musical. I really enjoyed it. John Travolta in drag and Christopher Walken strutting some funky moves, some damn fine singing and enough hilarious lyrics to make you laugh out loud. What's not to like? And it had MMMmmmmmichelle Pfeiffer 'rrrrrrrrrrrrrrrrr' in it too (is it wrong that I still think she's hot?)

Elaine had also purloined a bottle of holy water for me from her grandparent's car. It's from Lourdes and the bottle is shaped like the blessed virgin. You take off her crown to get the water out, although as it has bits floating in it, it's probably not safe to drink.

I find religious tat like that quite amusing really, so I've put plastic bottle Mary with my "myyrh" incense sticks, Last Supper chewing gum ("The King of the Chews"), and the Jesus-playing-extreme-sports-etc calendar. I might clear a shelf for it all at some point and add in my action figures of Jesus and Moses.

I can see the conversation with my more evangelical friends now...

Posted by Jongudmund at 11:14 No comments:

Three day weeks are the future

Yay, it's Friday already. Which feels weird, yet welcome.

I've been thinking the last couple of days of starting a blog chronicling 'Paranoid Evangelicals', based mainly on what I see in the religious press and also the forwarded emails which come round the office regularly. Here's a few bits and bobs which could go on:

So, that's four without really looking any further than my email inbox. Sadly I'm a bit too busy to set up another blog (I currently have 3 on the go - 4 if you count freelance theology, plus 1 I never update any more). If only I had the kind of time on my hands as the people who compose concerned emails and send them to everyone in their address book .... ;)
Posted by Jongudmund at 23:05 No comments:

My brother leant me this and it seems I'm addicted. "Just one more game, and then I have to go to bed/work/the toilet..." I. Just. Can't. Seem. To. Switch. It. Off. Seriously it's ruining my life.

For the record I can kick ass at 'Novice' level, but the step up to 'Professional' is tough and fiendishly frustrating. I want to beat the machine! Curse you, Nintendo, you've gone and done it again!
Posted by Jongudmund at 08:27 No comments:

While I was out of the office the top drawer of my desk had mysteriously filled to the brim with 'styrofoam peanuts' (aka polystyrene packing pieces). But that did mean everytime I reached in for my hole punch (or other desk item) I had all the excitement of a lucky dip.

Eventually I got bored and took them out. I was then left with the dilemma of what to do with them. Should I just bin them? Or should I pass on the excitement?

They ended up in Mark Etting's desk drawer.
Posted by Jongudmund at 19:21 No comments:

I've been buying baseball cards featuring Padres players recently and some of them have quite humorous names. Here's the pick of the bunch:

Chase Headley sounds mildly amusing too.
Posted by Jongudmund at 12:15 No comments: