A plus for the A Team (movie review)

The thing about those shows you adored as a kid is that when you watch them as a grown up they are often howlingly bad. Knight Rider, Thundercats, Airwolf... even The A-Team isn’t quite as good as I remember it as a kid.

And the thing about remakes and ‘re-imaginings’ is that they can vary so much from the really quite good (Star Trek last year or the first Transformers movie) to the horrifyingly shameful (Starsky and Hutch with Ben Stiller and Owen Wilson) to the plain bizarre (Tim Burton’s Planet of the Apes).

I guess when you take a much-loved children’s TV show and update it into a big-budget film there is the potential for so much to go wrong. Generally though, The A-Team got the mix right. There was humour, plenty of ridiculously over the top action, sequences where the team improvised some gear from whatever was lying around, and we finally found out why BA is afraid of flying.

There are some gripes. Part of the original Face Man’s charm was that his sexual conquests were only ever hinted at in the scripts. In the movie they are referred to more explicitly (nothing too explicit, thankfully). There are a couple of scenes where the main action retreats off-stage. You don’t see how Hannibal manages to handcuff two snarling Rottweilers together, for example.

Also you have to stay right until the very end to see the cameos from Dirk Benedict and Dwight Schultz, when those would have worked in the main cut of the movie. And if you’ve seen the trailers you’ll know the van gets mashed. Well, that happens quite early in the film, which is an odd thing to do to a merchandising icon. Also, sometimes the CGI looks a bit ropey.

But overall, this is a remake with a decent budget and a bit of class. Some stand-out moments include a heist in Baghdad, a 3-D movie that comes to life, and the first time Murdoch meets BA and Face. There are occasional drifts into more thoughtful areas. BA struggles with whether he can renounce violence. Face asks Hannibal if he could ever betray his men. But the deep stuff doesn’t go too deep and descend into pathos.

I had a feeling I would enjoy this film before I went, but was apprehensive too. Bad remakes are painful to watch. This, thankfully, was a pain-free trip to the cinema. I’d recommend it.

It's not that there's not a lot happening

It's rather that there is too much going on. And trying to best Bowser in Super Mario Galaxy 2 has taken up a good proportion of my free time. That and the complete box set of the West Wing that I bought with my redundancy gift (and an extra tenner).

But I have bested Bowser and I'm aware I haven't blogged much recently so here's a little thought-form from a Tragically Hip song I listened to while walking to work recently, that has stuck with me.

"We live to survive our paradoxes."

I have a few paradoxes in my life at the moment. Doubt and survivor guilt and subliminal choices and plans and hopes and other abstractions, distractions and cognitive dissonances. We are complicated creatures. But by and large we live to survive our paradoxes.
Posted by Jongudmund at 07:40 No comments:

My favourite moments of the World Cup

The World Cup 2010 is over and gone, with a final that will be remembered more for its brutality than anything else. Referee Howard Webb described it as two hours of hell after he had to dish out 14 yellow cards. He could have given more, and really its amazing only one person got sent off.
But as the dust settles on Spain's triumph, what will I remember from this world cup? Well, here are a few...
1) Calamitous England
Rob Green's despairing flap after he spilled the ball to let the USA equalise in England's first game, followed by his faceplant into the grass in shame, was only equalled by John Terry's fish impression as he dived and contorted his body against Slovenia. See if you can find a slow-mo replay on YouTube somewhere and prepare to laugh. 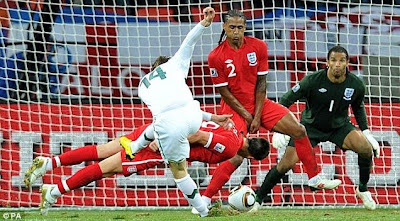 He didn't even get the ball.
2) Great finishing from Germany.
Miroslav Klose's side-foot for their fourth goal against Argentina was truly world-class. And they demolished England with a powerful running game. Spain had to sacrifice their creativity to smother the Germans in the semi-final to scrape a win.
3) Ghana's last minute penalty miss
Drama by the bucketload after Suarez's handball, which will no doubt be played repeatedly on World Cup clipshows in future.
4) Giovanni Von Bronckhorst's long-distance goal against Uruguay
I simple couldn't believe that went in. An amazing goal.
5) Paul the psychic octopus
When national news networks interrupt their programming to bring you the predictions of a cephalopod, you know the human race is starting to lose it slowly. Apparently he now has his own trophy...
Posted by Jongudmund at 07:25 No comments:

It's been a great World Cup so far

I've said this a few times to people, but I feel I have really conected with the World Cup this time around. I can't remember much of the 2006 World Cup. I can recall England scraping a win against Trinidad & Tobago, and Ronaldo getting Rooney sent off, and Zidane's inexplicable headbutting of Marco Materazzi in the final and that's about it.

But this time round there seem to have been some really memorable things.

First off, England were an utter crapfest. I know I'm only saying this now, but my wife and my Dad are both witnesses that I predicted England wouldn't get out of their (ridiculously easy) group. Okay, I was wrong on that, but they barely scraped it, and then they met Germany.

That's another thing, I haven't seen a German international team play the way this team play - with pace and verve. Normally German sides play percentages, build from the back, dominate the midfield and score from set pieces.

This side has the usual Germanic swagger, but when they play on the break and pass the ball into the feet of the runners it's joyful, irresistible football. Oezil's dinked chip-pass to Klose for the fourth goal against Argentina was magical, as was Klose letting the ball drop to within a whisker of the grass before side-footing the volley home. Watch it and watch it again to see an absolute masterclass in finishing.

I never thought I'd get excited by Germany, but I'm excited.

There have been spectacular exits too. France self-destructed in the group stages. Italy were put out by relative minnows in their group too. England, well, stuttered into a mismatched game with Germany that ended in hefty defeat - a game that will live on in infamy for a goal that should have been but wasn't given. Holland unexpectedly put out Brazil.

And then there was Ghana's misfortune. To miss a penalty in injury time, for the most blatant handball blocked shot on the line I have ever seen, is one thing. But then to lose the penalty shoot-out five minutes later was a travesty of justice. I watched the game and could barely watch Gyan take the penalty. Somehow I just knew he would miss. And when it went to penalties I knew Uruguay would win. Why? Because football is a bastard mistress who torments her lovers with harsh injustices.

Which of course is why we love it so.

And tonight's game had drama too. Holland got a goal, loosened up, let Diego Forlan score, and got edgy, then got a fortuitous goal and scored a third through one of the best headed goals ever and were enjoying themselves again. Until injury time, when Uruguay worked a training ground set play and bizarrely scored, to set up a tense final three minutes when it looked like the most unlikely comeback ever might just happen.

Fortunately for the Dutch (and my Holland-supporting spouse) Uruguay's persistence didn't pay off. Holland are through to their first World Cup final since 1978 and have as much chance as anyone of lifting the trophy.

And tomorrow they will find out who they play in the final: Germany or Spain. I think it will be the Germans, but Spain may do better against European opposition than they did against Paraguay in the last round where they edged out a very close game 1-0.

I actually feel excited.
Posted by Jongudmund at 22:29 No comments: