I like seeing books positioned on shelves next to each other that invite commentary. In the run up to Christmas my local Asda has suddenly got a load of books on the shelves. Someone put these two titles side by side. I wonder if they chuckled as they did it. 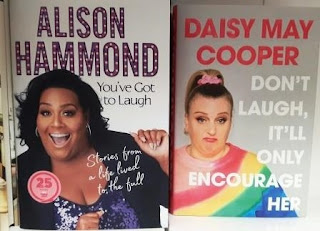 I think it's the expression on Daisy May Cooper's face that makes this. Like she is really fed up with Alison!

Posted by Jongudmund at 07:57 No comments:

Snack of the Month - Pepero cream and cookies sticks

November has flown past and I almost missed blogging a Snack of the Month! This month the snack is another Home Bargains discovery that claims to be Korea's number one brand! 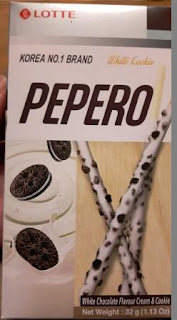 I can't tell if the number one claim is for the Pepero sticks or for the manufacturer, Lotte.
I thought I would give this a go as I like the 'Cookies & Creme' bars made by Hershey. (Cookies & Creme is about the only palatable "chocolate" made by Hershey, probably because they aren't actually chocolate!) Like other biscuit sticks from Asia, these come in a box with a foil bag inside. The sticks were thicker than I expected and the actual biscuit was quite plain, diluting the sweetness of the white chocolate. They definitely felt more like biscuits than sweets. I forgot to count how many sticks were in the packet. There were about a dozen or so. Certainly a substantial snack for such a small box.
The back of the box is an abosulte blizzard of nutritional information, all saying the same thing but sliced different ways for the different markets this product is sold in. 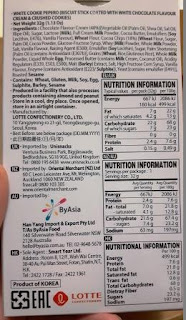 I have a Christmas-themed snack lined up for December, which I am reasonably excited about. But I will have to wait a few days before snacking commences!
Posted by Jongudmund at 17:12 No comments:

We are now ten months down, past Hallowe'en, the clocks have gone back, and it feels like the end of the year is nigh. October was another busy month. I had some big meetings in work discussing possible changes, which prompted some very passionate discussions. Thankfully I had plenty of football to take my mind off things, including my first ever visit to Frome with its delightfully named stadium.

Other football-watching trips included Flint in North Wales and Merthyr Tydfil. In Flint I think I saw my long-passed paternal grandfather in a photo on the clubhouse wall. I attended seven games in the month - a new record for October.

There were also some other milestones, including my 50th Barry game (a 3-0 defeat at home to Newtown), my 10th Grange Albion game (a 4-0 defeat at home to Aberdare Town) and my first ever Futbology badge for the first game at a new ground, which was also my 75th football ground that I've visited. (And blogged in detail here.) 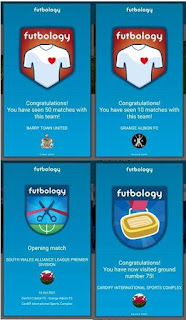 In terms of another milestone, I posted my 394th blog post on my blog called Point 394. That felt very meta. I have been working my way through a large consignment of baseball cards and managed to post every day in October.

Life is starting to get back to normal... ish. I went on my first trip to the tip in a year and a half. This sign amused me so much I took a photo. "Swmpas" is my new favourite Welsh word. 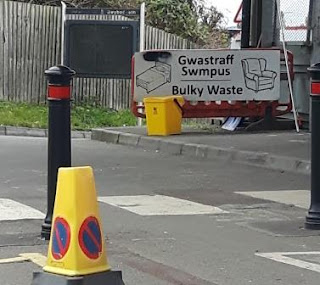 Another bit of normality was a cinema trip. I saw the new Dune movie with my friend Bryan. I am still processing my thoughts on it and will blog about it when I have time.
I engaged in a bit of retail therapy as well. Playmobil have released their version of the A Team with their iconic van and I went and bought one. It's fab! 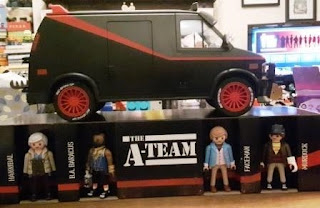 I also succumbed to temptation and bought yet another kit that I don't really have time to build - this time of a Treeman player to bulk out one of my Blood Bowl teams. 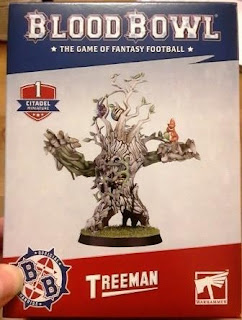 (Yes I bought him mainly because of the squirrel on his shoulder!)
Although, really, technically, I should now buy the correct team who would have a Treeman player in their team. But I have several teams who have never actually played a game yet...
One other thing we have started doing is sorting through my late dad's stamp collection with a view to selling it on behalf of my mum. It was very disorganised and needed quite a bit of work just getting a rough idea of what we have in the various boxes. We have managed to reduce the bulk of it down quite a bit - originally we had two full car loads of philatelic material.
I find it interesting seeing how much stamps have changed over the years. They are little time capsules that reveal a lot more about their cultural milieu than people might expect. For example, I found these stamps that were issued in 1979. This wording would not appear on a stamp today. 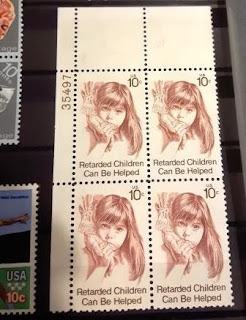 I'm going to keep some of the stamps. But not this one!
Posted by Jongudmund at 22:46 No comments: