Marking football history on my doorstep

With Barry Town not playing on Saturday, I took the opportunity to see my hyperlocal team Grange Albion play in the South Wales Alliance Premier Division.

Albion were away at local rivals Canton Liberals so it was a chance to chalk up a new ground as well. Literally! The game was the first match to be played on the brand new pitch that has been built for Cardiff and Vale College behind the athletics stadium near the Leckwith interchange.

The ground wasn't registered on the Futbology App, so I tweeted them the details and they added the ground and switched the match details. I feel I did my bit for the global accumulation of knowledge by sharing the information with them.

I set off early to find the new pitch. I knew it was near the giant dome that houses an indoor football pitch, just visible at the end of the road here. 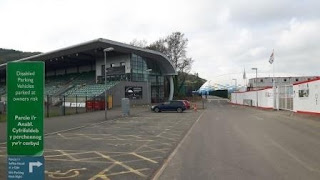 The building work on the right is for the new Fitzalan High School building. The plans look really nice.

My first view of the pitch was over the top of a scrubby pond.

I could see the back of the two little stands and beyond them some players warming up. The A4232 elevated ring road is behind the screen of trees on the far side.
They don't have changing rooms - they have a changing pavilion! (oooh) 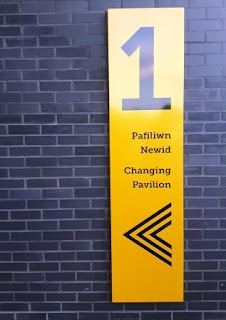 The pitch looked incredible, worth every penny of the £1 million I was reliably told it cost. 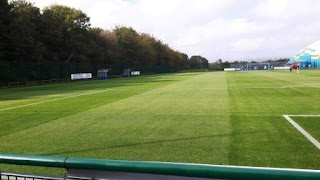 The match kicked off and Canton Liberals raced into an early lead. They were 3-0 up within 15 minutes and had missed a penalty in that time as well. They were a mix of goals - capitalising on a corner for the first, flowing moves for the second and third. The pick of the first half goals was the fifth one, which the scorer celebrated by doing a couple of back flips.
Grange Albion, in their all-red away strip managed a couple of forays into the Canton half, but it really was one way traffic. Whoever was updating the Cymru Football scores app got a bit excited though and added an extra goal so the half time score on the app was erroneously claiming the score was 6-0. 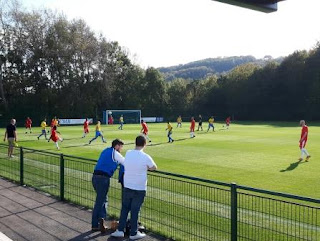 The sun came out and it got surprisingly hot for mid-October. I'd worn a big coat and ended up taking it off as I was sweltering in the west-facing stand. At the half time whistle, the players headed for the shade of the trees. Completely understandable because they must have been baking. 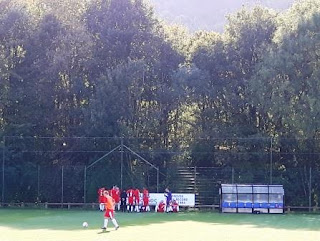 The half time team talk must have helped a bit, because Albion raised their game second half. The Libs added one more goal, to actually make it 6-0. But the damage had been done in that first 15 minutes. The Albion team looked very tired as they trudged off at the end. 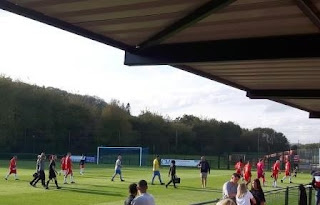 The Libs are second in the table and unbeaten so far this season, and it showed. They were a disciplined and purposeful team that played high quality passing football. Having a fantastic pitch is going to be a real boon for them if they continue playing like that.
It was a disappointing result for the Albion, who are struggling now at the bottom of the table. On a personal note, the disappointment was tempered by checking in on Futbology and getting a 'badge' for being at the opening match. 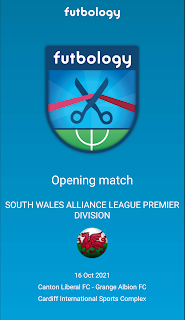 Because I'd been the one to tweet Futbology about the ground being opened, I feel I didn't just earn this badge - I made it happen!
I also got a bonus 'badge' for this being my 75th ground registered on the app. I have been to 9 new grounds this season (two of them with Grange Albion!). 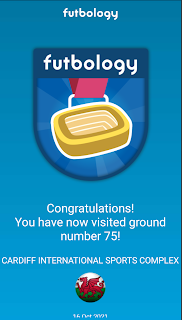 Getting a 'two-badger' was pretty cool. But I would rather have seen Albion win, of course.
Posted by Jongudmund at 22:10