Today was my last day at 1000 Lives Improvement. It's been five years and it was definitely time to move on. However, it's hard to say goodbye to people you have worked with and grown to care about. As Cathy pointed out, five years is the same length of time I was at secondary school. It's longer than my niece has been alive! So, it is a significant chunk of time.

Anyway, here are some high points...

Count me in
This was a big campaign shortly after I started to maintain the momentum of the 1000 Lives Campaign in the new 1000 Lives Plus programme. This photo is notable for my mini-sideburns and the blue jacket that I wore a lot to work events. 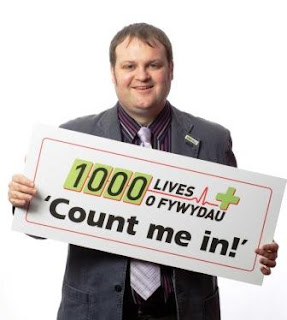 The STOP Campaign
This was the first time we really built comms into a clinical change programme. The mascots were fun to develop, especially the catheter (first time round it looked really rude). STOP won a CIPR Pride Award - I wrote a report on it if you want to know more.

Champions for Health
Another big campaign, this time looking at improving the health of NHS staff and encourage them to become advocates for healthier lifestyles. I took part in the pilot. (Blue jacket in the photo!) 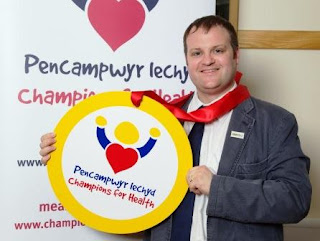 World Sepsis Day
One day I will blog about the car journey I had with Terence Canning, the Welsh ambassador for the UK Sepsis Trust. On that journey we coined a phrase that has appeared on numerous awareness-raising materials and has even been borrowed by other organisations. I had the poster on my wall by my desk at work as a reminder that good writing is often short writing. 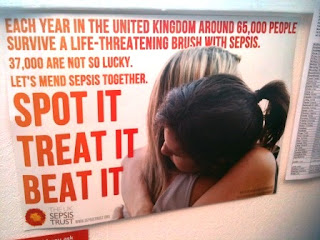 We also interviewed Terence for one of the videos we shot for World Sepsis Day.

The International Forum - London
Probably one of my favourite weeks at 1000 Lives was manning the NHS Wales at the IHI International Forum in London in 2013, with my lovely friend Kelly. Almost unbelievably, having spent 15 hours a day in each other's company we ended the week better friends than when we started. On the way down we decided our names weren't Welsh enough so we adopted the names Iolo and Myfanwy. Little did we know those names would stick.

At the end of the week we posed by the London Bus they had in the main auditorium. You can see how tired we were. 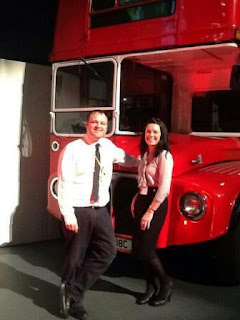 Dr Olivia
Towards the end of last year I spent nearly six weeks working on placement in Aneurin Bevan University Health Board. What with a Daily Mail hate campaign against NHS Wales, rumours about ebola, and a grisly incident involving a possible patient, it was a chance to experience the deep end of NHS comms.

We also got to film Dr Olivia's Guide to A&E - Is it really an emergency? I'm not sure how many videos I produced while at 1000 Lives. It's well over 100. This is one of my favourites.

Publications
In the past five years I've written six annual newspapers (plus three others) and 14 white papers. These are the latest ones. 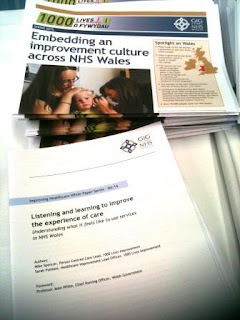 Legacy
I've left these on my desk to intimidate my replacement. 3 gold awards in 2 years is a pretty good return. (As the person who wrote the entries as well, I felt doubly satisfied with the wins!) 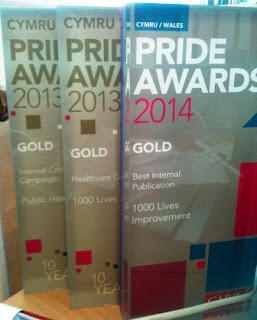 So, those are just some highlights. There were many more. It's been a good five years.

I've never been very good at giving things up for Lent. This year I decided to do something positive and wrote a letter to a different person every day. (Cathy did as well.)

Ignite Cardiff is a fabulous regular event which anyone can apply to speak at. I pitched the idea about speaking about the Lent Letters project and got accepted. I was first up on the night and you can watch my talk here - it's about five minutes long.


After the talk I had loads of very positive comments about it and several people said they were thinking of writing letters to people. So far two people have tweeted me to say they actually have done it, which is really lovely.

I asked Sim_n how many he planned to do and he said 7. This next chap went a stage further. 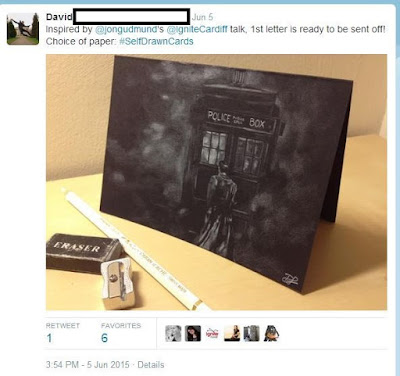 I think that's a really cool bit of art there.

One of the things many people commented on was how cool it was to get a hand-written letter through the post. Hopefully a few more people will have that pleasure soon.

(Not all post is fab post. Check out the barmiest junk mail I've ever received.)
Posted by Jongudmund at 07:33 No comments:

I like trying different types of chewing gum, For a while I've thought about doing a blog dedicated just to chewing gum, but that seems a bit sad. I'm not sure it's any less sad blogging about it on this blog, but anyway...

Why isn't cinnamon gum popular in the UK? Cinnamon candy, generally, is an American thing. I love Hot Tamales made by the Mike and Ike people, Just Born. I discovered those sweets on our California road trip and have eaten pounds of the stuff over the years.

But cinnamon doesn't seem to work as a candy flavour in the UK. A few years ago Wrigley launched a cinnamon flavour called 'Fire' in it's Extra range. But that was discontinued fairly quickly and it's been a long time since it was generally available.

Here are three types that are available.

The Wrigley's Big Red is an American import. It's pricey and it's full sugar. The Pur gum is one I found in a vegan shop a couple of weeks ago. It's tasty and sugar-free, but the flavour disappears quite quickly. The Chicza one is a bit hippyish as well. I bought it at the Eden Project and it claims to be made using traditional Mayan ingredients. Because they are all-natural it's one of the few chewing gums that's biodegradable. 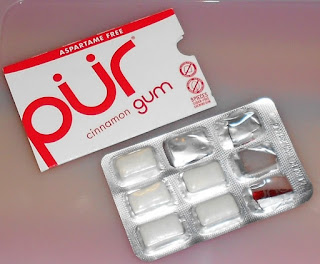 The Pur gum comes in a 'pill packet' meaning you pop out a caplet when you want to chew it. This has an advantage of meaning the gum doesn't go off when you open the packet. I reckon a good 20 per cent of normal chewing gum gets discovered, slightly soft, at the bottom of bags or in pockets and gets binned, so this is a good solution.

The Chicza stuff is a bit weird. It's very soft, meaning it feels like it's gone off a bit already. It's part of a range that includes mint and also lime for a tangy change.

And finally, for something completely different, how about coffee flavoured gum? This comes from Turkey, I think. Someone gave it to me a while ago for a laugh. The pellets are an attractive black and it comes in a box that looks a bit like a cigarette pack. 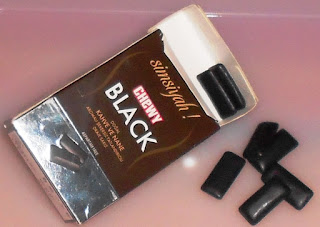 It tastes OK, actually. Like mild coffee or coffee cake.

So, there you go. The first blog post specifically about chewing gum. There may be more in future. (There's also a reference to some vaguely blasphemous gum in this blog post. Enjoy.)

Posted by Jongudmund at 21:43 No comments:

A collection of Shrewsbury scarves

I've recently had an article published on the When Saturday Comes website sticking up for half-and-half scarves, with a bit of history of the ones I own. Here are some photos and additional comments.

Half-and-half scarves, if you don't know, commemorate games between clubs. They often feature the date of the game. Here are the four I own. Two are from the same game.

I have some other scarves too. A vintage one from before the move to the new stadium, one that was for sale at the Wembley play-off against Bristol Rovers, and the 125-year anniversary scarf.

The Wembley one is a nice memento of a pretty horrible game. 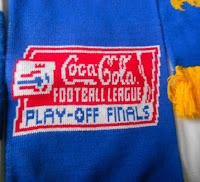 Generally in life you only need one scarf. But these are more than that. They are a record of fandom. With the demise of the much-maligned 'Clippy' the Lion from the club badge, there are new scarves being produced for the forthcoming season. I probably will end up buying one.
Posted by Jongudmund at 20:13 No comments:

Email ThisBlogThis!Share to TwitterShare to FacebookShare to Pinterest
Labels: being a fan, football, half and half scarves, my stuff elsewhere on the net, scarf, Shrewsbury Town, When Saturday Comes
Newer Posts Older Posts Home
Subscribe to: Posts (Atom)