It was a rare one. A February with 5 Saturdays in. I decided I wanted to try and see a game on all 5 Saturdays and I'm delighted to announce I made it! 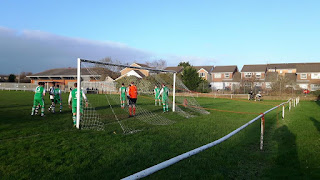 Grange conceded a late penalty to blow the chance of a third home win on the trot. This game also saw me achieve the status of number one fan on the Futbology App and the number one for their ground as well. 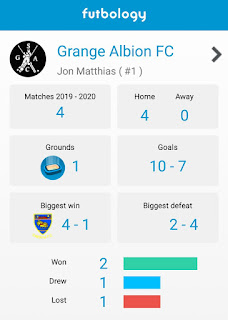 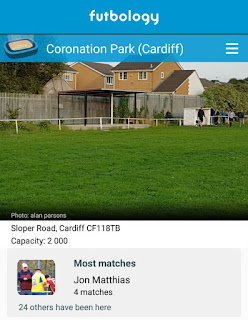 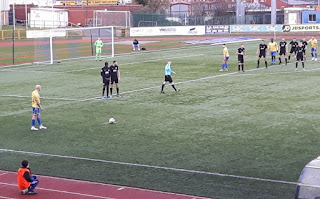 The evil battle giants of North Wales benefited from having the most one-eyed ref I've seen in a long time. A ridiculous red card for Barry striker Kayne Maclaggon got overturned on appeal and the ref was subsequently demoted from the Premier League list.On the plus side, David Cotterill (pictured), former Wales international, made his debut, and hit the post when he took a free kick with his first touch of the ball.

My friend Sara offered me her ticket as Storm Ciara was wreaking havoc, and Wigan weren't exactly a great proposition. Cardiff found themselves behind twice and then missed a gilt-edged chance at the end to seal the win. 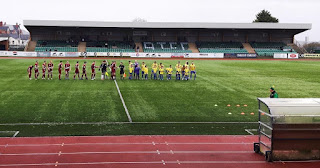 Another weekend, another storm, this time Storm Dennis. All the action happened in about 60 seconds of the second half as Barry finally converted their pressure into a goal, only to concede almost straight away from the restart. I went with my friend Mehmet, who is originally from Turkey and who I met in my Welsh class. It was his first game he had attended since moving to Wales. 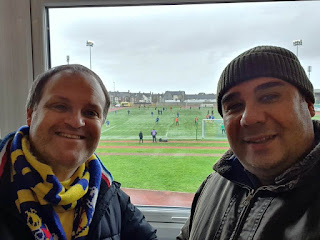 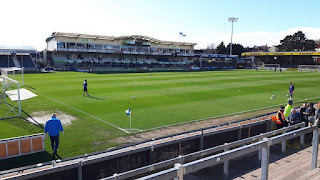 The Memorial Stadium is an odd place. Last year my friend Stewart observed that it looks like it's been built out of all the bits left over from other stadia. The executive stand looks like it's been stolen from a race track, and it was advertising Chepstow race course as well.

I sat with a new footballing acquaintance called John in the "permanent temporary" away tent. The alternative is the away terrace which isn't covered. It looks OK if the sun is out. We had icy rain just before kick off, and intermittently throughout the game. However, Shrewsbury won! And I think it's the first time they have ever won on a Leap Day, so a little bit of club history there.

And some personal history too: a Futbology badge when I checked in! 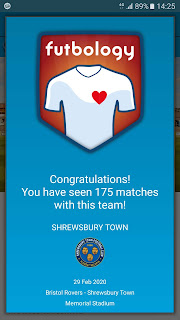 So that was my 5 Saturday February! I managed it, despite the best attempts of the weather. The next February with five Saturdays is in 2032. Hopefully football will still be around by then. If Shrewsbury and Bristol Rovers are in the same division 12 years hence they will probably be playing at the Mem on one of those Saturdays - this was the third year in a row they had met there in February.

Posted by Jongudmund at 22:42 No comments: