I watched more of the Women's World Cup than I expected to, mainly because England did better than expected. I started the tournament wanting Germany to win (as with the men's tournament last year), but England gradually won me round. (And of course, they have a Welsh manager so really their success is success for Wales too.) So, when England beat Germany for the first time in 20 attempts to win the third place play-off, I felt pretty happy.


I'll pretty much watch any football (as my season review for 2014-2015 shows), but this wasn't watching football for the sake of it. There was some good stuff being played and most of the time without the gamesmanship and injury-feigning that bedevils the men's international game.

I have some criticisms though. For one thing, the use of astroturf seriously damaged the aesthetic. Balls bounced oddly, or not at all, or fair flew across the surface at untrappable speeds. Clouds of black rubber bits were kicked up by the players. They were awful surfaces and didn't help enhance the image of the women's side of the game.

There were some duff referees as well. This happens in the men's tournaments as well because they want to include refs from all the FIFA federations. But, frankly, there is a world of difference between refereeing in a top European league and reffing in Oceania or central Asia. Some of the refereeing teams were out of their depth here, and this was possibly exacerbated by the use of female refereeing teams only. As with football, women's officiating is some steps behind the men's game, so the inequity between countries with professional leagues and countries that barely have a competition is even more marked in the women's game.

Finally, broadcasting-wise, it was great having mainly female pundits and anchors. But why they needed to ship male commentators (including the incredibly annoying Jonathan Pearce) out to Canada is beyond me. It could be argued that putting it's regular commentators on duty showed the BBC's commitment to treating the women;s game equally. But it felt like the BBC lacked faith in its audience. We'll watch women play football, but we won't listen to women talk about it. One thing I do hope is that the BBC will now use some of the very talented and knowledgeable women players from the world cup studios on shows like Match of the Day. They were so much better than the usual rent-a-gobs.

Laura Bassett is my favourite England player at the moment - in both the men and women's games. In the match against France she got elbowed in the face, got up and carried on, developing a black eye as the game progressed. She was very focussed, almost frighteningly serious during matches, so it was lovely seeing her smiling with her third place medal, especially after she had conceded the last-gasp own goal in the semi-final to gift Japan the victory. Anyone who can go out and play straight after that deserves a medal and she got one. 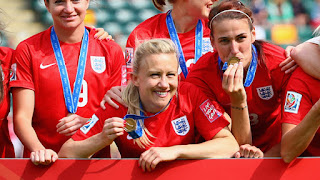 Lucy Bronze's goal that won the game against Norway was my favourite goals in all the games I saw. Not just because it was England, but because it was a 'worldie'. You don't see many worldies at World Cups, so this was a genuine rarity.

So that was the FIFA World Cup for 2015. We had one last year too. I can get used to this. What's happening next Summer?

Posted by Jongudmund at 22:11 No comments: