Another sportsman with a weird name

I was watching the baseball at breakfast yesterday. NY Mets v Detroit Tigers. Stepping up to the plate was the new Mets star-in-the-making Angel Pagan.

Yes, that's right Angel, as in heavenly messengers sent from above, Pagan, as in pre-Christian tribal goddess-worshippers. Although to be fair he is Hispanic, so it's pronounced Ang-hel Pah-gahn.
But even so, a quality juxtaposed name.
Posted by Jongudmund at 07:44 No comments:

According to the TV spots, Twilight Eclipse is the movie "the whole world is waiting for".

There really isn't enough satire in the world to properly flame that claim. But there will be enough giddy teenage girls and covetuous cougars swooning over young ripped boys pretending to be were-wolves to make the box office figures bankable.

I fear for our culture, I really do.
Posted by Jongudmund at 07:40 No comments:

Funniest name at the World Cup? Got to be Chile's central defender Waldo Ponce.

Just in case you want to go Ponce spotting here's a picture of him.

I tried to find a picture of him with his back to the camera so you could see his shirt with 'Ponce' written on it. But no such luck. Nice headband though.
Posted by Jongudmund at 23:01 No comments:

This was a powerful, emotional, tense film that left me feeling a bit drained by the end. One of those films where you're glad you've seen it, but you can't really say you've enjoyed it.

Set in the 1982 Israeli invasion of Lebanon, what this film really captures is the chaos of modern warfare, and how the main protagonists don't have a clue what is going on. In this case, everything is seen through the experiences of a tank crew, who don't leave their tank during the whole film. Their only contact with the outside world coming when the hatch on top opens, or viewed through targetting scopes. And much of what they see is hauntingly horrific.

Ordered around by a professional paratrooper major, the tank becomes a carrier for the dead, and a prisoner transport. But who are really the dead and the prisoners? The real thrust of the film is that even those who survive in war die somehow in the process, and whether you're driving the tank or chained up to the steam-pipes, you are still a prisoner.

It's all in subtitles. It's dark inside the tank. There's no way of knowing what's going on. As a film it's got it's limitations. But as a raw statement about being caught up in events you don't understand and cannot wrest control over, it is outstanding.

Jongudmund's rating: 9/10 Only see this if you're prepared to think about it afterwards.
Posted by Jongudmund at 22:25 No comments:

Gig review: Florence and the Machine at Cooper's Field, Cardiff

This was an eagerly anticipated 'massive' gig by an artist I have a genuine respect and deep-down love for, and yet I was left quite disappointed by it.

For one thing if you're going to pay £30 for a ticket (once you add on the 'booking fee' aka 'being screwed by the ticket office fee) you expect to be able to hear the freakin vocals. Unfortunately the punch drunk baboon on the sound desk had only been given rudimentary training in knob-fiddling and so the resultant sound was something akin to listening to a car radio underwater. When she spoke between songs she may as well not have had a mike at all.

Or to put it another way it reduced the gig rating in my estimation from a potential 9.5/10 to a barely scraping it 6/10.

The energy was there. The crowd were there and loving Florence in all her dippy, dreamy wedding-dress-wearing kookiness. But it's a good thing that the crowd drowned out Miss Welch during the big hits because that obscured the terrible PA job.

And it was some crowd, crushed into a sweaty, claustrophobic rubbery canvas tent that seemed to keep the heat in, but let the sound out. (I think that was part of the problem. Canvas walls don't reflect audio waves the way walls do.)

So all in all I felt a bit let down.

(It also means I want to see her again somewhere where they get the vocal mix right.)
Posted by Jongudmund at 22:14 No comments:

I bet there's a sign that says 'Don't touch' 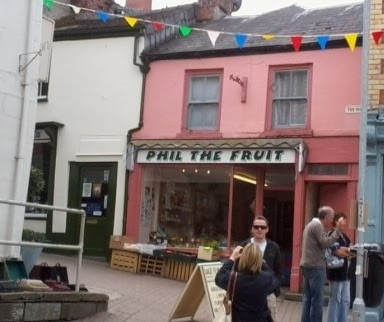 (Spotted on our recent book group trip to Hay on Wye.)
Posted by Jongudmund at 07:42 No comments:

The art of caffeinated seduction

What would you do if, late at night, someone invited you in 'for a coffee' and then produced THIS? 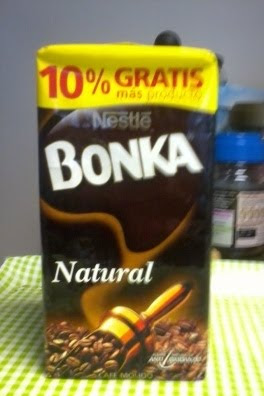 Although he is overly self-effacing to the point where I almost think that he really does believe he's amazing, but thinks it's better to say he doesn't, Dan Piraro is one guy who often manages to come up with something that makes me think.

In this recent blog post he makes some incredibly insightful points about the whole Catholic priest child abuse scandal. It's probably the best, most even-handed commentary I've read, and from someone who has wandered out of that particular flock. And he may have a point - did people join the priesthood hoping it would protect them from their own sinful natures?

He's left me wondering whether when a scandal breaks like that, does that mean the person has failed the church. Or has the church in some way failed the person too?
Posted by Jongudmund at 20:50 No comments:

There isn’t really any way that I can brag about this on freelance theology, so I’m talking about it here. In one of my recent interviews with UCB as Jon the Freelance Theologian, we talked about the gender of God, and specifically how sometimes thinking about God as male is unhelpful, and it’s okay to think of God as female.

Apparently they had a lot of feedback, including the head of a Christian group I’m not very keen on at all who said that he hadn’t heard the programme but he knew it wasn’t the sort of thing that should be discussed on UCB.

There’s a little part of me that is really cheered by the thought that I am annoying people who annoy me on a regular basis by promoting a version of my faith that is intolerant, unloving and bigoted. Job well done. Also I love the fact that this is true to form - 'I didn't hear it myself but if I had I'm sure I would have been offended...'

Plus when I told Cath it made her happy too. So a happy household all round.

(If you're interested, here's the original article about the gender of God on freelance theology - feel free to read and comment on the site)
Posted by Jongudmund at 17:13 1 comment:

Deliberately disbelieving in the devil

Find out why I don't believe 'in' satan in what is probably the longest article ever on freelance theology (based on one of the hardest talks I've ever had to prepare for life group).

Apparently this is based on a comic strip that I haven't seen, and evidently it's the first in the summer slew of OTT action flicks to hit the screens, and maybe it's the one people thought would be weakest so they put it out first.

++++SPOILER ALERT++++
It's also pretty violent for a 12A. Although I objected less than Cathy did to the way one of the bad guys met his end. And for once a traitor was actually a traitor and it wasn't all an elaborate double bluff that was revealed right at the end.

There was plenty of humour too. I loved the bit with Jenson singing Journey in the lift. Watch it if only for that and the line "Do you like the angle of the dangle?" The shoot out with fingers was very clever too.

Jongudmund's rating: 7.5/10 Surprisingly good.
Posted by Jongudmund at 22:17 No comments: