Wales is back in lockdown, although this time it's got an end date specified from the outset. The Welsh Government has branded it a "Fire Break". We are all supposed to stay indoors and not see people.

I know people who have really struggled with all the restrictions placed on us during the pandemic. I've talked to friends who were desperate to go to a pub as soon as pubs reopened, and who were equally desperate for their children to go back to school. It was hard on people to have their children at home all day, seven days a week.

As someone with a lot more introverted characteristics than are obviously apparent, I don't mind not seeing people. In fact, the summer just gone was one of the few summers where I have felt free to sit indoors on gloriously sunny days and not feel like I was somehow wasting the good weather by not being out in it. I'm an indoor person, quite happy working in a bunker with no windows.

I've also been free of the pressure to socialise. I can be sociable. I like people and I like meeting up with them. But I find big groups harder to deal with. It takes energy. Some people get energised by walking into a room full of people and talking to everyone. I'm the reverse. That's not how I recharge after a hard week. The lockdown removed some of that pressure to be outgoing and expend energy on group situations.

I have enjoyed having more free time with less guilt that I'm not out doing stuff. My lockdown project - to blog about 394 baseball cards featuring Tony Gwynn - has exceeded expectations. I met my target after 152 daily blog posts, and am continuing both to blog and to accumulate more cards. I have also heavily modified a Lego set (actually combining two Lego sets) to build a big station building for my Lego train. 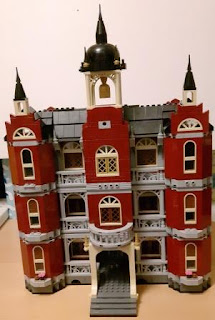 I haven't written a draft of a novel or a screenplay, or anything, but my creative output has been higher than for a good number of years. I've felt like I've had permission to stay inside and do things I enjoy.

However, there has been a trade off. I wrote back in May about the fractional losses from the pandemic. We have experienced a few more of those recently.

Some friends had twins a couple of weeks ago and we have admired their cute little faces through a window. We have no timeline in place for actually holding them. One of our best friends is turning 40 during the fire break and we are not allowed to party with her. Similarly, our godson is hitting double digits and Cathy's Grampy is having a birthday too. The football season has kicked off but the teams I support are playing behind closed doors. My work colleagues had some fabulous success in some industry awards last week, and we all had to watch in our own living rooms instead of clinking beers together at a fancy soiree.

Overall, I would trade the small freedoms I've found in lockdown for being free of the threat of Coronavirus. While I have enjoyed having time to myself, I would like that to be something I choose rather than imposed by a viral threat. I really hope this fire break works.

Today I had back-to-back meetings on Skype for Business, Microsoft Teams and then Zoom. I could do comparison of all three. I'm not going to. Those kind of things have been done to death.

It's been almost seven months now of working from home and virtual meetings. From my perspective as a meeting co-ordinator there are some real positives. It is a lot easier to get people together from the further flung corners of Wales to discuss aspects of work and contribute to joined up working practices. Another six months of this and we will have delivered on projects that may never have got sorted without the option of 'meeting' virtually. We have also been able to establish a weekly 'team meeting' that has brought together people in similar roles to me and helped us to get to know each other better, offer support and advice on stuff and be sounding boards for each other.

But I miss real-world meetings. I miss the corridor conversations either side of the meetings where I learned useful sidenotes on what was going on. Never underestimate how much intel you can gain on a three minute walk to the car park with someone you otherwise will just never see. I also miss the processing headspace on the drive home after meetings, or driving between meetings.

Virtual meetings are more tiring. I'm not the only person who says this. Even though you can safely discount a good ten per cent of the meeting time due to someone, or several people, having tech issues or speaking while on mute. (This meme really made me laugh!) 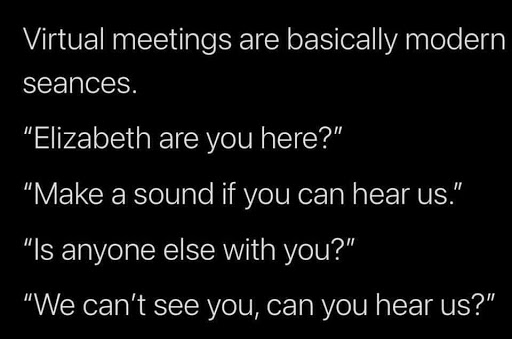 Days when I have screen meeting after screen meeting I feel relieved to reach the end of my working hours. I think it's the level of mental processing needed, and the type of concentration required. Someone should really do an analysis on the psychological effect of virtual meetings and the differences between real world meetings.

We also need to factor in comfort breaks. That's something that is easy to forget! If I don't answer a question during a meeting, odds are it's because the coffee I started the meeting with has made its way through my system! Regardless of the technology being used, biological processes remain the same.

Posted by Jongudmund at 20:54 No comments: