2 gems from the WSC Weekly Howl

The first rule of proof-reading - always check the headings!

Secondly - whose idea was THIS?

Available on Amazon
Posted by Jongudmund at 23:41 No comments:

Email ThisBlogThis!Share to TwitterShare to FacebookShare to Pinterest
Labels: Christmas, football, proofreading, surely some mistake, tat, what were they thinking, When Saturday Comes

The romance of the cup

When the mighty Shrews were drawn away against Newport County in the 1st round of the FA Cup, I was pleased. Talk about a quick trip to see them play. Short of a possible draw against Cardiff I don't think they will be any closer to my house this year.

However, compared to my last away trip (the Emirates!), Newport Stadium was a bit of a rude return to life on the road as a Town fan. It's basically an athletics stadium and we were in the 'away end' - banks of temporary seating on the running track, next to a netting construction I think was a hammer-throwing cage. 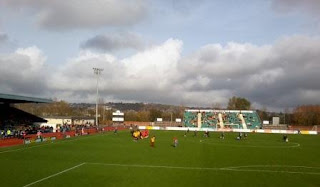 The opposite end to us was a similar uncovered stand - so this is what our end presumably looked like from a distance. 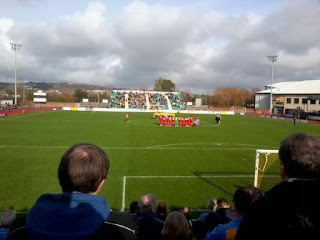 We were very close to the pitch, though. I took this picture as the teams observed a minute's Remembrance silence.

The match kicked off at 12.30 - moved because ESPN decided it was the pick of the first round ties to televise. That should have been a warning to me. I have seen Shrewsbury play in three games that have been televised live and they have all been dire. Many moons ago I saw Shrewsbury's first ever live match on Sky - a grafted 1-0 win at Cheltenham. Then, eight years ago I was at the Gay Meadow when we were drubbed 4-0 by Chelsea. (Although, admittedly, Gianfranco Zola's goal is still talked about reverently by Town fans.)

The plus side though was getting close to the ESPN broadcast demountable and seeing the FA Cup in all it's pomp, perched within range of an errant clearance. You can just about make it out in this picture - on reflection, I could have taken one close up. But the guy behind me confidently told me that it was only a replica anyway. Still, I would have dearly loved to see a shanked ball go crashing into it, iconoclast that I am. 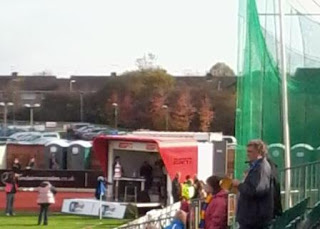 Today's TV outing will do nothing to raise people's expectations of the team if they had the misfortune to tune in. It was a Godawful performance on an oily pitch playing hit and hoof. When Town scored we couldn't see initially because it was up the other end, but that was about the only thing to shout about.

It really seemed that the Town players' touch had deserted them. In fact, for the first time ever at a football match I was a bit worried about the safety of my dependable VW Golf, because our defenders seemed determined to launch as many clearances into the car park as possible.

John Barnes and Martin Keown were summing up for the telly. Goodness knows what they made of it - the comments in the stand were pretty negative! Barnesy got asked to rap for us and got a short chant of World in Motion, but didn't oblige. We didn't ask Martin Keown to perform.


The results will show that Shrewsbury scraped a win, and in the long run that's all that matters, I guess. But to do it in such an artless style, doesn't fill me with confidence. There wasn't a gulf in class and Newport can consider themselves unlucky - only a fab save by Town 'keeper Chris Neal kept them out in the second half.

It's strange, but I think County fans will be happier with their team's performance in defeat than I was with our team's win.
Posted by Jongudmund at 20:57 No comments:

Spotted this in Tesco. It made me laugh. 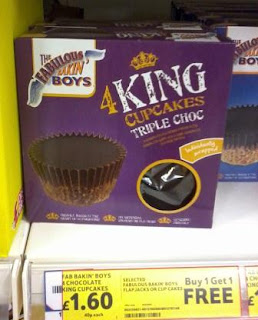 Our first ever hi-fi as a married couple

After almost 17 years together and just over 14 years married, Cathy and I have purchased our first hi-fi as a couple.

It's strange that we haven't bought one before, given how often we have music on. We bought (and played out) several of the small all-in-one units in our kitchen over the years. But this was our first 'front room hi-fi'.

It's taken us a while to get it. We decided to get one last year as a Christmas present to each other.

This is what we were replacing. 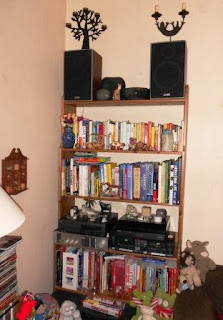 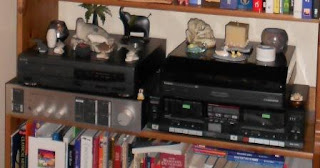 The tapedeck was my Dad's, bought back in the 80s, and as dead as a Monty Python parrot. The Pioneer amplifier I bought for a tenner from a friend in about 1993, but as it had originally been his family's stereo, then his, that must date from the early 80s too. The CD player and record player I bought in my first term in my first year at Uni.

Cathy helped me carry the CD player home from the train station to the house I was lodging in in Llandaff North. We'd just started going out. She thought I was crazy blowing my money like that, but as my diet was predominantly Heinz spaghetti hoops on toast, I could afford it. (I didn't like using the temperamental gas oven in my student house. You had to reach right into the back to light it with a match and I was afraid it would blow up and burn my arm off. Hobs were safer. I ate a lot of hoops.True story.)

I bought the record player a week later, because I was a muso and I liked to buy limited edition coloured vinyl singles. I presume the turntable still works. I haven't used it in years. The CD player is okay - occasionally sticky. The amp fades in and out and you have to twiddle the volume knob to get it to function. I'll probably freecycle them as someone could use them.

Anyway, that was about half our lifetimes ago. So, today we went and bought a micro hi-fi that cost less than my CD player separate did back in the day. It can play CDs and you can plug a USB into it - a technology that was simply science fiction when our old hi-fi was built. 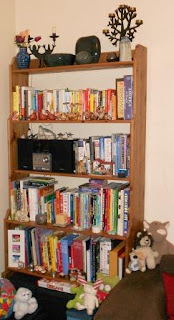 It's freed up some space, which was easily filled. It sounds amazing. Happy Christmas to us 10 and a bit months later!
Posted by Jongudmund at 22:03 No comments:

My Dad uses an old 35mm camera, and then has to take the film in to be developed. He likes to tell people about this. He says he's the last person using film in Shrewsbury.

Anyway, this cartoon really reminded me of him. 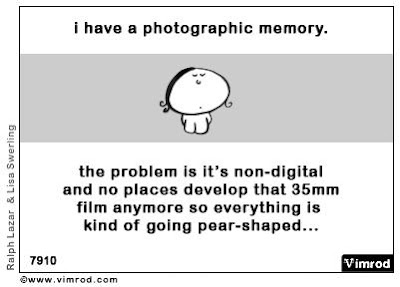 Posted by Jongudmund at 21:07 No comments: