Summer of science fiction (and superheroes)

I've seen a goodly number of science fiction films over the last few months, from the summer through to now. I've seen most of these with my cinema buddy Connor (shout out), who may yet revive his blog and give his verdict on these films.

Avengers Assemble - I liked this a lot. Lots of action. Smart script. Humour. Built well on the preceding films. Probably one of my favourite superhero films to date.

The Amazing Spider-Man - I wasn't sure about whether this film would work as it seemed too soon for a reboot. But it was pretty good. I preferred Andrew Garfield to Tobey Maguire. The pace was quick. Aunt May wasn't as annoying. It had Martin Sheen in. The only let-down was the villain as The Lizard just doesn't have the same screen presence as Green Goblin.

Prometheus - Just about everyone I've spoken to was disappointed with this. I spent most of the film thinking about how it could have been a better movie. That's a bad sign. Perhaps the pre-event hype got to me. I do think, though, that the major problem with this was the characters doing completely nonsensical things. Science fiction is usually nonsense, but its characters have to follow the internal logic of the movie for it to work. This didn't.

The Dark Knight Rises - Meh, Batman. I went right off this after The Dark Knight. I went in the hope it would be a redemptive moment for the Batman series. It wasn't particularly  and the underlying political message was ropey. Apparently if the proles ever rebel against the downtreading classes, the result will inevitably be anarchy. Batman is a protector of the privileged because without them society would slide into chaos. Seriously.

Total Recall - I enjoyed this. There were a few nods to the Arnie original. The central gist of the story was a bit confused (and physically impossible), but the tech was cool. I want a hand phone. Definitely better than expected for a remake.

Dredd - I've reviewed this on the blog. A brilliant rendering of the original comic books, but gory and nihilistic. Not a feelgood movie, but one I want to watch again.

Looper - I'm still trying to work out whether this worked or not. Time travel movies tend to fall down when you try and piece together the timeline after all the monkeying about. But it was very well made and acted and I really liked it, so would recommend it and would watch it again.
Posted by Jongudmund at 22:30 No comments: 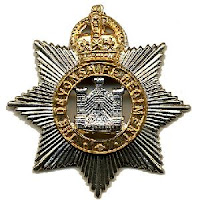 They shall grow not old, as we that are left grow old:

Age shall not weary them, nor the years condemn.
At the going down of the sun and in the morning,
We will remember them.


I had the privilege of attending the Laying Up of the Standard of the 12th Battalion The Devonshire Regiment (Airborne) at Exeter Cathedral last week. It also marked the disbanding of the ex-serviceman's association linked to that battalion - which was the unit Cathy's Granpy served with during World War II. 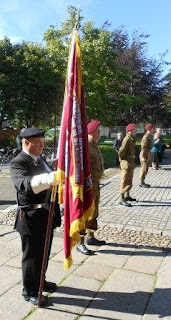 The Airborne were the guys in gliders who landed in Northern France on D-Day to establish bridgeheads, most notable at Pegasus Bridge. Granpy's unit fought in the Ardennes and crossed the Rhine. They were among the first British troops to pass concentration camps, which they had to walk past leaving the forces coming behind them to liberate the prisoners. After marching across Europe they ended up somewhere on the shores of the Baltic where they were mistakenly shot at by Red Army soldiers.
Granpy doesn't talk much about the war, or the time he spent enforcing the British mandate in Palestine in the years after VE Day. When he came home he wanted to forget about what he called the worst time of his life. He only got involved in the Association of those who served and survived relatively recently.
It was poignant to see him standing among the handful of men who are left from the battalion. Many wore their medals. I always find it difficult to express the gratitude I feel to all those who left the safety of their homes to do the unthinkable, to shoot and be shot at, to risk death in gliders crash-landing at night in occupied territory.
It was an honour to go and see the Standard committed to safe-keeping in the Regimental Headquarters and to sing the regimental hymn alongside these soldiers who have grown old, against all odds; to recognise their bravery and sacrifice. 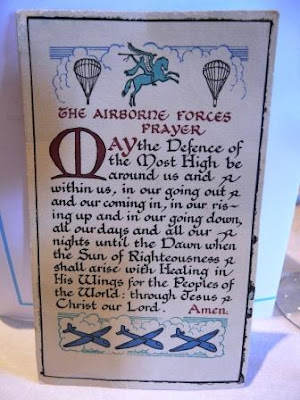 Posted by Jongudmund at 22:11 No comments: