My 39th birthday - Ward Thomas in concert in Cardiff

In January I got some health news that I wasn't expecting and the medical staff were a bit concerned about how bad it could be because I was "on the cusp of being young." Yeah, baby! Still on the cusp! It was the best bit of news I got during the whole encounter.

But anyway, I'm definitely on the cusp now as I turned 39 yesterday. I had a great day overall (more details on that soon) and to top it off I went to see Ward Thomas play The Globe in Cardiff.

This was a great combination of my favourite music venue in Cardiff and one of my favourite bands at the moment. I first heard Ward Thomas' single 'Push for the Stride' on Radio 2 last year (forget what I said about being on the cusp of being young; yes, I quite like Radio 2), came home and listened to it several times on YouTube. I bought the album when it came out. And I was very excited last December to find they were playing in Cardiff on my birthday. We booked the tickets straight away.

I also persuaded a motley crew of friends to come with me, but they aren't in this photo of me with Ward Thomas that I got after the show! 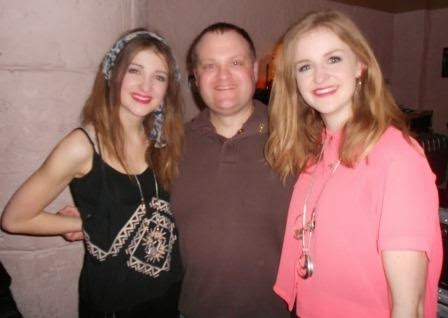 They were really lovely to talk to. It's always nice when people you admire turn out to be nice people. It was the last show in the tour, they'd just played a great set, they had talked to a huge queue of people, but they couldn't have been more genuine or friendly.

Thank you Ward Thomas, you made the last birthday of my thirties really memorable.
Posted by Jongudmund at 21:52 No comments:

The barmiest piece of unsolicited mail ever

Back when I worked in a faith-based family charity we had an elderly guy write to us pitching his book. His basic premise was that the church was dying out because Christians weren't having enough children. He felt this was an urgent problem that he could do very little about because, as he explained, he was 89, as was his wife who had been severely incapacitated by a stroke.

It was my job to write back to him and decline the pitch. The other thing I remember was he felt contraception was one reason Christians didn't have large families any more. The chapter title for that was "And the Devil Waved a Condom".

That was probably the craziest piece of unsolicited post I've ever been sent, until today, when I got this. 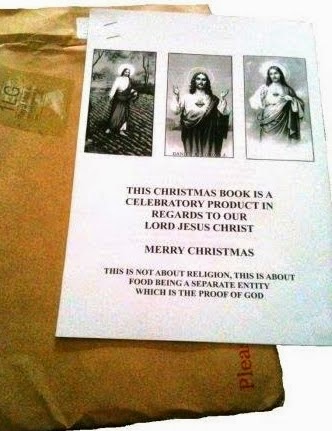 It's 16 pages of unconnected ramblings about God that seems to think it's proven the existence of the Almighty. The key 'proof' is that human beings have evolved and sources of food have evolved and the likelihood of both evolving is so unlikely there must be a God. Convinced, yet? No, me neither.

Here are some sample bits from the document. This is a very odd introductory semi-disclaimer. 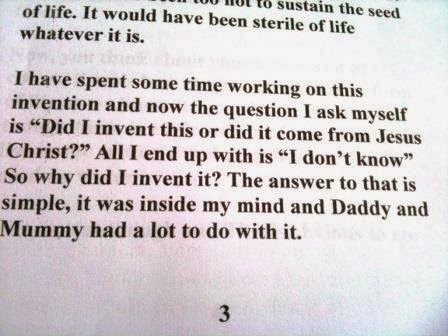 Yes, why did you invent it? Well, anyway, I'm sure your Mum and Dad are proud. Then there's this non-sequitur...

Yes, you've dismissed the equation of God and so we need the electric chair. Huh? Next up there's some quality scientific reasoning. 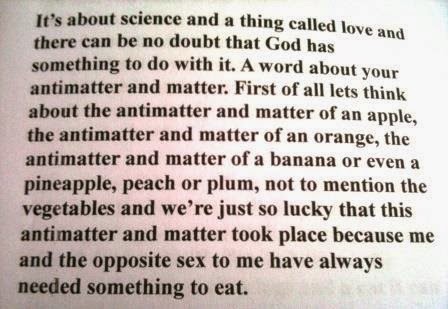 It's about science! And then we have this last bit which has the most bizarre concluding sentence ever. 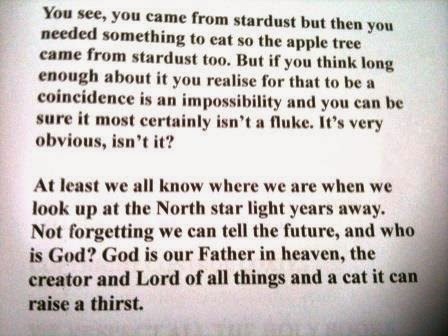 So, cats getting thirsty is evidence for God. I think. Who knows what he means there?

Anyway, the whole thing concludes with a plea for assistance in getting this published and given to every schoolchild in the land. Tempting as it is to get back in touch and see if there is any more laugh out loud nonsense to read, I don't have to (unlike devil-waving-condom guy), so I think I might let this pass.
Posted by Jongudmund at 15:37 No comments: