The best company NOT to work for

I was told about this a while ago but forgot to look it up.

The charity which made me and 30+ other people redundant 2 years ago has included a picture of me in its most recent review. I'm on page 8.

The irony is it's about the 'Best Company to Work For' Accreditation that I helped them achieve. No mention on that page or anywhere else that I no longer work for them. Or why I left. Or how many people left with me.

Incidentally, it's not that they used the picture that bothers me so much. It's just I know plenty of people who still work there and nobody bothered to ask if it was okay. Which is a bit insensitive. (But I guess sums up the decision-making and management style I disliked when I was there.)

Ah, well, I've moved on to something better and enjoy my work a lot more now. Things like this encourage me that it was for the best.
Posted by Jongudmund at 23:39 No comments:

We moved into our current house in 1995. It's now 2012. For those not good at maths it's now 17 years since the previous occupants moved out.

That didn't stop the Department of Work and Pensions sending a letter to our house addressed to the previous occupants this week to advise them about claiming winter fuel payments.

Here's the thing. Firstly, it's summer, so why write now? That seems a bit daft. Secondly, how old is the database they are working off and how few checks do they run? It's not as if the government has an easy-to-access database of where everyone lives in the country, oh wait, yes they do - in fact they have several, council tax details, the electoral roll, the two census forms I've completed since moving here, the land registry.

Sometimes people expound ludicrous theories of government conspiracies, but given that some government departments seem unable to post a letter correctly, I think we're safe. The really scary thing is that government agencies can be so ineffective and useless.

(And, yes, I know, it's impolite to open other people's mail, but when you pick up the post you don't think it's going to be for somone who moved out nearly two decades ago.)
Posted by Jongudmund at 23:52 1 comment:

The long road to the Olympics

My Olympic tickets have arrived, for events in the Millennium Stadium, Cardiff. This is approx a mile from my house, maybe more, but certainly less than 2 miles away. When I go to events there I amble quite happily. It takes about half an hour max - even if I have to walk round the stadium to get in the other side.

The Olympic organisers are very worried,though. They keep emailing me asking if I've planned my route yet and telling me to research it thoroughly in advance.

Maybe if the emails weren't being automatically generated by machines, I wouldn't get the frankly ludicrous emails. But then, machines only do what they are told to. The stupidity is human.

Posted by Jongudmund at 22:57 No comments:

Location is an important element in advertising

Nothing wrong with this poster. I'm sure any woman would appreciate the chance to shine for summer 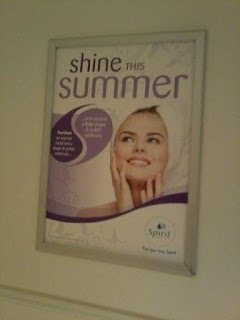 Especially the women standing up to pee... 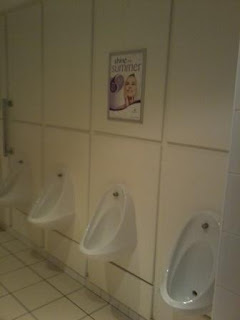 Posted by Jongudmund at 23:35 No comments: