Can you feel it? Well, can you?

Yeah, yeah! My t-shirt concept got made at Fair & Bare. Go buy one now and experience the kind of lovin' only we Jedi know! 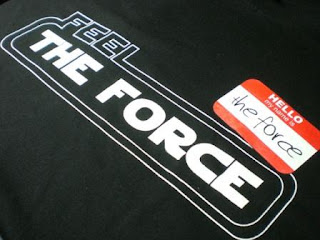 Email ThisBlogThis!Share to TwitterShare to FacebookShare to Pinterest
Labels: I'm a copy-writer for hire dontcha know, my stuff elsewhere on the net, Star Wars, T-shirt

Matt put me on to the Cake Wrecks blog, which is just culinary art at it's most awful. But they also showcase some amazing cakes, like these wicked cupcakes, which I think are possible the coolest cakes I've ever seen! 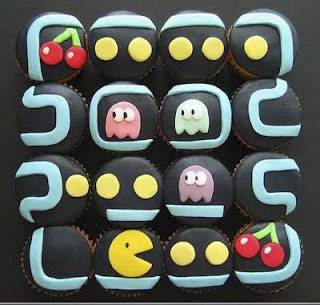 And at the risk of seeming like a Dalek obsessive, check out the gallery of Dalek cakes to see some cake wreckery of such awesomeness it defies adequate description. I especially like the final line referencing Empire Strikes Back: "Bad Space Snake. Bad."
Posted by Jongudmund at 23:13 3 comments:

My friend Matt has given me a car air freshener in the shape of a Dalek (apparently because his wife didn't like the smell). So now I have a little Dalek on my dashboard, who swings left and right depending on whether I'm going round a corner*.

The only drawback is that he is a bit smelly. I had to apologise to my car-pool companion the other day for the overwhelming 'fresh' scent when we got in the car to go home. Cathy has also remarked that "Daleks smell much fruitier than you'd have thought they would..."

*And, mysteriously, he sometimes just moves round eerily slowly when I'm stationary at a traffic light... Not quite sure what's happening there.
Posted by Jongudmund at 13:03 1 comment:

Three interesting/fun things about the US election

I’ve been feeling a certain amount of shameful joy/glee that the state of Colorado went Democrat. It’s the home of Focus on the Family and various other militantly-Republican Christian organisations, so the fact that more people there voted for Barack Obama means something significant I think.

I’m wondering how the editorial in the next edition of Focus’ ‘Citizen’ magazine will react to the results and whether Focus will now concentrate their efforts on living up to the demands of this Biblical injunction. Somehow I doubt it.

The swing to Obama was massive across the Republican heartland. I work with a guy who spent some time in Texas working for a Christian organisation and became very pro-Republican as a result. In 2004 he said that he admired George W Bush’s stance on “values” (a hard-to-define term much in use among those who have the Christian = Republican = Christian mentality).

However yesterday this same guy told me he was glad Obama won. If Obama is winning over staunch conservatives, then maybe there’s a chance the cultural battle-lines are blurring and the polarisation of American culture (which has led to Christianity marginalising itself through unblinking support by many vocal Christians for one particular party) may reverse.

The third thing is that Cathy told me Obama had promised his daughters that if they moved to the White House, they could have a puppy. How happy must they be now? No wonder as the results came in they were still beaming from ear-to-ear despite looking like they so needed to go to bed!

“Yay, Daddy’s become president! Can we get a puppy now, Mom?”
Posted by Jongudmund at 17:40 No comments:

Firstly yesterday I had the sitcom script I wrote with Justin returned by the BBC Writer’s room with some very encouraging comments written on it, including “you demonstrate a flair for comedy that’s certainly worth developing”. The script-reader also said it made her laugh out loud at points which she said is unusual for a first-time comedy script. So, we've got some stuff to go on there, I think.

The second thing is, of course, Barack Obama’s victory in the presidential election. I felt unbelievably tense last night because I so wanted him to win (I have done ever since I read his book in the summer). I don’t think I’ve prayed/pleaded so much over one thing in absolutely ages. When the election coverage began and people started saying it looked like he was on course to win, I felt even more tense. What if it all went wrong? What if the exit polls had messed up?

Anyway, I went to bed and this morning turned on the TV to find out he had won. The feeling of relief! The sense that now things may well change, and also that ordinary Americans had actually done the right thing and voted for the right guy kind of rebuilds that faith in Americans which I for one want to have.

I’ve fallen in love with America over the last couple of years and as a nation it deserves a president who is going to encourage it to shine as a beacon of hope, freedom and democracy in a sometimes very dark world. It may take some time to take off the tarnish of the Bush years, but this is such a step forward in terms of America’s stature and the perception of America out here in the rest of the world.

I tried to explain this to my American car-pool buddy this morning, but I think it might have come across as vaguely patronising. It’s hard to explain why something like this feels like a great weight has lifted off my shoulders. It’s that elusive thing called hope.
Posted by Jongudmund at 18:38 2 comments:

Here's a pic of Cathy as an onion ring angel at the Red Rock Brewing Co in Salt Lake City. 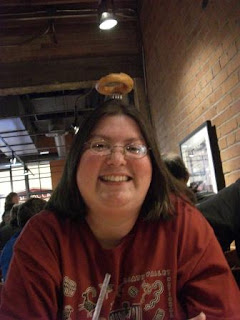 I love this picture.
Posted by Jongudmund at 13:37 No comments:

The idiots are winning (but they'll still lose)

What gets me most about this news story about councils banning Latin terms is that most of the Latin terms they mention are now accepted English usage, like ad lib, for example. Most people wouldn't even think of it as Latin.

And as for the comment "the ban might stop people confusing the Latin abbreviation e.g. with the word "egg". " Well, maybe, but realistically, people will have to learn at some point that you spell egg with two gs.

This does seem to me to be mollycoddling people in their ignorance, rather than educating them to a position of knowledge. But maybe councils prefer keeping people in the dark, rather than empowering them with understanding. Knowledge is, after all, power. And councils don't like empowering their tax-paying citizens. It's so much easier to keep people under your thumb when they don't know they have alternatives...
Posted by Jongudmund at 18:16 No comments:

As regular readers of my blog will know, I quite like the Canadian band The Tragically Hip. Unfortunately getting their stuff over here isn't that easy, so as my sister-in-law, Abby, was going on holiday to New York a few weeks ago, I asked her to hunt me down some albums. She duly did, filling two gaps in my collection.

I've done this with bands before - retroactively collecting the back catalogue - and yet again I find myself tracing the musical evolution of a particular sound. One album Ab got me was the Hip's eponymous debut, and you can see how on a few tracks the riffs and melodies were precursors to the songs which appeared on their second album, Up to Here.

But the other interesting thing is hearing the progression when you listen to their first four albums in a row. By the time you reach their fourth album, which could arguably be considered their best, they have defined their own sound to the point where playing the first and fourth albums back-to-back sounds like playing albums by different bands. But they had to produce the one in order to get to the other, and that later sound couldn't have happened without the earlier, more-amateur record being made. Well, I find it interesting...

The other thing is that in the other album Ab got me is a card denoting me as a member of "The Hip Club". Oh, yeah.
Posted by Jongudmund at 23:11 No comments: