Cathy brought these Walkers Max double coated peanuts home for me to try (and to blog). They're something a bit different. 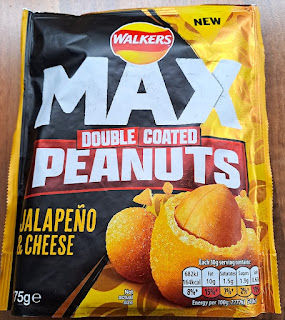 The description on the back sums them up. They are roasted peanuts in a crunchy shell dusted with a cheesy jalapeno flavouring. They make good on their promise for "max crunch" but they aren't teeth-wreckingly hard. 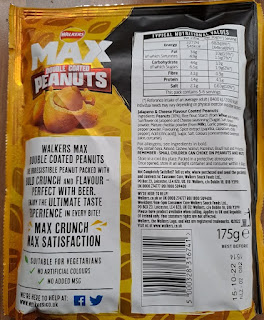 The bag is 175g and the recommended serving size is 30g. In case you're wondering, 30g looks like this. (Yes, I weighed it out.) 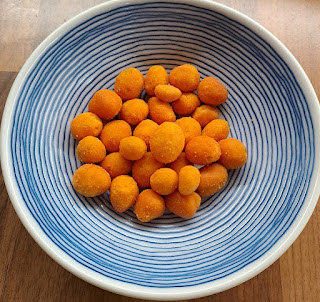 And here's a close up - where you can see the cheesy jalapeno flavour powder coating the snacks. 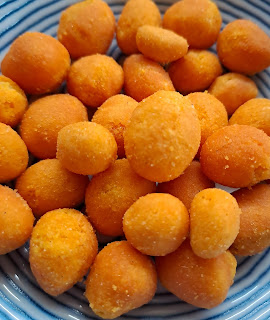 On the plus side Walkers did not skimp on the flavouring. The jalapeno has a real kick and leaves a pleasant afterburn tingle (if you like that sort of thing like I do). The serving size is just about the right amount, really, although it would be possible to pig the entire bag in one sitting while watching sport on TV. I know that would leave me feeling bloated and remorseful though, so I've been rationing them out.
Posted by Jongudmund at 16:24 No comments:

Live at the Roxy - The Tragically Hip live in 1991

I took delivery of a new CD a few days ago. It's a live album released by The Tragically Hip, of a concert recorded in 1991 - on the 3rd of May 1991, to be precise, at The Roxy in Los Angeles. (They aren't the first band to release a live album recorded at The Roxy, others include Bob Marley, Frank Zappa and Bruce Springsteen. It seems it's the place to record live albums. It was also where Guns'n'Roses played a lot of early gigs.) 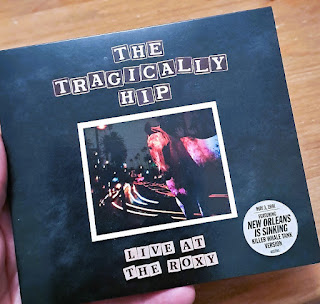 This album was released last year in a large box-set commemorating the 30 year anniversary of the Hip's third album Road Apples. The box set also included Saskadelphia, which was salvaged from some 30 year old session tapes. (I reviewed Saskadelphia last autumn.) For a while Live at the Roxy was only available in that box set, but it was released as a standalone album last month.

There was a sticker on the front of the CD digipak, saying it contains the "killer whale" version of the song New Orleans is Sinking. This refers to a mid-song ramble that the singer, Gord Downie, goes on, while the band play on. In it, Gord tells a story of being a maintenance guy in the killer whale tank of an aquarium who becomes the unlikely focus of a killer whale's romantic interest, and jealousy from the other whale in the tank. It includes a few lines where Gord pretends to speak 'whale' and makes suitable noises. Yes, it's as bizarre as you might be thinking.

The set list is a mix of songs off Road Apples, their second album Up to Here, and there are two songs from their debut eponymous 8 track mini-album. Intriguingly, there are three instances of Gord going off-script during songs and saying or singing lyrics that later appeared in songs on Fully Completely, which was released the following year.

Highway Girl includes a chunk of lyrics that ended up in Locked in a Trunk of a Car - about hiding a body where police helicopters won't spot it. There are two songs that include lines that later appear in At the Hundredth Meridian, with several lines repeated in the version of All Canadian Surf Club, which closes out the performance.

Fully Completely was the album that really defined The Tragically Hip, so much so they spent the next few albums trying to write songs that sounded different. The change in pace between Fully Completely and Day for Night, released in 1994, is remarkable. What I find interesting is the way that the band were clearly working with those lyrics well before Fully Completely was released.

As a final point, that may reveal my level of completist nerdery, I recognised the way Gord said "This is a song called 'Blow me'" to introduce the song Blow at High Dough. It sounded like a bonus track I'd listened to on a CD single. I went and checked my single of Little Bones, and, yep, the live version of Blow at High Dough was recorded live at The Roxy on 3rd May 1991.

I've always liked that live version, and now I have a copy of the whole concert!

Posted by Jongudmund at 09:33 No comments:

Discovering how people see me

A couple of week's ago we had a team day in work that included a session using the "Insights Discovery" colour toolkit. It's another one of those profiling tools that reaches various conclusions about personality based off a questionnaire. As part of the day we were given several cards each, which we could either keep, give to a colleague, or hand back to the people running the course.

The cards all had a characteristic on them and we were supposed to keep the ones we felt applied to us, and redistribute the others. We all started with 12 cards. I gave six away and was given another eight. This is the selection I ended up with. 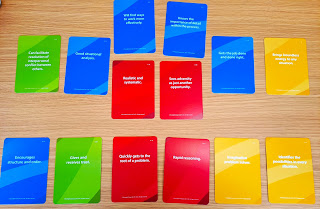 The six I kept were:
Some of them I strongly identified with, but I'll admit some of them I kept more because I would like to be like that.
The eight I was given reflect how my colleagues see me - or at least what they have seen so far. We have only been working together for a couple of months.
The cards my colleagues gave me were:
These are all fairly nice things to be told. I'm aware this sort of thing is not far off from those horoscopes that use vague compliments to make you feel positively about what they are telling you. We are almost always more likely to accept a compliment as a true statement about ourselves.
Later I got given a detailed profile of my personality based on the answers I had given to the quiz. Strangely, there wasn't much overlap between the cards and the profile. In fact, some of it was in direct contrast - apparently I am likely to delay making a decision until I am in full possession of all the facts rather than deploy rapid reasoning. But from the perspective of living in my head, once I have those facts I reach a conclusion quickly.
The only sour note of the whole exercise was that someone in my team handed the card saying 'Good sense of humour' back in to the facilitator. I felt mildly offended that they didn't give it to me. But maybe that's telling me something that I really ought to know...
Posted by Jongudmund at 18:09 No comments:

Sooner or later, you find your fashion label

I didn't really need a new hoodie, but when I found this at a branch of TK Maxx, I couldn't just leave it hanging on the rack. 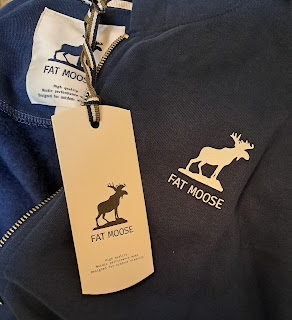 It's a very nice hoodie as a brand, I feel it suits me.
Posted by Jongudmund at 20:09 No comments: 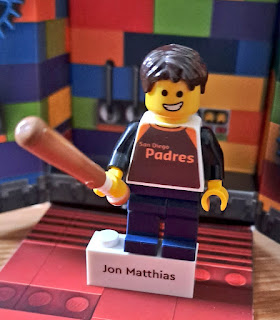 The Welsh for July is Gorffennaf - literally gorffen (end) and haf (summer), which given how it always tends to rain in August seems right. This July we had a three day heatwave that badly disrupted things and is possibly a sign of things to come unless humanity can collectively get its priorities in order and prevent the climate changing drastically.

The heatwave coincided with the Grangetown Zoo. We also had a visitor stay with us during the hottest few days. She was a good deal younger than us so Cathy and I took advantage of having a helpful young person around and bought new phones. My previous phone had served me well since I bought it in January 2016. If this phone lasts a similar length of time it should be good until 2028.

July was also a sporty month. I enjoyed watching the Euro 2022 football tournament, although I didn't get around to putting up the wall-chart for this one. It was an excellent tournament and a great example of how football is football, regardless which gender is playing it. The goal of the tournament was an audacious backheel that actually made me yelp with shock it was so unexpected.

I had decided not to go to any friendly matches in the run up to the new season. My first game of the season was therefore at Taff's Well who were playing Ynyshir Albions in the league cup. 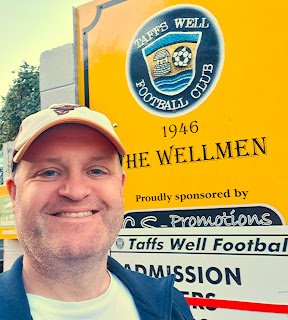 My first goal of the season was a toe-poke from three yards out after the Ynyshir goalie dropped the ball from a cross. I went with my friend Paul, who also accompanied me to Barry's first league game of the season, over in Ammanford on a Friday night. A long trip after work!

On the last Saturday in July, I went up to Cwmbach to watch Cwmbach Royal Stars play in the Welsh Cup. I went with my friends Sara and Leanne, and we took their twins, who were too intent on watching the game to pose for a selfie. 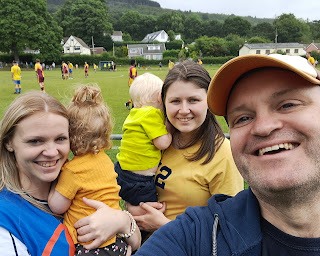 We also met up with Allan, who is the club photographer and committee member. He is a great source of local football knowledge. I met Allan through my previous job and had been promising to go up to watch  Cwmbach for ages, so I was glad to finally make good on my promise and see him again. 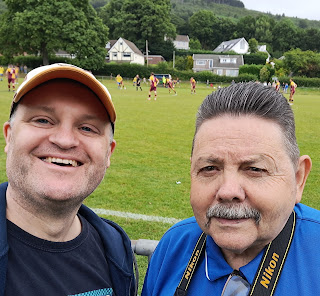 To cap off a great game, Leanne won the half time raffle! 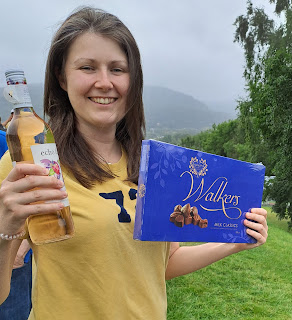 In addition to all the football, BT Sport were generous with their coverage of San Diego Padres games this month. I watched four and a half Padres games - against the Twins, Dodgers, Mariners and twice against the Giants - but I only saw them win once! I was beginning to think I was cursed until I finally saw them win a game at the fifth attempt of watching.

And I shouldn't forget the two Blood Bowl games I managed to fit into the month as well.

And finally - and what a way to finish off - I got to meet up with my buddy Connor for a Saturday as well. 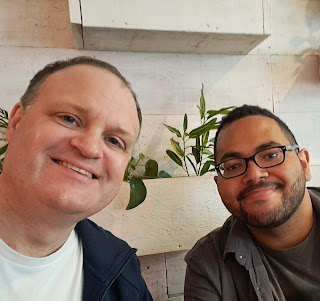 Connor brought me some belated birthday presents, including the epic Lego minifigure at the top of the post, which he had designed himself on the minifigure printer in the Lego Shop in Birmingham. He really timed his visit perfectly because both the Lego Shop and The Entertainer toy shop were giving away free Lego on the day he was in town. A double free Lego day doesn't come along very often. We made the most of it!

Posted by Jongudmund at 21:32 No comments: