1) It’s clever
The movie is well-animated with lots of little blink and you miss them jokes. There are also deeper jokes – the inanity of prime-time TV is spoofed by the hit TV show ‘Have you seen my pants?’ which revolves around a pantless (trouserless in the UK) guy asking his wife ‘Honey, have you seen my pants?’ repeatedly. As satire on sitcoms that rely on stupid catchphrases to get laughs, it’s spot-on.

2) It’s got superheroes (and other heroes)
Forget the hype of big-screen Batman v Superman. If you want to see DC superheroes together on the big screen, The Lego Movie got there first. The film royally rips the mick out of Batman’s ‘darkness’, while Green Lantern’s is mercilessly Green Lampooned!

3) It’s got an interesting point to make about creativity and order
The main plot of the Movie concerns evil President Business’s plan to set the world of Lego using the magical relic the ‘Kragle’. Once set, people won’t be able to move and people won’t be able to spoil his stuff. Opposing him are the ‘master builders’ who see the potential to create new things from the Lego buildings, vehicles and street furniture around them.

There is a conflict here between the oppressive rulers who want everyone to follow the instructions and conform – the hero Emmet actually reads out the ‘Instructions on how to fit in and be like everyone else’ at the start of the movie – and the freedom of the master builders to remake the world how they see fit. It’s an interesting exploration of the age-old tussle between conservatism and innovation, and that’s a good theme for a kid’s movie.

4) It’s been flamed by Fox “News”
Personally, I think anything that attracts the ire of Fox “News” is automatically A Good Thing. In this case one Fox “News” pundit lambasted The Lego Movie for being anti-capitalist. They said the same thing about The Muppets too. Their gripe is that business tycoons are being cast as villains, even though they create jobs and wealth.

Of course, Fox “News” is going to side with the mega-rich and look out for the interests of tycoons rather than ordinary folks. What Fox “News” don’t realise is that there is a reason why tycoons make such effective villains – we have seen enough terrible anti-social behaviour from the feral rich to believe they would destroy the world (or at least knock down valuable cultural heritage like the Muppet Theatre).

And it’s telling that in The Lego Movie, President Business would rather employ an army of robots than real people, much like the downsize kings of the business world, in fact.

5) It’s full of cult Lego references
Cathy almost jumped out of her seat when there was a glimpse of Fabuland at one point. One of the best characters is Benny the blue 80s spaceman, who is obsessed with building spaceships. (At one point one character tells him to ‘Get your retro space pieces away from me.) There are numerous cool Lego characters from the mini-figures range popping up in crowd scenes.

If you love Lego, then it’s hard not to love this movie. If you don’t love Lego, I think you will like it anyway. It’s well worth a watch.

Posted by Jongudmund at 20:41 No comments:

The dark heart of Disney’s The Lone Ranger

This post contains spoilers...
I wasn't prepared for The Lone Ranger. The trailers made it look like an enjoyable romp through the old West, with derring do, gunfights, wisecracks, chases along train carriages and so on. It had all that, it’s true, plus Johnny Depp on brilliant form. But there was an unexpected darkness at the heart of the film. 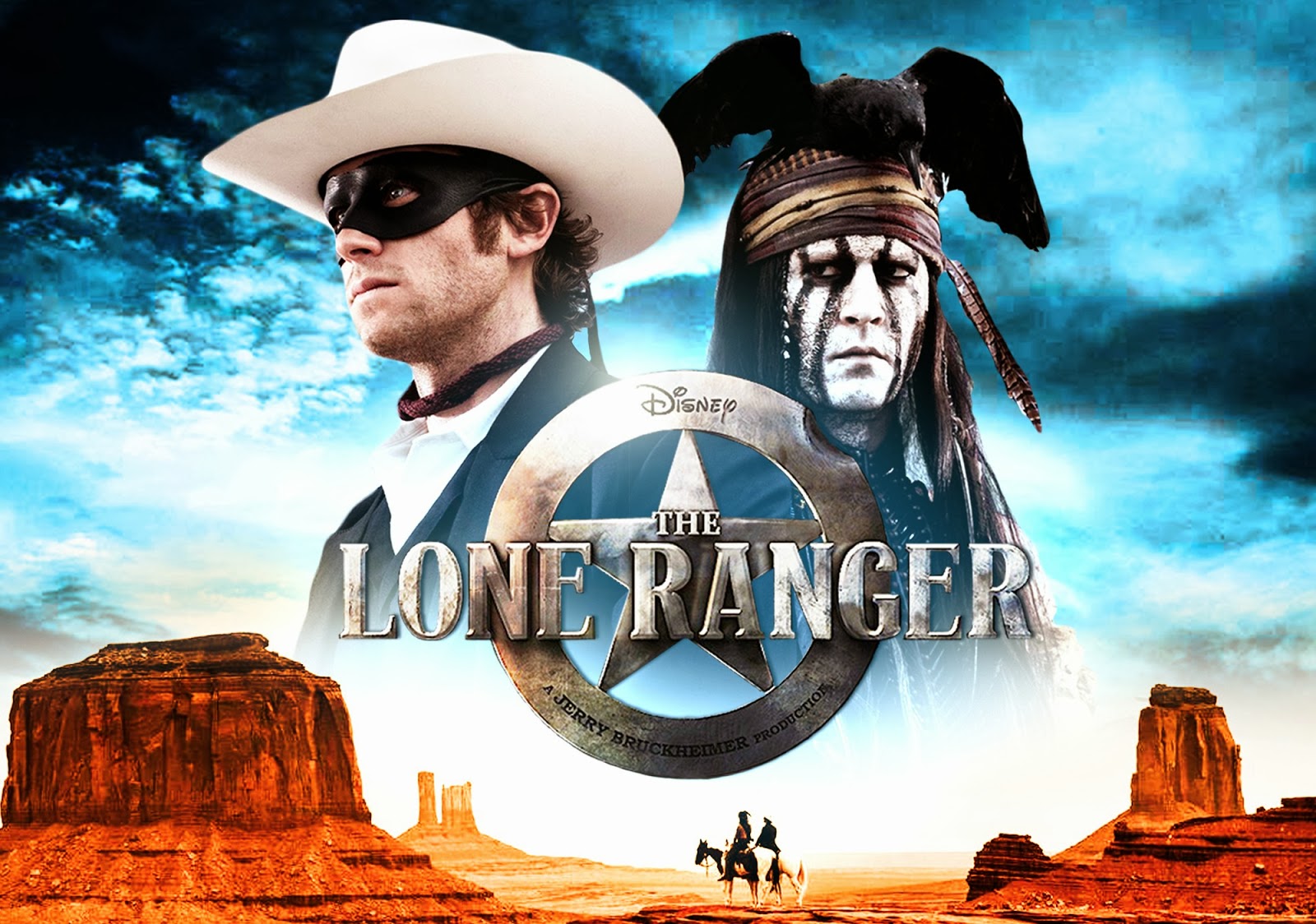 I wasn't expecting a scene of cannibalistic murder committed by an outlaw. Or the wholesale slaughter of Comanche warriors under the rattling clacks of Gatling guns. These were interspersed with moments of levity that felt inappropriate.

As the Indians are massacred by machine guns, Tonto and the Lone Ranger are stuck on a pump truck being gained on by a train – a scene that is comic in itself, especially for the way the characters interact. However, juxtaposed as it was with the scenes of one-sided warfare, it felt wrong to be laughing at the main characters’ predicament.

Similarly the murderous villainy of the leader of the outlaw gang, Butch Cavendish. In the past it would only be necessary for him to line his pistol with the forehead of the mortally wounded Texas Ranger that he kills, and pull the trigger. The report of the pistol would be enough, with maybe a view of the corpse to establish that he is definitely dead.

Considering this was released by Disney, with toys in the Disney store (and a large Lego tie-in range as well), to have Cavendish finish off his Ranger victim by cutting out his heart and eating it was fairly horrific. Admittedly most of this happens off-screen, but he is handed a napkin by one of his goons afterwards to wipe away the blood from his mouth.

I’m not necessarily against extreme violence. I watched Dredd and the two Kill Bill films and despite the violence being brutal, appreciated the merit of including it. There was no merit to including this scene in The Lone Ranger. It didn't add to the drama. Seeing his brother executed at close range by a bullet to the head would have been enough to make Dan Reid seek understandable vengeance as The Lone Ranger.

Equally, it messed up the rest of the story, as we connect the dots between the outlaw leader and the other villains of the piece. Despite being the kind of guy who eats a lawman’s heart, Cavendish is quickly incorporated into the entourage of a bigger enemy, and from then on seems a lot less menacing.

Outside the law he is wild and savage, but it’s hard to take him seriously when he is supposed to be part of a bigger plan. It just doesn't work. He is too far gone down the path of brutality to be relied on by an intelligent criminal. And that’s a shame, because the link between Cavendish and his partners and Tonto pulls the film together well.

So, what is left in the film? The chase sequence at the end is brilliantly ludicrous and convoluted and highly enjoyable. Unfortunately, this only served to highlight how darkly drawn the preceding almost two hours had been. Helena Bonham Carter is woefully under-used but is pure comic joy when she is on-screen. The landscapes are gorgeous, shot mainly in Utah among the sandstone mesas and canyons that I fell in love with when I went there. (In fact, point worth noting, this wasn't filmed in Texas at all!)

The film also asks plenty of interesting questions, particularly in its portrayal of the Cavalry. The use of Government military strength to back up the expansionist plans of industry against the natural inhabitants of the land has parallels with the oil-grabs in Iraq following the US-led invasion. The ethical questions surrounding the decimation of the indigenous peoples by 'civilisation' aren't answered here, but they are at least asked.

The opening device and introduction of Tonto as one of history’s most unreliable narrators is a nice touch as well. The opening scene is set in 1933 when these events have already passed into history, folklore and legend, and that’s clever because it legitimises these events as having a factual basis.

The Lone Ranger is considered a bit of a flop by Disney’s standards. It’s not hard to see why. It’s clearly unsuitable for children. It’s long – with a running time of 143 minutes. And it only really comes alive with the chase sequence at the end. Bits of it were very enjoyable, but it was too bleak in places and never really answered its own moral questions.

Posted by Jongudmund at 21:29 No comments: