With the World Cup over, I no longer have an excuse for not writing my season review of 2017-18.

2017-18 was a record high season for me in the 'modern era', which for me is any time after about 1996. I went to 30 football matches, the second most I've been to in a season ever and the highest number since 1993-94. Along the way I saw the champions elect of England, I went to Wembley twice, and I saw Wales blow their best chance of making it to a World Cup since that time they lost a qualifying play off to a bunch of juiced up Russians.

As per previous seasons, here are the overall stats:
Season: 2017-18
Total games: 30
Most goals in a game: 8
Fewest goals in a game: 0
Total goals seen: 81
Number of football grounds visited: 7 (2 of which I’d never visited before)

In previous years I gave a little pen picture of each game, but that would be exhausting for 30 games. Instead, I'm just going to do a rough overview and then give out some awards.

I went to thirty games for three main reasons.

1) Shrewsbury Town had their best season in a generation, spending a lot of the season in a promotion place before slipping to third in the final weeks of the season. They went to Wembley twice - in the Checkatrade Trophy final and in the play-off final. 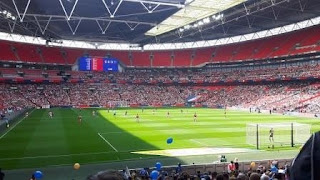 They also had a sell-out televised third round FA Cup game, which included Joe Hart's return to his hometown club. I saw them win away at Bristol Rovers, I saw them beat Walsall for the first time in many encounters, and I even saw them win on my birthday, against Oxford United.

2) Football is a people activity. My friend Sara is a season-ticket holder at Cardiff City, and so are most of her family. But sometimes they can't all go to games and they invite me along to fill a vacant seat. I saw five games with them this season. My mate Steve sorted me a ticket in the away end of Cardiff City Stadium to see QPR, and we also went to a couple of other more random games. And my mate Ben came with me to a couple of matches, and I went to see him play in the Welsh League a couple of times. Until he decided to swap sunny South Wales for some place called Los Angeles, California. What was he thinking?

3) Barry Town are back in the Welsh Premier League. I decided to go along to one of their first games, and ended up there five times over the course of the season. It's a nice atmosphere, it's affordable, and the games usually had a decent number of goals. There's a hard core of fans who sing throughout and I really like that. And you get unexpected stuff like this. Best team: Without a doubt, Manchester City. I have never seen football played like that.
Best moment: Seeing Shrewsbury win with a late, late, goal at Bristol Rovers, courtesy of an unpredictable bit of skill from Alex Rodman. It was the first time Shrewsbury had won at Bristol Rovers since the 1960s. I'd driven over there on my own. The weather was crap. The stadium is crap. The game wasn't great. And then there was THIS!
Second best moment: Ben Woodburn. The dream was still alive! Russia, here we come...
Biggest disappointment: After two trips in a season, Shrewsbury have now been 5 times to Wembley. I have been 5 times to watch them. I have seen them lose 5 times. That's all you need to know about Shrewsbury's season, really. Ultimately, after being surprise candidates for promotion, they ended up with nothing. Here's a suitably dismal photo. 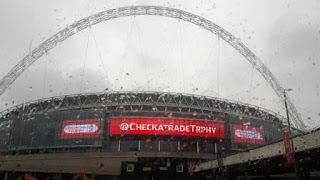 Most frustrating game: Shrewsbury's 0-0 draw against West Ham in the FA Cup. Live on TV and West Ham were poor. Shrewsbury's Stefan Payne missed the one chance that fell to him that would have won the game. This was my only 0-0 of the season. But I did see Alan Shearer and Ian Wright in their temporary TV studio. Later they got their make up done. 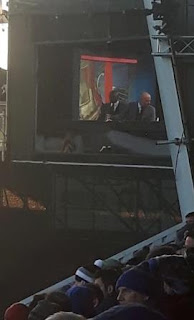 Strangest goal: Kevin de Bruyne against Cardiff City in the FA Cup. I saw this from behind the goal and he made an absolute idiot out of the whole defence.
Most memorable miss: Neil Maupay for Brentford against Cardiff. I was again stood behind the goal and I have absolutely no idea how he missed. Cardiff then almost immediately went up the other end and scored a second goal to seal their win.
Most touching moment: It's unusual for a visiting player to get a round of applause from the home fans when his name is read out. But Joe Hart did when his name was read out over the tannoy when West Ham came to the New Meadow. Then the rest of his team-mates got booed. As you'd expect.
Strangest scoreline: STM Sports 4 v 4 AFC Lwydcoed. I went to see my mate Ben play for STM Sports in the Welsh League Division 2. he got subbed off when STM were winning and we watched his team score one and concede two goals in the last 10 minutes of the game. I took this photo of him in action, along with a STM Canine Superfan who had made his owner bring him along. 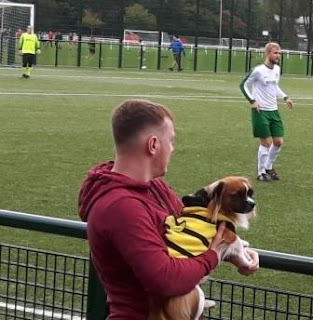 Most unusual match up: Wales 'C' v England 'C' at Jenner Park, down in Barry. I have now seen Wales, Wales B, Wales C and Wales Under-21s play. Read a full review here.
Best crowd: Has to be the Barry Town fans. They always make me laugh.
Unlikely moment of fame: I went with my friend Steve to see Cardiff Met play in a post-season play-off against Barry Town. The game was live on Sgorio. And so were we at one point! 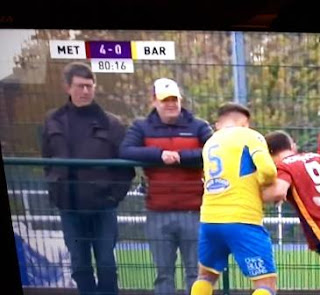 And finally, the most stupid thing seen at a football match: This sign by the concession stands in Wembley! 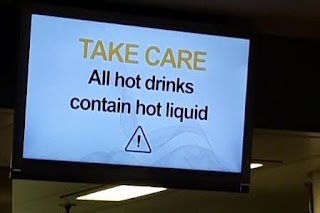 And that's it. Roll on next season.

Posted by Jongudmund at 19:35 No comments: