Back in 2014 Guardians of the Galaxy was an unexpected hit after being widely tipped to be the first Marvel movie to bomb. Cathy and I both loved it (it was my film of the year) and we have subsequently got into GotG in a big way. Toys, books, comics, and playing the Awesome Mix soundtrack album quite a bit. I've blogged about how I found one storyline from the comics particularly inspiring. There was also a possible religious-themed social commentary in the first film - it's no accident the villain is a religious fanatic.

A few weeks ago Guardians of the Galaxy Vol.2 came out. I was a bit worried whether it would be anywhere near as good as the first one. But I also had high hopes. I wasn't disappointed. The film was brilliant. But what I got was something much deeper than I expected. It is probably the movie that has asked the most interesting theological questions for a long time. Spoilers follow, so don't read on if you don't want any.

The first film ends on a slight cliff-hanger. Peter Quill (Star-Lord) is told he is half human, and half something else. Yondu tells a subordinate that he's glad he didn't deliver Quill to his father. This film is about Star-Lord and his dad.

His dad turns out to be Ego, the embodiment of the consciousness of a living planet housing the physical form of a Celestial, an incredibly powerful ancient life-form. The incarnated version looks just like Kurt Russell. Ego turns up to usefully save the Guardians from an attacking fleet of spacecraft and then proceeds to invite some of the team to come and visit his planet. When he explains who or what he is, he is asked if he is a god, and Ego says 'Yes, but with a small g.'

Star-Lord is told he is most likely immortal, what with being the son of a god with a small g. And then Ego reveals his intentions. His billions of years of consciousness have convinced him that other life forms are mundane and disappointing and he intends to wipe them out, transforming the matter of the universe into his own self. Presumably to become a God with a BIG G.

However to do this, Ego needed more power - the power of two Celestials - and had therefore roamed the galaxy as his Kurt Russell incarnated self romancing all kinds of alien races to try and procreate another being with Celestial power. One of the beings he procreated with was Meredith Quill, Star-Lord's mother, and Star-Lord is the only one of Ego's children to contain the necessary Celestial essence. (The rest of his offspring are now a mound of skeletons in a cave.)

Ego offers Star-Lord the opportunity to join him in transforming the universe into God but first Star-Lord has a question about his mother. Did Ego really love her? Yes, Ego replied, but his mission to change the universe was more important. Then Ego drops a bombshell, saying he gave Meredith Quill the brain tumour that killed her. Star-Lord doesn't ask any more questions, he just draws his guns and begins blasting away at the Kurt Russell-shaped embodiment of Ego. Star-Lord and the Guardians then fight Ego, first to escape, and then to kill him.

As I said this is the most theologically interesting movie plot I've seen in a while. You could almost say it's an anti-theistic plot, in that it shows attacking a god (with a small g) as an heroic act. The Guardians get to save the galaxy for a second time. It's rare that a movie depicts deicide - the act of killing a god. Of course this isn't the 'god' of any established religion, this is a 'god' in a fictional setting, but it still opens up those questions.

Like many people who have been involved in a church a long time, I have prayed for people to be healed, who then haven't been healed. Just over 10 years ago a brilliant Christian man I knew died of cancer at the age of 32, a few months after diagnosis. This was despite regular prayer meetings, including at the Christian charity I worked at, asking for him to be healed. My experience is not unique. Prayers for healing often go unanswered.

I don't think it's an accidental music choice that when the Guardians arrive on Ego's planet, the song playing is George Harrison's 'My Sweet Lord' with it's refrain "I really want to see you, Lord." This is something prayed in earnest by many believers when praying for God to intervene in a situation.

If God doesn't intervene, Christians console themselves with reassuring statements that God's ways are higher, or there must be a plan behind it all, or, the line I hate most, that God takes the best ones first. (What does it say about those who don't die young?) Sometimes it's said that by dying, people are "really healed" as in made perfect in the afterlife. But that wasn't what was prayed for. When I have prayed for people I wanted them restored to full health in this life. And then sometimes people say that God will have all the answers when we see him after we die. That feels a bit 'too little too late' to me.

Guardians of the Galaxy Vol.2 actually gives its main hero the opportunity to ask those questions without having to die first. If Ego is so powerful why couldn't he save Star-Lord's mother? The answer is so callous and cruel - not only did Ego not prevent it, he actively caused it - that Star-Lord forgets all about the promise of his own immortality and proceeds to attack the being who fathered him.

If we did get answers to our questions and we didn't like them what would our reaction be? Would we suddenly turn on God like Star-Lord? That's a big question. All the assumptions are that when we get answers we will be satisfied by them, but what if we are not?

I discussed this with Paul Hammond, presenter of the morning show on UCB Radio last week and Paul asked whether comic book movies are the right place for these kind of theological topics to be explored. It was a question that surprised me a bit, but as I thought about it I realised that they are possibly the only movies left where they can be asked. There is a layer of cynicism running through most 'realistic' cinema these days so perhaps to discuss questions of belief you first have to get the audience to suspend disbelief. If you've accepted spaceships and pink slimy monsters and genetic experiments that look like talking raccoons, it's not a stretch to consider interacting with a divine being - even if it only a god with a small g.

Posted by Jongudmund at 23:38 No comments:

Way back at the end of 2011 I wrote a post about the provenance of quotes, with three examples of quotes and stories that I felt were not authentic. A couple of months later I proved one of the stories - about the violinist Itzhak Perlman - was totally untrue, because I emailed his agent and got a reply debunking the myth.

One of the quotes was attributed to Aneurin Bevan. I could not find a source for it and the people who quoted it couldn't give me a source either. Then back in January 2015 I had the bizarre experience when I asked a Tweeter if they knew the source of the quote and they linked me back to my blog post questioning whether the quote was genuine. When I pointed that out they didn't bother to reply.

On and off I've noticed the quote still appearing on Twitter, often in this format: 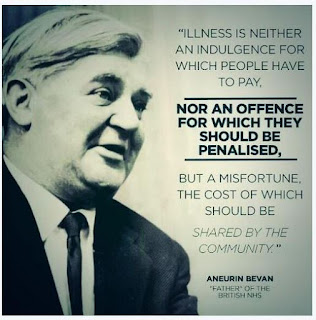 And so to a few days ago when I got a mention on Twitter from a chap called Alex Marklew.  I had not heard of Alex before but he had written a piece on Medium.com about the same quote. In his tweet he acknowledged my "initial digging" around the quote and he linked to the original blog post and quoted from it.

Alex definitely went further than I did, fruitlessly scouring the biographies that I'd been pointed towards but hadn't had time to read. He also seems to have gone deeper into Hansard than I ever did. And, most excitingly, he has found the quote, except it was not said by Aneurin Bevan. It was a summary of Bevan's position by a British sociologist called Thomas Humphrey Marshall, who wrote 'Social Policy in the Twentieth Century' (published in 1967). Alex has the exact quote in its context in his article. Then in 1978, Marshall's line was quoted in a paper called 'Medicine, Health, and Justice: The Problem of Priorities', with the quote attributed to Bevan. Alex refers to this paper as 'Patient Zero' - the source of the quote as a false 'Bevanism'.

I think Alex Marklew has solved this mystery, which I never thought would be, and I'm grateful. It was one thing on my list of things to get round to one day and now I can cross it off without having to lift a finger.

The question now is, does it matter who said it? I mean, yes, in one sense it does because misattributed quotes are basically lies given false authority based on who allegedly uttered them. But the question is do we still agree with the message, regardless who says it? I do. I think this quote from Thomas Humphrey Marshall captures the essence of why healthcare should be freely available to everyone. I'm not too bothered that it was said by someone writing about Bevan and the NHS and not by the "Father" of the NHS himself (as seen in the meme photo above). But I'm glad I now know who we should credit with saying it.