And that's Jonny Danger, for the win

Guess who's number one! *Go on, guess baby!) Oh, yeah, that's right - Feel the Force from Fair and Bare. Can you feel it! 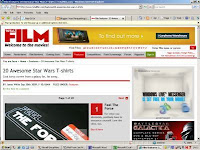 Check out the complete list here.
I guess this just goes to prove that "I raaaaaaaaaaaaaaaaaaawk!"
Posted by Jongudmund at 13:52 1 comment:

Email ThisBlogThis!Share to TwitterShare to FacebookShare to Pinterest
Labels: Fair and Bare, my stuff elsewhere on the net, Star Wars, T-shirt

Palindrome of the week

Got this one from the Adopt-a-word email newsletter:

The longest palindrome in the world is Finnish. It's saippuakivikauppias and it means soap-stone vendor.

(And, yes I have an adopted word - actually adopted for me by Cathy. I wrote about it here.)
Posted by Jongudmund at 07:27 No comments:

Email ThisBlogThis!Share to TwitterShare to FacebookShare to Pinterest
Labels: Finland, palindrome, word of the week

John Lewis opens in Cardiff today and is being hailed as the saviour of the city centre by a toadying BBC and lickspittle politicians. (I suspect they've just cut and paste this news story from some John Lewis press release. It's hardly critical reportage.)

When IKEA opened we had a similar excitement. "Oooh, a new shop, we must go and wonder round like petit bourgois drones. Ooh, we can now buy stuff that other people in other parts of the country can buy and be as well-dressed/chic/styling as them." Or desperately unoriginal. It's the same thing.

Nobody has talked about whether the city can cope with an increase in shoppers (it can't) or what effect this will have on being able to park anywhere near the centre (good luck with that) or even the economic effects on smaller non-chain shops that actually have a soul (sod them, they're not multi-million pound companies).

Until those considerations start getting mentioned in the sycophantic press, excuse me for not getting excited about an overpriced pseudoposh unnecessary department store opening. I'm not a wannabe yuppie or social climber so I don't think I'll find much in there that interests me. Just a hunch.
Posted by Jongudmund at 07:50 2 comments:

My mate Matt tipped me onto a hilarious blog containing real-life stories of the morons who are politely called customers. Check it out: Not Always Right

I've submitted my favourite ever story from when I worked at the cinema. I was on the concessions stand and a girl came up and said...

She then burst into embarrassed giggles. I looked down at my waist, shook my head sadly, and said...

"I think you're going to be disappointed..."
Posted by Jongudmund at 07:49 No comments:

This word pair is actually anglicised Japanese, that can also be spelt/said Betsu Bara. Interestingly, Japanese doesn't have an 'R' or an 'L' so either can be used when it's anglicised, which is plobabry why steleotypes of Japanese people speaking Engrish mix them up.

Anyway Betsu Bala means 'additional stomach'. Apparently only women have them and it explains why women might not be able to finish their main course, but will have enough room for dessert. You'd use it as in the following:

"My friend Terri who has just come back from Japan couldn't finish her roast potatoes at the carvery the other night, but fortunately, while in Japan, she developed a Betsu Bala, which meant she had enough room to order the treacle sponge with the bottomless jug of custard. The pig."
Posted by Jongudmund at 23:01 5 comments:

Er, I think you mean "generic"

So the other day we were out for dinner and for some reason my Dad was explaining how he had proper Peugeot branded car mats and mud flaps, "not like those unisex ones you buy in Halfords."

It's all a conspiracy...except it's not

Eight years on from 9/11 and how time has flown. What’s interesting for me though is how many conspiracy theories have sprung up in quite a short time.

Just to set out where I’m coming from – I don’t believe any of the conspiracy theories for two reasons. 1) As I see it, a jet plane crashing into a skyscraper is likely to destroy it without the need for thermite charges or the CIA. 2) I don’t believe large groups of people can keep secrets very well.

Just about every conspiracy theory I have ever seen has that circular reasoning at the heart of it.

Ultimately conspiracy theories are just people looking for a ‘supernatural’ explanation for something quite mundane. We don’t want to believe that a handful of people with only rudimentary flight experience could cause such carnage, so we invent a conspiracy to make us feel safer – this must have been a huge operation with government complicity and decades of planning and so on. That’s far better than the thought that this was a random act of terror caused by a few people, which could be easily replicated.

As a race we have often created ‘supernatural’ explanations for random, frightening events that we have no control over. Whether it’s sacrificing virgins to appease the volcano gods, or throwing gold coins into rivers to ask the river spirits for safe crossing, it comes down to the same thing. We want to ‘explain’ the randomness as somehow caused by something, because that makes it less scary. We can perhaps do something to propitiate the gods (or the government) so that the danger goes away.

But the thing is, just wishing the world was a safer place doesn’t make it so.
Posted by Jongudmund at 07:54 No comments:

The parable of the 100 Euro Note

A Lesson in Economics, sent to me by a friend.

It is the month of August, on the shores of the Black Sea. It is raining, and the little town looks totally deserted. It is tough times, everybody is in debt, and everybody lives on credit.

Suddenly, a rich tourist comes to town. He enters the only hotel, lays a 100 Euro note on the reception counter, and goes to inspect the rooms upstairs in order to choose one.

The hotel proprietor takes the 100 Euro note and runs to pay his debt to the butcher.

The butcher takes the 100 Euro note, and runs to pay his debt to the pig farmer.

The pig farmer takes the 100 Euro note, and runs to pay his debt to the supplier of pig-feed and tractor fuel.

The supplier of feed and fuel takes the 100 Euro note and runs to pay his debt to the town prostitute who, in these hard times, gave her "services" on credit.

The prostitute runs to the hotel, and gives the 100 Euro note to the hotel proprietor to pay her debt for the rooms that she rented when she brought her clients there.

The hotel proprietor then lays the 100 Euro note back on the counter so that the rich tourist will not suspect anything.

At that moment, the tourist comes down after inspecting the rooms, and takes his 100 Euro note, after saying that he did not like any of the rooms, and leaves town.

No one earned anything. However, the whole town is now without debt, and looks to the future with a lot of optimism...
Posted by Jongudmund at 07:42 1 comment:

Check out these skillz

Posted by Jongudmund at 07:54 No comments:

The Daily Mirror are currently running a promotion giving away free Star Wars Lego. Saturday's model was a Stormtrooper on a speeder bike. I thought 'I want one of those.'

I went to the WH Smiths in town to buy a paper and pick up the model, but they had run out. Then I had a brainwave and went to the Smiths store in the Central Station. They had oodles of them. The girl on the till asked me if I had kids and if I wanted more then one. I couldn't lie and say I had kids, but I did say 'Well, if you're giving them away...' So she gave me three.
And here they are flying in formation with an Imperial dropship model I got given last Christmas. Oh, yeah, the Stormtroopers are gonna get you! 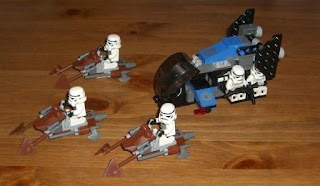 5 things that are good about not getting a new job

Yesterday I had a job interview. Sadly I didn't get the job. But, as Cathy always says, I have to count my blessings. Here are five of them.

1) The experience. For me it was the first time I've ever been personally prayed for by a bishop - and the first time I'd ever been to a job interview that opened with a prayer. It was at Lambeth Palace in London, which I had never been too before and was simply something else. The room I did my prep exercise in felt like I was typing in a drawing room in a stately home. Not many people in the world have been able to ring the doorbell at Lambeth Palace and say 'Hi, I'm here for the interview'. Plus afterwards I walked over the Westminster Bridge and wandered round Parliament Square and Westminister Abbey, which I don't get to do every day.

2) The affirmation. Doing the prep, writing the CV, reading the references people wrote for me, just getting on the shortlist for a high profile job has encouraged me and affirmed me. When the day job feels like a grind and you keep having to sort out bitty, petty things you can believe that your skillz are petty too. I guess when someone sees potential in you, then you start to believe in yourself. My presentation was really well recieved and I held my own. It came down to secondary skills, and the Bishop's voice was full of real regret that they had had to make such a hard choice between "exceptional" candidates.

3) Feeling the love. I had a lot of people rooting for me. Some were praying, some were thinking positive thoughts, and some had their fingers crossed. But knowing so many people were on my side really gave me a confidence boost. And since I heard I didn't get it, two people have said that they are selfishly slightly glad I'm not going anywhere, which in some ways is really nice.

4) I don't have the upheaval, but I haven't settled either. I do enjoy my job (sometimes) , but there's always a danger you get in your comfort zone. At least I won't have the nagging fear that I'm settling for the easy option. I gave it a go.

5) I can finish the unfinished business. There are a few proper writing projects at work I would like to continue through to completion. Having to leave good projects mid-task would have been a bit annoying. So now I can get my head down and crack on with them.

So, yes, I'm still a little disappointed. But there are upsides to the downside.
Posted by Jongudmund at 21:10 1 comment:

I went with Matt to his first ice hockey match last Saturday, a pre-season friendly between the Devils and Coventry Blaze. As it was a warm-up game (no pun intended) they didn't go into overtime, so the game ended at 2-2 - an unusual scoreline for a hockey game.

Given that the Blaze were in the title hunt last year and are considered one of the 'big 4', Cardiff didn't do too badly. They more than held their own, scored while they had a man in the sin bin and rode their luck at times. Plus there was fighting, which Matt as pleased about.

I'm thinking of getting into hockey, and as Matt enjoyed it enough to come back too, we might make a habit of it. We both bought souvenir pucks anyway, because, you know, you can't have enough souvenir tat. And now we can make puck jokes like 'What the puck is that?'.
Posted by Jongudmund at 23:08 1 comment: