This weekend there's bucketloads to do - The Big Cheese in Caerphilly, some event down the Bay with fireworks, and probably heaps more. But the thing is all these free festivals are all very well, but if you go you end up being tempted to spend money and well, money is tight for me at present.

Partly that's because our household has grown to three as we do the good neighbour thing and provide a needy friend with a roof over her head. Partly it's because Cathy is too ill to work. Partly it's because we've spent a bit of money on big things (like our lovely new mattress) and also got hit by a load of bills when we came back from holiday.

But mainly it's because we haven't really been keeping track of what we're spending and it's easy to get into the habit of a few quid here, a few quid there. So, I'm not going out today because the more money I can save, the quicker I'll be able to save up for the laptop I think I need. Plus I can get on with the freelance writing I'm meant to be doing which will bring in some much needed extra cash. (Although, inspiration is lacking at the moment, obviously or I wouldn't be blogging.)

I hate worrying about money, although this week everyone at work got a cost of living pay rise. I'm going to get an extra £6 a month after tax. Woo hoo. Must. Resist. Urge. To. Spend. It. All. At. Once.
Posted by Jongudmund at 16:11 1 comment:

The reason we were talking about Crusader camps, was because a group of people from Urban Saints (who used to be called Crusaders) were being shown around our building. Their guide, Brian, tried to prompt conversation and so asked us if we had any memories of Crusaders.

"That time we sacked Jerusalem was amazing," I said.

Now, on reflection that joke could have gone either way. Fortunately they thought it was funny.
Posted by Jongudmund at 09:39 1 comment:

Talking about Crusader youth camps, Ruth followed up her comment about becoming 'the' fat designer by asking another colleague whether she ever asked people if she could borrow a padded bra.

In breaktime today, we had cake to celebrate the fact that a colleague didn't die in a horrific road accident that wrote off his car last week. (Strange, I know.)

Matt, one of our two graphic designers, refused to have a piece of cake, as he's dieting. This caused his cake-eating compatriot Ruth some consternation. "Oh, no," she said, "at this rate I'm going to be the fat graphic designer."

Why are some Christians a-holes?

I’m not quite sure when I put things on my blog where they’re going to go, but my buddy Justin’s response to my criticism of ‘gay for Jesus’ worship songs is very funny. I’d be tempted to try and write my own ‘manly’ worship songs too, but I’m not sure I could top his.

Also, another buddy, Jo, put me on to this article about how homoerotic worship songs are theologically unsound. It’s a great article and worth reading, but also carry on reading through the comments and you’ll understand the title of this blog post. There are some real haters out there and many of them seem to be ‘hating for Jesus’.

I really don’t understand that mentality. You disagree with someone, so say you disagree. ‘I think you’re wrong and here’s why’ is all fair enough. But to verbally attack someone for not loving Jesus the way you think Jesus should be loved (even if that means 'unthinkable' manlove) is bizarre.

It’s tempting to dismiss this kind of flaming as an American thing, but it’s not exclusively American. A friend of mine was brought nearly to tears by an unjust flaming he received in a Welsh Evangelical magazine (published by) a couple of years ago. And with haters who are also Christian, there’s no right of reply, and no editorial balance. Heathens are fair game, and if you don’t agree with my narrow blinkered view of Christianity then you’re obviously a heathen.

Maybe it’s a church culture thing. A church that preaches a gospel of hate will rear disciples who hate, and encourage them to spew forth their hate and condemnation on a hateful world. Stand up to those bullies and suddenly you’re not a “real” Christian, or even worse, you’re discriminating against Christians with your anti-Christian views.

One of the most interesting bits of the God Delusion was the section when Richard Dawkins reproduced all the hate mail he had received from Christians. Twisted gloating letters full of joy that one day Dawkins would wake up in hell. Those letters made me ashamed of my fellow Christians and want to stick up for Dawkins. Okay, I think he’s wrong, but that doesn’t mean he should be treated with contempt or subjected to hate mail. Especially not in the name of Jesus Christ.

So, my question is, why do some Christians behave like complete arseholes? Of course, you might ask that of me, given that I’ve just slagged off people who slag off people (and used the word arseholes to boot). But I don’t think calling some Christians out on their bad behaviour is going to drag the name of Jesus through the mud as much as letting people carry on hating in his name.

Or have I missed something?
Posted by Jongudmund at 07:16 2 comments:

Possibly one of my favourite freelance theology questions ever

"If Jesus sits at the Father’s right hand in heaven, where does the Holy Spirit sit?"

Incidentally, if you aren't part of the freelance theology Facebook group yet - how about joining? Better still, invite all your friends to join too. That would be fab.
Posted by Jongudmund at 07:32 No comments:

Email ThisBlogThis!Share to TwitterShare to FacebookShare to Pinterest
Labels: Facebook, freelance theology, my stuff elsewhere on the net, shameless plugging

For those about to... 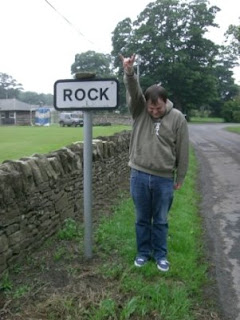 We salute you!
Posted by Jongudmund at 07:42 No comments:

This is that song I was talking about

A while back I mentioned Christian worship songs that make men sound gay for Jesus. I couldn't find the lyrics to the one I meant. Well, now I have and here they are...

By your side I would stay
In your arms I would lay
Jesus, lover of my soul
Nothing from you I would with-hold

Lord I love you and adore you
What more can I say?
You cause my love to grow stronger
Every passing day

Hmm, Ecce Homo indeed. Astonishingly this was written by a husband and wife team. Strange, yet true.
Posted by Jongudmund at 21:32 No comments:

When I lost my head at Alnwick Castle... 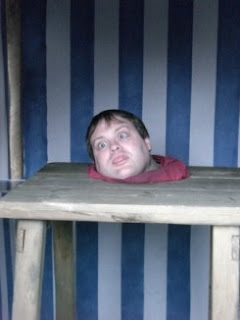 Posted by Jongudmund at 07:32 No comments:

Yeah, yeah, I hung with Mark Thomas. (And he loved my t-shirt!) 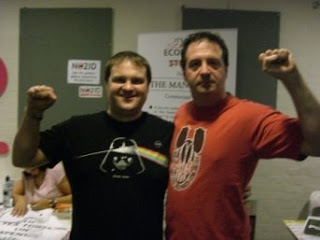 At book group the other night this is how I reviewed a book I've recently read.

"Not wanting to sound like a paedophile - and I realise that's a terrible way to start a sentence - but I did kind of understand what [the author] was driving at..."

Can you guess the book?
Posted by Jongudmund at 13:20 2 comments:

Email ThisBlogThis!Share to TwitterShare to FacebookShare to Pinterest
Labels: book-group 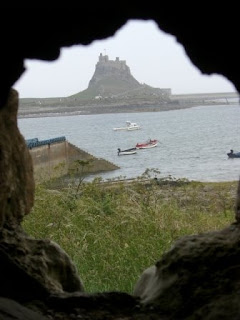 Posted by Jongudmund at 13:18 No comments: 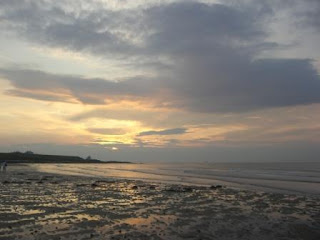