Just after Christmas Cathy found some reduced Star Wars Lego and bought me a set called 'Ewok Attack'. It's been sat on the side for a while, but I finally found the time to build it. 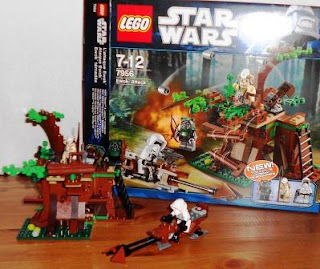 Having acquired plenty of Star Wars Lego in my time, I already owned a Star Wars Lego set called 'Ewok Attack'. and it seemed natural to put the two together. 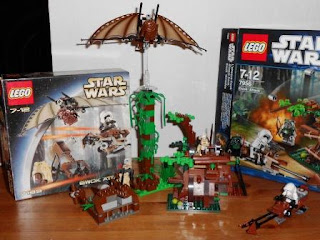 I like the hang-glider. The bizarre looking tree thing is a mishmash of Lego plant elements from other sets.

But the fight now looked a bit one-sided. And we all know the Emperor sent a "legion" of his "best troops" to Endor. So here they are. 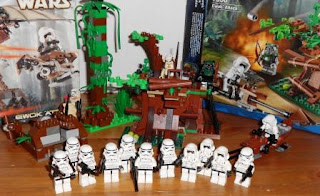 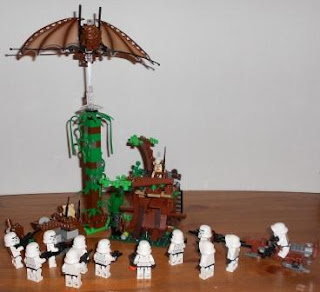 I've actually had sets with a number of Imperial Speeder Bikes in. The designs have changed and become more refined in the past ten years. 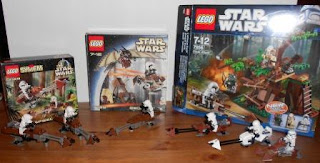 This picture includes a winter-camo speeder bike from a Hoth set and also a micro-speeder from a Star Wars giveaway. Lined up you can see how the design has evolved - the first speder bike was quite a blocky affair. Now, with several new elements it actually looks like a speeder-bike. 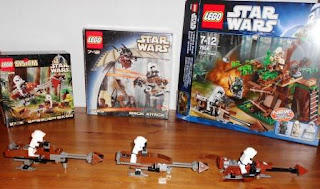 Eventually they'll produce a design that can fly!
Posted by Jongudmund at 13:01 No comments:

This is a bit naughty, but fair play it's a catchy song

When I was a Weetabix

Back in the early 80s, Weetabix breakfast cereal was marketed using a collection of anthropomorphic wheat biscuits called the Weetabix Club. Like many multi-character gangs in the comics of the time, these were basically sterotypes. There was Brains (the brainy one), Brian (the normal one), Dunk (the thick one), Crunch (the hard one who wore bovver boots), and Bixie (the girl).

The Club were the stars of short comic strips – found on the back of packets and also printed in regular comics as adverts for the breakfast cereal. Comic strip adverts were quite common at the time. I remember half-page mini-series promoting The Goonies and the early-80s Biggles movie, among others. They’d run for a few weeks alongside the ‘real’ comic strips.

You could, as a buyer and devourer of Weetabix save up tokens and join the Weetabix Club yourself. (The devouring of Weetabixes by hungry children was something that was never discussed in the comic strips, funnily enough.) As a member of the Club you received freebies and could send off for other Weetabix-branded goodies. For ages I had writing paper with the gang members on, and I also had a bright yellow Frisbee I’d sent off for.

I’ve mentioned before how I grew up in a Christian family, and although we weren’t allowed to have Ice Magic dessert sauce due to its occult potential, our family wasn’t quite as strict as some. One day a slightly stricter family came round to our house for tea and I was sent out to play with my brother and their two boys.
﻿﻿﻿﻿﻿
﻿﻿﻿ ﻿﻿﻿ ﻿ We soon hit a problem. The trend at the time was to ‘play’ the TV shows that were popular. There were four of us, which was perfect because we could play A-Team. Unfortunately, the other two had never seen the A-Team, didn’t know the catchphrases, and didn’t want to play (understandably). It turned out that they watched very little television – The A-Team was considered too violent, as was Knight Rider, Danger Mouse, Thundercats, well, pretty much everything.

They didn’t like reading either, so we couldn’t play any comic characters. They weren’t allowed to play soldiers. As you may have guessed, their parents never took them to the cinema. The only possible play-characters we knew and they knew were the Weetabix Gang.

So, finally, with a set of characters we all knew, we started playing. I was Brains, naturally, as I was the one with glasses (I told you it was about stereotypes – brainy people wear thick specs!), the others were Brian, Dunk and Crunch. The game was we were looking for Bixie, who had been kidnapped. We roved the large field next to our house looking for ‘clues’ and avoiding possible threats for most of an afternoon.

I’ve told this story to a few people, but none have yet credited me and my pals with any ingenuity in finding something we could all play. Most people just laugh, long and hard, and then tell me I must have been a total lame-o. Maybe I was, and maybe my claim to fame is that along with those other three boys we are the only children to pretend to be wholewheat breakfast cereal for an afternoon.

Posted by Jongudmund at 18:37 No comments:

I have had a few conversations with people lately that have run something like this: “I know it’s only a cartoon / trashy action movie / Doctor Who, but it annoyed me how unrealistic it was...”

I realise that may make me sound nuts, but my point is this: I can accept implausible plots (e.g. a time travelling alien that looks just like a human traversing the multiverse in a little blue box), but any story, no matter how far-fetched has to abide by its own internal logic. And however fantastic and unbelievable the story, holes in the plot come down to one thing: shoddy writing.

For example, my main objection to Happy Feet was that the main penguin (whose name I forget and can’t be bothered to look up on IMDB) didn’t grow up and all his contemporaries did. So at the end of the film he was still a little grey chick, but the girl penguin he liked was in her proper plumage and everything. There was no reference to why this should be the case, or any explanation at all for it.

I think sometimes people think ‘oh, it’s only a cartoon, it doesn’t matter’, but whatever film it is, I feel cheated if people don’t do their job properly with a script etc. That, for me, was an irksome plot-hole that made me quite annoyed at the film-makers and sucked all the joy out of the film.

Also – as an aside – I really didn’t like the zoo scene where he was quite clearly suffering post traumatic stress disorder due to being confined. I’m not sure how I feel about zoos generally (some seem quite good; some are awful), and it kind of glossed over the distress that can be caused to animals in the name of entertaining humans.

I suppose there is something good any film showing how exhibiting animals can be bad for them, but whether a cartoon where it all came good in the end was really the place for effective social commentary is debatable.

There are other examples of films / TV shows where stuff just doesn’t add up, like the ‘pirates’ episode of Doctor Who last year where one character just disappeared with no explanation, or any film that relies on people changing their mind and crossing a huge distance in an unfeasibly short time to turn up in the right place at just the point where they can save the hero(es) when all hope seems lost.

Script-writers can get away with it sometimes – recently in The Muppets they made a joke out of that corny plot device (‘How did you get back here so quickly?’ ‘We travelled by map!’), which worked within the internal logic of the film.

I wish all script-writers were as good at closing plot-holes.
Posted by Jongudmund at 18:21 No comments:

That's Mister Potato to you

I liked this quirky collection of random, obscure internet terms, which they could have been making up.

I was particularly struck by the term POTATO - Person Over Thirty Acting Twenty One (or Twenty-one Online). A cruel smack in the face to those of us who've grown old but haven't grown up.

Still, if you're over 30 and you regularly use 'lolz' you deserve to be called much worse than a potato.

On the subject of potatoes, I'd seen this postcard before Elaine blogged it but have no way of proving that now - the secret of true happiness!
Posted by Jongudmund at 21:16 1 comment:

Email ThisBlogThis!Share to TwitterShare to FacebookShare to Pinterest
Labels: acronyms, Elaine, internet, potatoes, slang, words that ought to be used more

At home with the mice 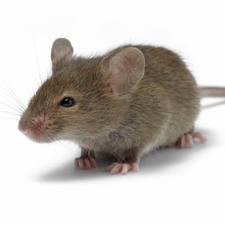 For the last week we have been trying to deter some unwelcome guests of the rodent variety.

Fair play to Cardiff Council, their pest control service came out the day after we called them and were very helpful in a) helping us realise this wasn't an insurmountable problem, b) reassuring us that this was a very common problem for lots of people at the moment, and c) advising us on what to do.

So we now have a house full of tasty poison, which we think is working, The mouse poos, that they handily leave behind as evidence of where they've been, are getting smaller. Which presumably means the mice are getting smaller, which means we've killed off the big ones and now the small ones are venturing out.

As an animal lover I do feel a bit conflicted poisoning mice, but less so after we discovered one had pooed on our toaster (and possibly in our toaster). We have now binned said appliance and are waiting for the mice to be eradicated before replacing it.

We have also been using a lot of anti-bac cleaning wipes and having a big tidy / clean under and behind the furniture. It's quite hard work, but necessary. If only, because otherwise you sit there wondering what is behind / under the sofa you're sitting on.

And that's not a nice feeling at all.
Posted by Jongudmund at 21:55 No comments: 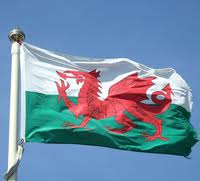 
St. David's last words, at the end of a long and fruitfullife of missionary endeavour among the pagan Welsh, were apparently 'Be joyful, and keep your faith and your creed. Do the little things that you have seen me do and heard about. I will walk the path that our fathers have trod before us.'
'Do the little things in life' ('Gwnewch y pethau bychain mewn bywyd')  is probably a very good maxim for living. Little things can mean a huge amount. It always amazes me what people remember - little things you say or do that meant a lot.
Posted by Jongudmund at 23:35 No comments: