A review of Godless Morality by Richard Holloway 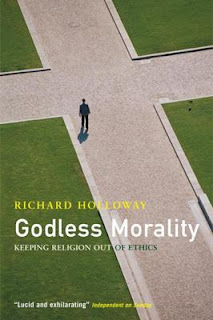 Over a decade ago I was reviewing books for the trade journal of UK Christian bookshops. I was sent a book by Richard Holloway, who had just left the ordained priesthood in the Anglican Church. He had stepped down from the role of Bishop, which is obviously fairly high up in that denomination, and was now embracing life after theism. The book I was reviewing had a write up of Richard that mentioned he was the author of Godless Morality - a title that intrigued me. So when I found a second hand copy recently I bought it to see what he had to say.

It's a short read and I found myself agreeing with a lot of what he wrote. His basic premise is that because theologians and religious leaders can't agree definitively on what constitutes moral or immoral behaviour, this throws the legitimacy of basing morality on religion into question.

He points out that coercing moral behaviour by insisting people behave a certain way is often far less effective than if people consent to certain moral standards. That's a very important point when so many religious people seem to want to make laws for everyone else to follow. You could possibly change the way people behave but you will not make them want to behave that way by forcing them to.

Instead, Richard suggests that authority has to earn respect through the "intrinsic value of what it says", not because it can impose moral parameters on people and make them behave a particular way. The moral philosophy in the book isn't complicated. Richard makes a good case that morality based on preventing harm is pretty much universal and can therefore act as a base for a moral system that does not depend on religious revelations of what is right and wrong.

But harm must be evidenced - and the evidence for harm to the individual and to society is lacking for a number of things that are proscribed by religion. Ultimately, in Richard's view, many religious statements on morality come down to preference because they cannot explain why doing or not doing a particular action will cause harm. He is particularly critical of people ascribing their own preferences to 'God'; with people even sometimes admitting the course of action they claim is divinely mandated, and therefore 'moral', is unfair or defective, and yet because it is labelled as 'God's will' they will not countenance change.

Richard sums this up by saying identifying "transient social attitudes" with 'God's will' has in the past given religions great power, but is now what is frequently rendering religion irrelevant. Enshrining the mores of the past as eternal means that when society changes, religion struggles to keep up. It becomes a living museum of dimly-remembered attitudes that are seen as no longer useable in the world most people navigate daily.

That's all pretty sharp and is still very effective anti-fundamentalist thinking. Unfortunately, in the 17 years since this book was published, there has been a great amount of change in many of the ethical areas Richard looks at in later chapters. The commentary on human fertility has dated badly, while the legislation of gay marriage was not even on the agenda back in 1999 when the book was written.

But over all I felt there were still several important things in the book, particularly that idea of basing morality in a common universal ethic instead of competing truth claims within and between religions, and the idea that moral behaviour people consent to is more binding than behaviour that is coerced.

The book concludes with a 'look ahead' that depicts humanity standing on the cusp of a future that it shapes for itself, through gene technology and other triumphs over the natural barriers that prevent humans from achieving more. It is an interesting vision of the future from a churchman. It isn't the classic eschatalogical hope of Christianity, but it is hope nonetheless. Knowing Richard's trajectory, and how in a few short years he would formally reject the faith he was still ostensibly part of when he wrote Godless Morality makes this final section very interesting. It was also personally quite challenging to find myself agreeing with so much of what he wrote, given the path he was on in his faith.

Posted by Jongudmund at 21:40 No comments: