This year I am going to try and review films througout the year rather than having a stupidly long list at the end of the year like I did in 2016. So, to start this off here's the list of films I saw for the first time in January and February 2017. The key is as follows: C = cinema, D = DVD, N = Netflix

The Secret of Kells (D) - made by the team who made Song of the Sea (which was my film of the year in 2015). Brendan, an apprentice manuscript artist working in the scriptorium in Kells monastery looks after a manuscript gospel begun by St Aiden on Iona, as Kells comes under attack from Vikings. He is helped in his mission to protect the book by a faerie called Aisling who lives in the forest outside the monastery. The animation is excellent, although not reaching the heights of Song of the Sea, and the story is well told. Passengers (C) - big budget sci-fi starring Chris Pratt and Jennifer Lawrence, who are both 'passengers' who have paid a huge amount of money to travel to another planet. A few decades into their 190 year journey they wake up. It's hard not to write about this without spoiling it, but it raises interesting questions about being faced with your own inevitable mortality despite having the rest of your natural life to live and what would you do if circumstances trapped you in total isolation from the rest of humanity. The film had a few flaws, but both lead actors were very good and I enjoyed it.

A Monster Calls (C) - Cathy and I had both read the book by Patrick Ness that this is based on, so we knew what to expect. The story focuses on Conor, whose mother is dying from cancer. One night the yew tree in the neighbouring churchyard comes alive as a monster and offers Conor three tales, told in animated sequences, before demanding Conor tell him "the truth". It's not an easy subject to cover in a film but it tries to address the difficult mixed feelings people have in those horrible situations. We both thought it was very well done, but Cathy felt they had missed one of the key aspects of the book. I was a bit thrown to realise halfway through that I recognised Conor's dying mum, Lizzie, as Jyn Erso in Star Wars: Rogue One. Other actors involved include Sigourney Weaver, who gives an understated masterclass in acting as Conor's grandmother. 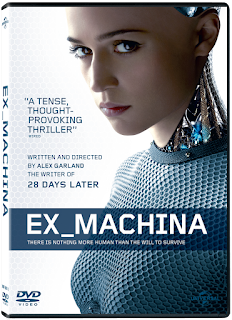 Ex Machina (D) - science fiction thoughtful thriller from British screenwriter and director Alex Garland. Domhnall Gleeson plays a programmer called Caleb who works for a search engine company and wins a staff lottery to spend a week with Nathan, the reclusive billionaire company founder, at his isolated luxury home. Nathan wants Caleb to run a Turing test on a possibly sentient artificial intelligence he has created. The AI looks feminine, is called Ava and is played brilliantly by Alice Vikander. Caleb starts to believe Ava is genuinely conscious and therefore alive and then has to decide if he will help free her from the secure area where Nathan has contained her. But Ava might have 'her' own plans. This is a thought-provoking film looking at some of the issues involved in creating articifial intelligence and I thought it was well worth a watch.

What's Your Number? (N) - rom-com with Anna Faris as a 30-something woman with a disastrous love life who gets hung up on the number of men she has slept with. Not wanting to bump the number higher she decides to revisit all her ex's in the hope that one of them has developed into marriageable material. She enlists her lothario neighbour, played by Chris Evans (AKA Captain America) to help her track them down and in the process rather predictably they end up liking each other. I did laugh quite a few times, particularly at the scenes involving Faris' real-life husband Chris Pratt who pops up here as one of her ex's. Chris Evans is also funny and very watchable. There's a bit of nudity and frank sex talk, but nothing over the top. Andy Samberg has a very brief cameo, which also made me laugh a lot.

The Cobbler (N) - Adam Sandler plays a New York cobbler who's inherited the family firm, including a load of old junk in the basement. Hidden down there is an ancient shoe repair machine with magical properties that means when he puts on the shoes he has repaired he takes on the likeness of the owners of the shoes. This sounds on paper like an awful premise, but it strangely worked, helped by a strong supporting turn from Steve Buscemi and a bit of a twist. Well worth watching for something a bit different.

Good Will Hunting (N) - I know, I know, it's 20 years old and people can't really believe I'd never seen it, but hey, I'm finally caught up. Surely everyone knows the story and the story behind the story - that Matt Damon and Ben Affleck wrote a script and ended up winning an Oscar. Everyone talks about Robin Williams in this, and he is great, but I feel for Stellan Skarsgard who never gets mentioned but is absolutely pivotal. It's weird watching this now, and remembering how fresh-faced Affleck and Damon once were, before fame and Bourne and Batman. They tend to sleepwalk through movies now so it was kind of nice to see them act. Also I think I appreciated the film more, having been to Bawstun and hearing the accents in real life and riding the train through the city. 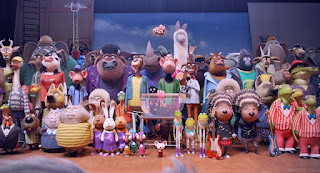 Sing (C) - Animated film about a city full of animals where a koala puts on an X-Factor style competition to try and save his crumbling theatre. The 'we need to save the theatre' trope was a cliche when the Muppets re-used it for their comeback movie several years ago. So that wasn't promising. The characters are a mixed bag. None get explored in real depth. There's a happy-ish ending and one or two clever jokes, but nothing exceptional.

The Lego Batman Movie (C) - I've already written a (spoilery) blog about how this didn't really work. It will appeal to a lot of kids who like Batman and who like people being silly and will therefore like Batman being silly. They have a lot of fun with the Batman mythos, but as a film it isn't great. There are cameos from villains from other franchises as well.

Birdman (N) - There was some hype about this when it came out and it won an Oscar for Best Picture. Michael Keaton is great as an actor who was famous 20 years previously for portraying a masked vigilante superhero before such films were such big business, and is now trying to resurrect his career in a Broadway play. I do wonder exactly how much of his real life feelings of regret for walking out on Batman back in the mid-90s informed this movie. It's hard not to think Birdman is a bit close to the bone. The film is a bit slow. Some of the other characters are a bit annoying. I didn't really like the ending. But overall I thought it was worth a watch and the cinematography as characters are followed through the twisting backstage corridors of the theatre is fantastic. 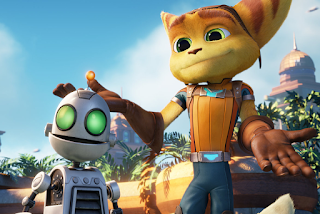 Ratchett & Clank (N) - I'm not sure this actually got a cinema release. Certainly it didn't really register. Catching up on Netflix, it's a by the numbers kids science fiction animation based on the vintage PlayStation game(s). Ratchett is a mechanic who wants to join the Galaxy Rangers. Clank is his robot buddy (and is rather adorable). Together they thwart evil, including a villainous robot voiced by none other than Sylvester Stallone. It's enjoyable knockabout stuff which made me laugh along the way, but isn't really a must-see.

Posted by Jongudmund at 17:19 No comments: