Warning: Mild Spoilers below the picture of Vision 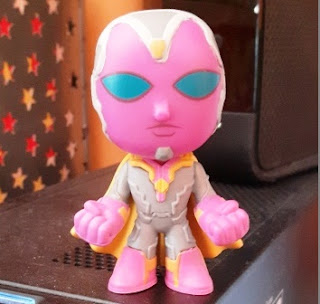 We have been watching WandaVision, the new Marvel series extending the Marvel Cinematic Universe (MCU) that is exclusive to Disney Plus. The series is trying to unravel a mystery concerning Wanda Maximoff who was introduced to the MCU in the film Avengers: Age of Ultron and the sentient humanoid machine Vision, who was also introduced in Age of Ultron and was killed by Thanos in Avengers: Infinity War.

Wanda and Vision had developed a relationship in those movies. In this TV series, Wanda and Vision are back together, recreating family life in various sitcom scenarios set in classic templates from sitcoms in various decades. The mystery is how this could have happened as Vision was dead, and Wanda had been absent for five years after the events of Avengers: Infinity War.

It's a very well-made series and I've been able to follow it despite not really knowing anything about the characters from their long-established histories in comics. However, I have been catching up on the MCU since starting to watch WandaVision. I had a week off work in February and watched Age of Ultron and the 3 Thor movies. Since then I have also watched Captain America:Civil War, Black Panther and Avengers:Infinity War.

Watching those films together really helps with the wider picture. I didn't remember how much Wanda and Vision featured in Captain America:Civil War, or how that film also operated as a prequel for Black Panther. Seeing the Wanda and Vision story arc across Age of Ultron - Civil War - Infinity War has really added to my enjoyment of the show.

But the reason I'm writing about it is because of a line in the most recent episode, which was released on Friday - Episode 8.

In Episode 8 there is a flashback scene where Vision talks to Wanda about the loss of her brother. He is trying to understand the emotions she is feeling.

Wanda explains that is feels like wave after wave comes crashing over her and she doesn't know if she can keep standing while they hit. Vision says that she will and then explained why with one of the most lovely descriptions of grief I've ever heard. He says

"But what is grief, if not love, persevering?"

That was one of those pieces of dialogue that really struck home with me. The Marvel writers have form for this. Eric Killmonger's defiant dying words in Black Panther is another such moment, and I have blogged before about the underlying theological implications of the depiction of deicide in Guardians of the Galaxy Vol. 2.

This line took me unawares because in the last few weeks I have really been missing my Dad. I have been sorting out my stamp collection ahead of a presentation I am doing in a few weeks time and as I went through a small box of material that needs sorting I found a little trove of stuff that Dad gave me, complete with a data-packed note of where he had acquired the items

There are no hard and fast rules about what triggers a little wave of grief and a renewed sense of loss. But it is comforting to think that those feelings are rooted in love more than anything else. Dad wrote those notes to accompany the things he gave me because he loved me. And I feel the way I do when I read them because I still love him. That is one of the hallmarks of love - that it perseveres. It is "stronger than death" as Song of Songs puts it.

And my grief is love, persevering.