Shrewsbury Town played away at Bristol Rovers today. It feels like they always play this game in February. I was at this fixture the past four seasons, but this year the travel restrictions due to the pandemic broke my attendance run.

Back in 2017, I went to this with my friends Steve and Sara. We met my Dad and my brother, Dave, at the ground. We all sat in the rickety temporary stand at one end of the ground protected from the elements by tarpaulin. 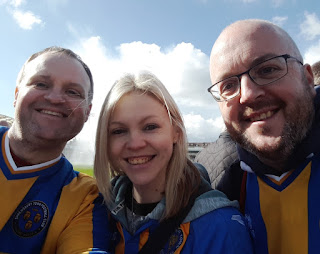 This was the game when beforehand a Bristol Rovers fan hilariously described Dad as being "stuck on transmit" - a story I told to open my tribute to dad at his funeral. (And it's still one of the best descriptions of him.)

In 2018 I drove over to the game on my own, and met Dad who had come down on the supporter's coach. I think that was the last league away game I went to with him. It was the season when Paul Hurst took Shrewsbury to the League One play-off final. Shrewsbury won at the Memorial ground for the first time in almost 50 years.

In 2019 the match was on Valentine's Day. My friend Stewart was my football sweetheart in Bristol. Stewart is the guy who succinctly summed up the Memorial Ground as looking like it had been built out of leftover bits of other sports stadia. 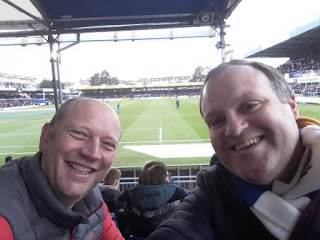 After the match in Bristol I drove straight to Barry for the evening kick off game there. I was very excited about achieving my first "twofer" - two games on the same day. But then the Jenner Park floodlights blew up, so it ended up being a "not-quite-twofer". I blogged about the frustration!

And then last year the game was on Leap Day. It was the fifth Saturday game in my quest to see five Saturday games in February. I saw two more games that season before the pandemic hit and stopped me from attending any football matches since. I drove over with John, another Shrewsbury fan who lives in Cardiff.

Thinking about all these games I realised that although I miss watching football, what I really miss is going with people. I have shared a Memorial Stadium outing with several friends and family members over the past few years and those memories are all good ones, even if the results haven't been. In fact, the football is secondary to the memory-making.

Watching football gives opportunities to connect. It was something I shared with my dad. It's something I still share with my brother. Friends who don't normally support Shrewsbury have sat in the perilously creaky away stand in Bristol while the wind bit through us, for no other reason than that I would do it for them if they invited me to watch their team (and I have braved a few away ends with them).

The photos I picked to illustrate this blog post show my point. I have some photos of the game and the ground. But I prefer the photos of us. They capture what really matters about being at those games.