Snack of the Month - Love Corn 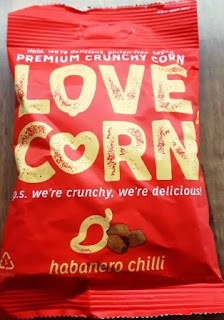 Love Corn is literally roasted sweetcorn. This was the habanero chili flavour. This pack was in my Christmas Stocking so the flavour was Santa's choice.

This is what it looks like prior to snacking. The corn isn't too hard and had a satisfying crunch as I ate it. However, the flavouring was a bit overpowering. The chili had a spicy kick to it that could have been toned down. Instead the overriding sensation was capsicum heat.

SO, although it was enjoyable, it wasn't as good as the January Snack of the Month, Ding Dong. (I actually bought another bag of Ding Dong to eat during the Superbowl, it was so nice!)