Twitter told me it was my Twitterversary today. They suggested I tweet about it and gave me a hashtag and a graphic to go with it, so it felt rude not to. 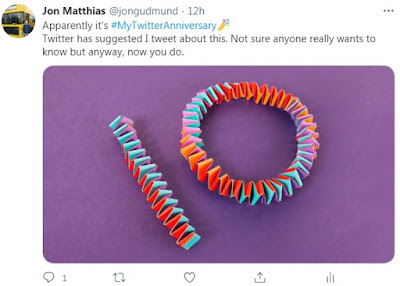 I first got on to Twitter for work purposes. The comms genius Marshall McLuhan once wrote that the medium is the message, and the programme I worked on was all about new things and innovation and networking, so it was important for us to be seen to be on Twitter. It was the perfect marriage of comms tool and comms.

At the time most of the people we worked with couldn't access Twitter on work computers. IT cited security issues - that old reason for not allowing anything to happen. We were going through a corporate web redesign and we asked the service providers who made websites for everyone if we could have a rotating Twitter feed in a box on the home page, then people would be able to see it even on the secure locked down computers.

That proved popular. We found out later that the developers were offering it to other people as an innovation for their updated websites.

A few months later I went on to Twitter as myself. I was quite active in tweet chats for a while connecting with other comms professionals. But after a while things change and move on and it got a bit boring. I still enjoy live-tweeting at events and seeing how different people contribute and comment along but I don't do that very often. I run a Twitter account in my current job as well, which I must admit goes through fits and spurts. Content creation is always a challenge.

However, in ten years on Twitter as me, I've still managed to tweet almost 14,000 tweets. That's a lot of content. I doubt it's all been of value, but it acts as an archive of sorts, always there for me to trawl through sometime.