We are one month through 2021 already. January has been a lockdown month, but a few things have happened. I also blogged a lot so this will be a mix of links back over the month's posts and a few other things that I hadn't mentioned.

One of the big things I haven't blogged previously was my Mum celebrating her three-quarter century. Unfortunately we couldn't have a big party because of lockdown. However, we adopted her an orangutan in Chester Zoo and we sent her a cuddly King Louie to remind her of her adopted orangutan. At some point when restrictions ease, we plan to meet up as a family and go and see the orangutan in person. 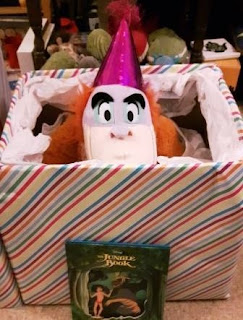 While there are disadvantages to getting older, at least turning 75 meant my Mum bumped up a level in the vaccination tiers, and I'm really glad she managed to get her jab this weekend. It hopefully means she will be safer from the effects of this virus that doesn't seem to be going away any time soon.
What else went on in January? Well, I published my annual Christmas card audit for the ninth year in a row, marked my sixth "diaversary" with a post about my diabetes recovery journey, started reading one of the Judge Dredd case files books I got for Christmas, watched a lot of football on TV, and generally concentrated on making it through Lockdown III. Cathy and I also sorted our stocks of loose Lego into a coherent storage system. It took some time!
One of the many benefits of living in Sunny-Grangetown-on-Sea is the mild climate. I felt a bit envious of my friends living elsewhere who got some proper snow to go out and play in though. Overall the weather has been quite grey and miserable, as if it's in favour of people staying indoors and out of harm's way.
Talking of being in harm's way, I've had a frozen shoulder for six months now. I was actually able to get a proper face-to-face physio appointment at the beginning of January. I had the shoulder worked on by the physio and two students, which was quite helpful because the physio explained things to the students so I learned a lot about how shoulders work (or in my case, don't work!) and why it couldn't be nerve damage. He was a bit disappointed that their actions had no discernible effect on my movement, but I felt it was a useful appointment.
A few week's back I posted about my 2020 Jaffa Cake comparison project. The 2021 project is up and running and I was very excited when Cathy came back from the shops with these!

I will be blogging about them in due course!
Meanwhile, over on my blog about Tony Gwynn baseball cards I ran out of baseball cards to blog about. I then managed to get hold of some more! I'm now up to 578 cards in total. I have spent a lot of time looking at baseball cards on eBay.
On one of my late night eBay trawls I found a cigarette card depicting my Great Uncle Tom who played football for Wales. I am planning a blog post about him soon, but in the meantime, here is a century-old collectible featuring a member of my family. 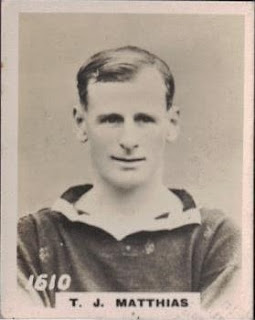