A selection of Christmas cards that we received for Christmas 2020. It's harder to make this selection than to do the actual audit!

One of the categories that we usually get a few entries in is "Christmas Food". Unusually this year we didn't get any cards of Christmas puddings or mince pies. We did, however get a picture of these adorable cupcakes. 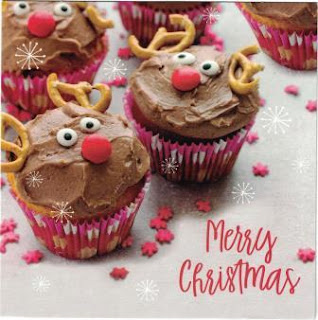 (Pretty sure that says Merry Christmas, although the font makes it look like Messy Christmas at first glance.)
Staying on the theme of food, there's always a very good chance of your card making it into the selection for my blog if it includes a pun, as this one does. This card made me hungry every time I looked at it. 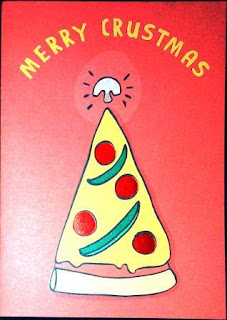 Speaking of puns, this year was the first time I got a card with a Welsh pun on it. Unfortunately I didn't say the greeting out loud until I had already asked what the joke was. Then I got the joke before the reply text arrived. 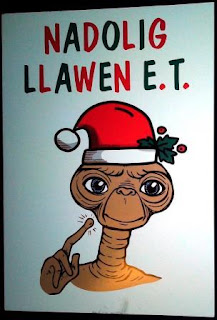 Some of these scans are a bit wonky and odd (like the one of E.T. there) because I set up my overhead scanner to scan one card and then tried to scan them all using it. This next card was the reason I set up the overhead scanner. If I'm a sucker for puns, I'm a ma-hoosive sucker for googly eyes. 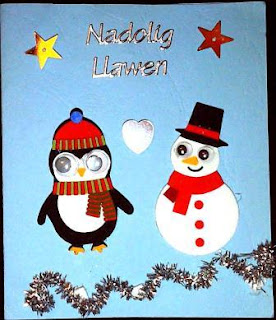 That's tinsel on the bottom as well. I didn't know how it would work squashing it into a flatbed scanner.
That card is the reason the ACCA2020 records 4.5 penguin cards and 0.5 Snowpeople cards. I couldn't assign it to just the one category.
Penguins are popular on Christmas cards, even though they aren't North Pole animals. They're cute though. That one at the bottom right looks like he is shouting "Hooray!" Probably because he's been able to swivel his wings in an utterly unnatural direction for a penguin.
I always try to include at least one religious-themed card in the selection. Truthfully, they tend to be quite dull. However the following card was a bit different and the only card received this year to mention Jesus on the front. 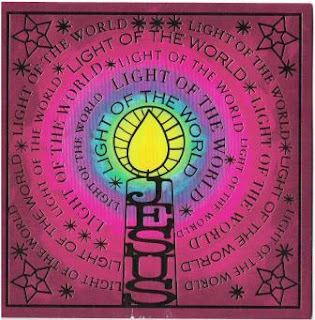 The lettering is foil and shiny, but hasn't scanned very well. I couldn't get this to scan properly under the overhead scanner so resorted to the flatbed.
"Sport" was a new category this year, occasioned by a card from a fellow baseball card collector. This card has featured on my baseball card blog as well - it was my Christmas Day post. 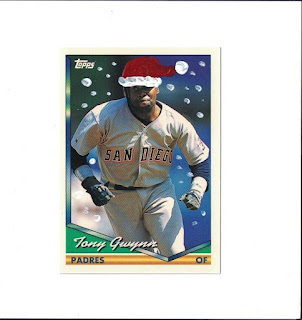 For those who don't know, I collect baseball cards featuring Tony Gwynn (over 570 so far!), but this is the only one in my collection that's been doctored to show him in a Santa hat!
Talking of Santa hats, there was another returning category this year - dogs! We had two cards with pictures of dogs wearing Santa hats, but my favourite one had several hatless dogs on. 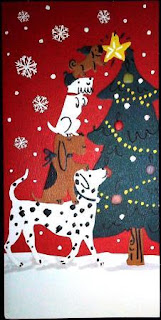 I must admit, it surprises even me that I chose to show off hatless dogs rather than behatted dogs, but that card's just too cute.
Another new category this year was 'References to the Pandemic'. We had one card in the category, and I really liked it. Everyone, meet Rudolph the Red Masked Reindeer. 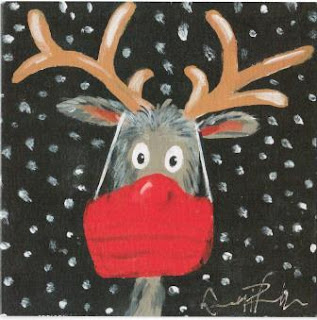 And if that's got you humming a tune, this final card might well have the same effect. This was actually the card that Cathy gave me and as usual, she brought some strong game. A cute design, a cracking pun, and raccoons. Gotta love raccoons! 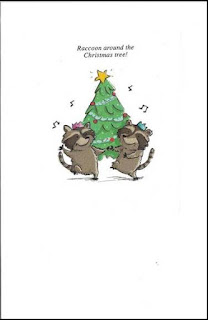 There's only the first line there, so I've added to it.
"Raccoon around the Christmas Tree
In the Christmas Party bins
Eating the trash so merrily
With our furry bandit grins."
Seriously, someone needs to make that into an actual song.
So those are 10 cards that I really liked from the ones we were sent this year. Many thanks to everyone who sent us a card. Look out for some forthcoming extra posts about Christmas cards coming soon.