I watched 41 films for the first time in 2020, but only seven of them were actually new releases. I saw three in cinemas before they closed under lockdown rules in March, and I saw another five new releases on Netflix and Disney Plus. So this isn't going to be a long post at all.

Even though we only went to the cinema three times, Cathy and I did get to meet a film star. 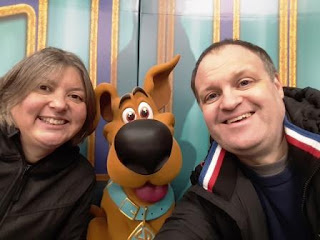 The eight films were (in order):

1917 was a very well-made first world war film where the central conceit was that it was filmed as if it was a continuous shot. Although there were a few 'fade to black' moments. I thought it started really well, with the panning shots down trenches, but a bit like the central protagonists who got sent to deliver a message, it got lost a little bit along the way. It captured that sense of danger, especially in the quiet bits not knowing when or if a shot or bomb would come out of nowhere. I would say it was worth watching, but I wouldn't want to watch it again.

JoJo Rabbit was a second world war film that tried to be three films in one - a film about the Nazification of children by the Hitler Youth, a film about Germans resisting the Nazi regime, and a film about Jews in hiding from the Gestapo. The second theme was the one least served by the script. There were some very clever touches throughout the film, which focused mainly on the little boy, JoJo, and his imaginary friend, Adolf Hitler.

I was uncomfortable seeing the Hitler Youth sections played for laughs, but that's probably just as well. It was very black humour, particularly the lines delivered by the ever-excellent Sam Rockwell. As it became apparent that the regime was willing to use children dressed in paper uniforms as cannon fodder to slow down the advancing Allied armies, the real dark heart of Nazism was exposed, and if it had been played entirely straight, then it would have been unrelentingly grim.

Changing the tone slightly, the film I saw most recently in a cinema was A Beautiful Day in the Neighbourhood. This starred Tom Hanks, as the real-life Mister Rogers whose show 'Mister Rogers' Neighbourhood' was a hugely popular children's TV show for decades in America. I have never watched that show so can't really compare Hanks' portrayal to the real person. During the film, Rogers is interviewed by a hatchet-job reporter who sets out to find the real Fred Rogers behind the TV persona, only to find that Fred is the genuinely nice guy he portrays on TV.

It's a schmaltzy film. Probably the schmaltziest film I've seen in a long time, with a family reconciliation theme in the life of the hardbitten reporter that was saccharine. There was a bit of the 'uncanny valley' about Hanks' portrayal as well. So overall it wasn't a film I'd bother watching again.

Onward was Pixar's film most affected by the pandemic, with it's release date bumped and then pulled completely in favour of release on Disney Plus. It's set in a fairy-tale style world that has modernised and magic has died out, although there are still creatures like unicorns (which knock over garbage bins to root through the trash) and fairies (who are a biker gang). The main story is about a young troll who discovers his late father was a magician and has created a spell that could bring his dad back from the dead for a short period of time. The spell goes wrong and only half his dad appears, so he and his brother go on a quest to finish the spell.

It had its moments, and lots of funny gags. The scene at the Manticore's Tavern was probably my favourite. But I felt it was trying too hard to make an emotional impact and unfortunately it couldn't land its punches.

Enola Holmes was released on Netflix. It stars Millie Bobby Brown, who played Seven in Stranger Things, as Enola, the younger sister of Sherlock Holmes. She has the same sleuthing mind and puts it to use when her mother disappears. There is a sub-plot involving the suffragette movement but the main story involved Enola getting mixed up with a young aristocrat who is on the run because his life is in danger.

I liked the film. Millie Bobby Brown carried it well, with lots of breaking the fourth wall. There was a scene filmed at the Keighley & Worth Valley Railway, and having been there and seen the sheds full of train carriages that are used in various period dramas, I found it quite amusing to try and see how many different coaches they used. This was based on the first book in a young adult fiction series, and I would be very keen to watch sequels.

Mulan was a live-action remake of the classic Disney cartoon, released on Disney Plus in lieu of a cinema release. I have two main issues with the film. Firstly, if you are going to remove the best character from a film, in this case Mushu the dragon, for the sake of 'realism' why replace that character with another supernatural character who was a bit crap? Secondly, if you are going to recreate an iconic scene, like Mulan triggering an avalanche with a fire rocket, why change the mechanism of that scene, and make it crap?

Disney keep remaking their classic cartoons as live action movies, and I've been disappointed with them. (Cinderella is perhaps the exceptions because the original cartoon is a really boring film anyway.) If Disney are going to keep doing remakes, they could at least be making Muppet versions of these films, which would be a lot more entertaining.

On Christmas Day I watched Soul, which was released on Disney Plus. Ostensibly it's a film about death and making sure you actually live your life before you die. The  main protagonist, voiced by Jamie Foxx, is a music teacher with dreams of playing in a real band, who gets his shot only to die in an accident. As a disembodied soul he tries to make his way back to Earth, only to wind up in a therapy cat that has been brought in to comfort his comatose body in the hospital.

There are other stories around that, with some telling points about people losing sight of their lives by focusing too much on one thing, or being afraid to actually live at all. The animation is absolutely gorgeous at times. There are several jokes with the usual selection of clever gags that will probably go over the heads of kids who watch it. And overall there is that bold theme of actually experiencing life while it is being lived and finding joy in that. Pixar often take these deep themes and present them in a new way, and they are probably the film studio making the most philosophically challenging mainstream movies at the moment.

The final film I watched this year was The Midnight Sky, which starred and was directed by George Clooney, and released on Netflix. George was the sole survivor of a catastrophe on Earth, and spent the film trying to warn a returning spaceship crew that the planet was a radioactive mess. It was two hours long, but felt longer, was pretty bleak throughout and didn't have much of a resolution. The few action sequences had predictable conclusions. By now, if there's a spacewalk and everyone is really happy at how successful its been, there is bound to be a disaster. And there was.

So, of those eight films, I think three were worth recommending. They would be JoJo Rabbit, Enola Holmes and Soul. Whereas Mulan and The Midnight Sky are ones to avoid.