I've been running this audit since 2012 and it is easily the most popular feature on this blog. Which is a bit weird, but, hey, I'm all for giving people what they want.

I'm going to proffer my thanks to Cathy for her assistance in the audit this year before we get into the audit proper, rather than tacking it on like an afterthought. Thanks Cathy!

Here's a picture of our Christmas cards in the "Audit Basket" before the audit began. 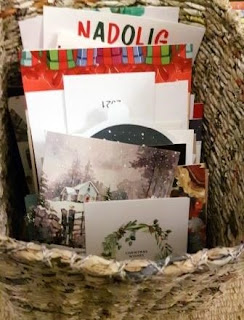 And so on to the audit! As ever new categories are marked with an asterisk. There are also some returning categories including the much-missed Dogs in Santa Hats! I've marked returning categories as RC.
Total number of cards: 81 (down from 84 in 2019)
Hand-made / home-produced cards: 7
Cards designed by kids: 6
Cards with glitter: 8 (a reduction from 13 in 2019 - perhaps reflecting new 'glitter is evil' messaging)
RC ~ M&S Cards: 4
Cards sold in aid of charity (or fundraising): 48
Total number of charities represented: a massive 60, but this was boosted by one card that was raising funds that would be split between 32 charities
Most popular charity represented: British Heart Foundation with 11 cards, making it 3 years in a row for BHF
Charity card cause breakdown (this is approximate because some cards covered more than one type of cause)
Cards raising money for cancer charities: 19
Cards raising money for other health issues: 37
Animal charities: 2
Children's charities: 15
Overseas development charities: 12
THEMES
Religious-themed cards: 20 - this was down from 24 in 2019 and means that less than a quarter of the cards we received had a religious design
Cards featuring the Nativity: 15
Three kings: 2
The shepherds: 0 (I think this is the first time we have recorded zero)
These themes all recorded zero entries as well: The star of Bethlehem. Angels. Choirboys, 'Cartoony' religious
Other themes
Santa: 8 (big increase, up from just 3 in 2019)
Penguins: 4.5 (one card was a penguin and a snowman in equal prominence)
Bears: 2
Deer/reindeer: 6
Christmas trees: 8
Christmas food: 2
Robins: 2
Sheep: 2
RC ~ Dogs: 3 (of which 2 had Santa hats!)
Other animals with or without Santa hats: 1
Winter scene/scenery: 5
Snowpeople: 0.5 (see the penguin category for explanation)
Licensed characters: 2 (although I suspect 1 was used without a license)
Holly and wreaths: 7 (up from zero in 2019, so a big trend change there)
*Sport: 1
*Christmas present(s):1
*Cars laden for Christmas: 2
*Reference to the Pandemic: 1
Themes that didn't register any cards this year: Christmas Elf, Christmas decorations, Donkeys, Snow / snowflakes, Llamas, Hares and Moons, Mistletoe, Owls
Messages on front of card
Cards that mention 'Christmas' on the front: 32 (of which only 2 were religious)
"Seasons Greetings": 1
Mentions "Jesus": 1
RC ~ "Peace": 2
Bible verse: 1
Lines or titles of Christmas carols: 10
Lines or titles of Christmas songs: 3
So what conclusions am I drawing from this year? Santa was more popular than he's been for a while. In terms of the Christmas story people chose to send us Kings rather than Shepherds. There's always been a disparity in favour of the Kings but it was a real surprise to get no Shepherds at all. It would appear the 'Hares looking at the full moon' theme is over. But in it's place we got two very similar designs that will get their own blog post soon. Yet again, I'm surprised how few animal charities are represented among the fundraising cards, but it feels like the percentage of cards that are fundraising cards is going up - it was over half the cards this year.
I will be posting some of our favourite cards over the next few days. Thank you everyone who sent us one.
The long list of previous audits
2012201320142015 plus 10 favourite cards, senders analysis and Bible verse breakdown2016 plus favourite cards2017 plus a dozen favourites and Christmas carol audit2018 plus 15 favourites
2019 (original version) (updated version) and 12 favourites