Cathy says she told me that I'd posted the audit too soon, and she was right. The day after I posted the results of this year's audit, a Christmas card arrived.

This raises a conundrum. I got a hardline response from Chris (of "Merry Fartmas" fame) on Twitter, who said that Twelfth Night was the obvious cut off point. But then I reminded Chris that every year the big audit we submit to in work extends its deadlines and he replied with laughing emojicons so I'm pretty sure we can also re-evaluate the results to take into account new data.

But first you may be asking, who is this late card sender. Well, everyone, let me introduce you to Stewart. I met Stewart when I was doing my MSc. He's a good mate who introduced me to Nepalese curry in Bristol on a night out when I missed my train home, and together we have braved the away ends of Rodney Parade in Newport and the Memorial Ground in Bristol to support each other's respective football teams. He was with me at the first half of my frustrating attempt to attend two football matches in one day. (Yes, I'm still bitter about those blooming floodlights!)

And the thing is, Stewart has rescued one of our "none" categories this year, because he sent us this... 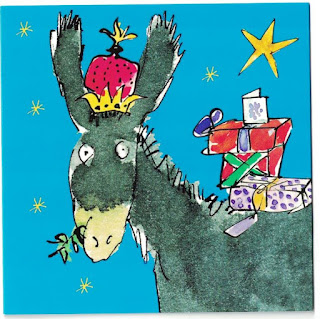 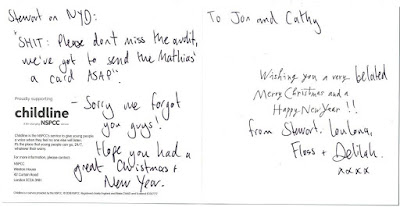 How could I not re-open the audit to include this when someone has written that?

So, there you go. Just when you thought the ACCA was over, it lives on!