Calendar year football reviews are a bit odd, as they traverse the tail end of one season and the start of the next. But thanks to the Futbology App (formerly known as the Groundhopper App) I had a handy run down and summary of all the games I went to in 2019. I made it to 40 games, which is a record number in a year for me, and included a short summer stint of fun in the Europa League following Barry Town all the way to Belfast. 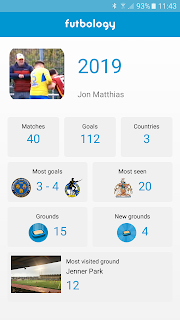 I'm not going to bore you with crap match action photos from 2019, because there are enough of those on my 2018-19 season review post, and my summaries of pre-season, and August, as well as my hilariously disastrous attempt to go to two games in two different countries in the same day!

Instead, here's a photo from the Art of the Wales Shirt exhibition that was hosted in The Museum of Welsh Life in Saint Fagans in November. It featured match-worn shirts from 1958 up to the present day. 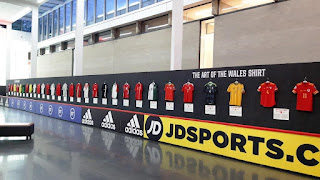 The thing about the Futbology App is that it awards 'badges' for certain achievements like seeing a certain number of games. I didn't know that until I got one in one of my first games of 2019, when I 'checked in' at Newport County v Leicester City. Embarrassingly, this figure is wrong because I still hadn't entered every game recorded on my spreadsheet onto the App, but I'm including it for the sake of completeness. 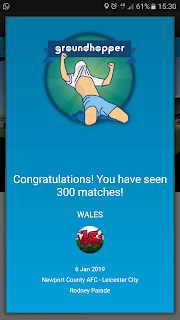 But my first real badge was also at Rodney Parade a few months later, when I saw Newport County for the 10th time. 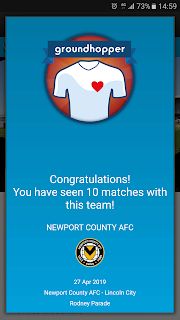 I then got a double when I went to Belfast - it was my 25th Barry game, and a new country! 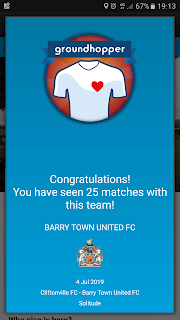 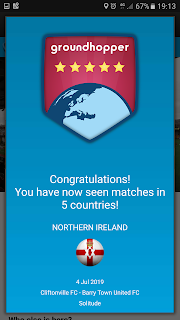 October was a bumper badge month. I picked up a badge for seeing QPR for the 10th time, as they lost to Cardiff. I also got a badge for watching Wales and for my 350th game - a genuine achievement this time. It was for Barry v Airbus, an otherwise less than noteworthy game except that in a season where Barry seemed to only score screamers from 30 yards, their second goal was the closest of tap-ins ever. 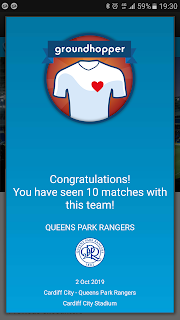 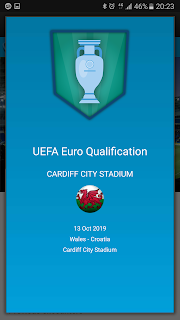 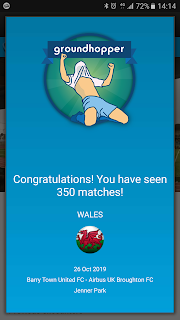 I wrapped up the year with a badge for my 25th game at Jenner Park. I had actually got the badge for 50 games at Montgomery Waters Meadow (eyeroll at the sponsor name) when I saw Shrewsbury play Portsmouth back in March, but I didn't screenshot it at the time. Even I didn't anticipate I would be so sad as to stick them all on my blog. 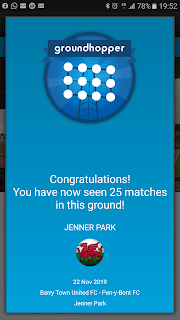 I really like the Futbology App. It's nerdy enough to really scratch my data itch and the badges give you something to collect as well! The badges have all been rebranded with the name change now, so I'm glad I screenshot them when I did.

Most of all, I want to thank my Dad for the game at Telford, which turned out to be our last footballing adventure as just us, and for all the games, the tickets he never asked me to pay him for, the driving to random places in far-flung parts of the country, the phone call deconstructions of games and tactics, the enthusiasm, the infectious passion, and the love. I've taken to wearing his cap to football matches. He goes with me through every turnstile, jumps up for every goal. I miss him every game.
Posted by Jongudmund at 22:30