A few days ago we got a large envelope through the post addressed to "The Occupant" at our address. When I opened it, inside was a book about Islam and two booklets, all produced by an Islamic charity that is trying to win hearts and minds for Islam. 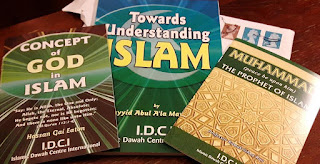 They are substantial publications and, as you would expect from something designed to persuade you to become a Muslim, they start from the preposition that Islam is the Truth and the best thing ever for all human beings. Any suggestion of repression or oppression in Islamic societies is all a big misunderstanding, you see.

The booklet about Muhammad has an interesting blurb on the back. 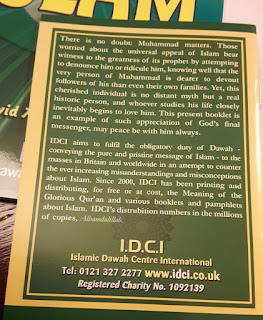 "There is no doubt that Muhammad matters." That's a unarguable starting point. It also struck me as being almost identical to what Christians would say on a booklet about Jesus. I'm not sure if that's intentional or not.

I don't know how the people who sent this to me got my address. Maybe they have been mailing the entire neighbourhood. Islamic unsolicited post is new to me, and this isn't the most random religious post I've received. In 2015 I got sent some photocopied pages of absolute batcrap loopiness that I'm still not a hundred per cent sure was serious. I blogged about it back then. Seriously, you have to read it.

Then in 2016, I got sent some Chick Tracts through the post. If you don't know what Chick Tracts are, they're ultra-fundamentalist evangelistic propaganda, mainly written by a guy called Jack Chick, that go beyond asking you accept Jesus into your life, and basically tell you that whatever you are interested in is inspired by demons. (Someone even turned a Chick Tract about demons running Dungeons & Dragons games into a horror movie called Dark Dungeons!) 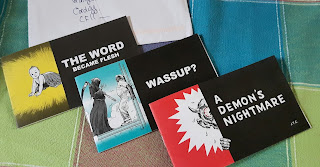 I got sent three by someone, who decided to stay anonymous. They did helpfully write some advice on the back for me, though, recommending some books and telling me to have house meetings to discuss things. When I posted the pictures on Facebook someone else in my Friends list knew someone who had been sent something similar, so I don't think it was an isolated thing aimed at me personally. 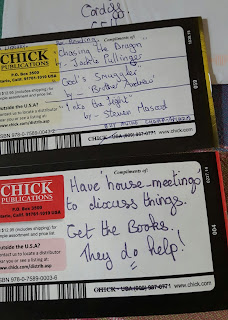 I have to admit I haven't held any house meetings to discuss things. Years ago I read God's Smuggler by Brother Andrew. I'm not sure how it would help, unless I was embarking on a career smuggling Bibles.

There's a few common themes to all these mailings:
1) I don't know who sent them to me
2) I don't know how those people got my address and why they thought I would want to receive this information
3) Whoever sent them to me seems to think that sending unsolicited reading material through the post is the best way to engage me in their religious ideas
4) There has been no follow up (not that I want any)

I am sure that whoever has sent me these things has done it with the best of intentions. They want their truth to illuminate my life. Ultimately they want to save my soul. They may even feel that they are obeying a direct order from God. But if it's so important, it's a shame it's so ineffective.