I discovered The Good Place during its first season, and I have loved it, even while it meandered a bit during it's difficult third season. Now that it has concluded I want to write a bit about it.

I will be talking about the twists and turns that the series took and so IF YOU HAVE NOT SEEN IT ALL, and you want to watch it, DON'T READ THIS POST.

Seriously, there is a really good twist at the end of season one and I don't want to ruin it for you, but there is also a twist in season 4 that I want to write about here, so if you aren't up to date, come back when you are.

Or prepare to have it spoiled. Your choice. 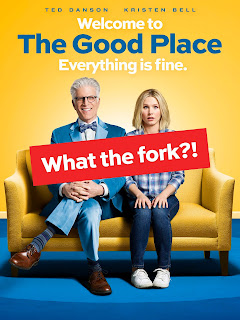 The basic premise of The Good Place is that Eleanor Shelstrop (played by Kristin Bell) wakes up in a waiting room and is welcomed by an avuncular older man, Michael (played by Ted Danson), who reassures her that she is in the Good Place. Yes, she's died, but that's OK. Everything is fine. He proceeds to take her on a tour of her new residential environment, the 'Neighbourhood', which has been designed to cater to all her innermost wishes.

There's a problem, though. Eleanor is a selfish, awful person who shouldn't be in the Good Place. Her very presence causes chaos in the fabric of the post-life community she now inhabits. She confides this to her "soul mate", Chidi, who is an ethics professor and asks him to help her become a good person and worthy of her place in the Good Place.

Chidi agrees to help her and from that point on most episodes unpack a particular ethical or philosophical issue in an intelligent and accessible way. This includes serious discussions about whether "being good" out of fear of punishment, or for a reward, is actually good, or, in fact, selfish. What is true altruism? Is moral behaviour moral if you don't want to do it, but feel forced to act a certain way? Those are massive ethical questions and this is the first time I've seen them actually addressed directly in a sit-com.

(I think those are particularly pertinent questions to adherents of religions that offer the faithful the opportunity to escape hell or gain entry to paradise after death. It's coercive morality that makes people comply with expected patterns of behaviour out of fear of either going to hell or missing out on heaven. When scandals erupt from those authoritarian religions, it shouldn't really be a surprise. People in those religious environments don't consent to a certain moral code; they have it imposed on them and that's why they so often try to get away with breaking the rules that are imposed on them.)

The first series ends on a twist. None of the four main human characters had actually earned a place in the Good Place - which came as a surprise to two of them. In fact, the existential, philosophical torments of trying to help someone fake being good was an elaborate ruse. The Neighbourhood is actually part of the Bad Place, and Michael is a demon who has devised this place as a venue for eternal torture.

Unfortunately for Michael, the fake Good Place, was having a reformatory effect on Eleanor and the other characters, which is how they eventually realise they are in the Bad Place. Eleanor had changed so much she had acted in an unexpected way, admitting she didn't belong there, and causing Michael to frantically improvise. Now revealed as a demon, Michael had to resort to a finger-snapping reset of the entire Neighbourhood to end the series.

The beginning of the second series sees the main characters burn through Neighbourhood after Neighbourhood. Each time they see through the ruse. Each time Eleanor and Chidi fall in love. Each time they somehow end up becoming better people. Michael goes frantic with worry that he is about to be exposed as a fraud to his fellow demons and proposes a truce with the humans. His side of the bargain is to learn about ethics. There's a great episode about the Trolley Problem and choice-making when every option is awful. Then at the end of the series, the humans are returned to earth to see if their lives would turn out differently with different inputs into them.

That poses another interesting moral question. Can we really judge people for their actions if their actions are determined for them by their environment, their upbringing, the beliefs inculcated into them? That's a whole other branch of ethics that doesn't diminish the importance of moral decision-making, but begs the question whether it's even possible.

Into season 3, which took a while to get going. In this season the big reveal was that the entire system was broken and it was impossible for anyone to enter The Good Place because the interconnectedness of human beings meant that everyone was culpable for bad things happening. In a way, this was updated original sin, with sin inevitable because we all benefit in some way from things that disadvantage other people. The karmic mud sticks to us. Again, that was an interesting concept. Not quite as accessible as the earlier stuff, but deep nonetheless.

And so to the final season, which has just finished. In this series, the four pivotal humans are tasked with trying to improve four other people to prove that humans can become better. As a result they build an afterlife system that enable people to grow into mature, moral, responsible humans worthy of living in the Good Place. A kind of purgatory system, if you will. The main characters are transported to the real Good Place, where there is a final twist.

The actual Good Place is an eternal bliss-filled existence where you do whatever makes you happy all the time. Except, in a twist, that sort of existence turns your brain to mush. It's actually horrible and the people who are there have grown to hate it.

Eternity is one of those concepts that sounds good in the pages of a holy book, but when you actually think about it, is awful. Unending existence doing the same thing, or even unending new experiences, is not really comprehensible. It would rob existence of meaning.

The solution in the final episodes of the show are to provide a way out; a final door from the Good Place into nothingness. In a very touching final episode, each of the main characters, even Michael, reaches a point where they are ready to leave the Good Place, and cease to exist. They are reconciled to not existing any more and they are ready to go. When he announces that he has had enough, Chidi cites a Buddhist teaching about a wave crashing on the beach, which really resonated with me.

In Chidi's summary, if we see a wave on the ocean, we can measure its height and the refraction of sunlight from it, and then the wave crashes on the beach, and it ceases to exist. But the water is still there. The wave had gone, but the water has returned to its original form. It's how it was before.

I really like that as a metaphor for death. It reminds of a book I read about the universe's origin in ripples of quantum energy, and if we wanted to get all science-mystical about it, we could talk about those ripples having temporary consciousness before returning to the underlying energy grid of the universe.

The final episode was sad, but not tragic. The goodbyes were sincere not maudlin. And the concepts were as important as ever. There are very few programmes, especially comedies, that treat its audience as smart enough to think about mortality and what it means to be human, and live our lives connected to other humans in such a way that we make the world a better place.

The Good Place was a good show. It made me think a good deal. And that is what I enjoyed about it most.