Baseball cards aren't a particularly random thing to collect (unlike souvenir monks). They are one of the most well-known things that people collect. Maybe not in the UK, though.

I first fell in love with baseball cards when I was 10 years old and we went on a family holiday to America. This was in 1987. The cards looked like this: 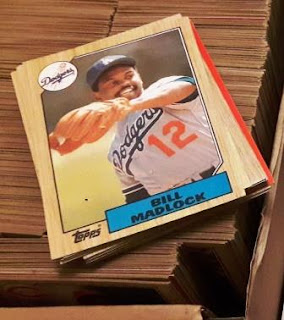 We had collected football stickers back home, and baseball cards were a bit like them, except that you got loads more in a pack for hardly any money at all, plus a stick of gum, and they were cards not flimsy stickers. The backs of the cards were covered in weird statistics and facts using incomprehensible terms. Of course I loved them. They were everything about America, that culture that was both foreignly weird and discomfortingly familiar. This was sports, but not as I knew it.

Baseball cards got me into baseball. I've since seen four major league baseball games while exploring North America, and been to the Baseball Hall of Fame and Museum in Cooperstown. I've watched the Boston Red Sox on Star Wars Night, and heard Art Garfunkel sing the American national anthem before a New York Mets game. But my first game was in San Diego, watching the Padres play the San Francisco Giants. Barry Bonds was the San Francisco star player and he had just been busted for using steroids, so the reaction to him from the Padres fans was savage.

Anyway, I have been a Padres fan since that first game, even though they aren't a successful team. As I've been collecting baseball cards I've tended to collect cards of Padres players, and one player in paticular, "Mr Padre", Tony Gwynn.

I still like random cards. I am about 40 cards away from completing the set of Topps cards from 1987 (there are hundreds in the set). I frequently ask friends who visit the USA to buy me a pack or two of baseball cards. But in terms of a collecting focus, Mr Padre is now it. 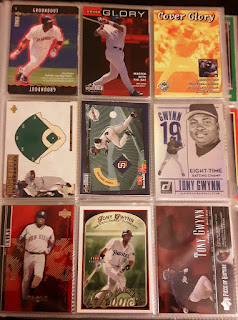 Tony Gwynn is a sporting hero of mine. He played for the Padres for 20 seasons. Baseball is all about the statistics and Tony's are stellar.  He won eight batting titles in his career, tied for the second-most in Major League Baseball history. He accumulated 3,141 career hits, one of just ten players to make 3,000 hits while only playing for one team. He had a .338 career batting average and never hit below .309 in any full season. Now what that means is that for about one in every three times Tony went up to bat he would get a hit and make it safely on base.  That ball comes at a batter at anything up to 95mph. Ordinary mortals can’t even see it.

In 1994, Tony was batting at .394 - almost a 40% success rate when the season was cut short because the baseball player's union called a general strike. The season ended in chaos. There was no World Series. In the summer of 94, Tony was in the form of his life, hitting .475 in 10 games in August just before the strike started. Tony was literally three hits short of .400 for the curtailed season. It's a classic 'what might have been' and remains the highest single season average since 1941.


Tony played in the World Series in both 1984 and 1998; the only two times the Padres have made it to the World Series. In the World Series games he batted .371 - that's almost 4 hits every 10 times he went to bat. He was a 15-time All-Star - when the best players in the American League and the National League play against each other. He won seven Silver Slugger Awards for batting and five Gold Glove Awards for fielding. He was inducted into the Baseball Hall of Fame in 2007, his first year of eligibility. 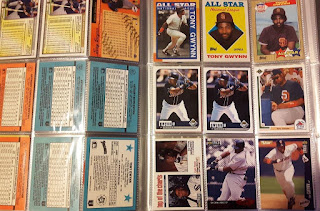 Tony Gwynn died at the age of 54, from cancer. Among the many tributes paid to Tony, many people  commented on his loyalty to the Padres, staying in San Diego even though there were several opportunities for him to leave and play elsewhere. In fact, his willingness to accept less money to stay in San Diego than move to another team got him in trouble with other baseball stars, because they said he was driving down the market value for top players.

He is "Mr Padre". When I saw his plaque in the Hall of Fame, I felt very emotional.


Baseball cards have been produced by a number of different manufacturers. In addition to the regular cards (known as 'base') some players will appear on special subsets within sets (know as 'inserts'). For example, players who make the All Star team, lead the league in particular statistics, or achieve notable milestones tend to feature on these extra cards. So, as you can imagine Tony Gwynn appeared on lots of baseball cards. There are actually over 10,000 listed on various baseball card indexes.

While most of the cards in my folder were printed while Tony was still playing, new cards are still being made. This retro style one was printed last year. 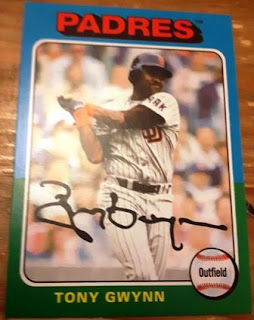 So there are still plenty of cards to collect, and probably new ones will be produced this year. Currently I have about 175 different ones. I'd like to collect 394 as that seems a suitable number. I think I need to set myself a target limit before the house fills up with oblongs of cardboard.