I've been wanting to read up on Mithraism for a while. So after I had made my lending rights discovery, I had a look to see if there were any books about it. There were several. I avoided any that talked about being a "bold new interpretation" or "exciting theories" in the blurbs because those are usually signs of crank authors, and went for what seemed a fairly solid introduction: The Roman Cult of Mithras by Manfred Clauss. 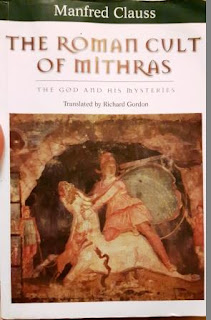 Mithraism is often described as a competitor with early Christianity. It was widespread across the Roman Empire, with links mainly to military installations. Mithras was worshipped in artificially constructed caves called 'speloa' (presumably where we get the English word 'spelunking' meaning exploring caves from), or now often described as mithraea (singular: mithraeum). They were usually very small temples, with low ceilings, a carved relief showing the god Mithras killing a bull, some statues and some ritual tableware. Mithraea have been found from Hadrian's Wall to Turkey, with lots along the Danube, the outer edge of the Roman Empire where lots of army units were stationed.

We don't know a lot about Mithraism because no writings survive, so the cult has to be recontructed from the carvings and other artefacts. That's what I liked about this book. It was basically a description of archaelogical finds and the reader was left to interpret them. The author mentioned some of the theories that have been put forward but noted that it is all open to interpretation. I quite liked that openness about the lack of firm knowledge.

Information can also be gained from surviving Christian writings that regarded Mithras worshippers as pagan enemies. We have to be a bit careful taking those accounts at face value. But combined with the archaeological evidence, a picture of the cult can be built up.


The cult of Mithras was very popular, but worshipping communities were small. There was a lot of variation in practice, and in the types of statue or scenes from Mthras's life depicted in the mithraea. It was a very personal religion, so people tended to carve or commission carvings that meant something specific to them, and place it in their local mithraeum.

Several of the mithraea that have been excavated seems to have been systematically destroyed at the end of the fifth century, with the carved wall reliefs smashed into tiny rubble. It's generally assumed that this was the work of Christian mobs - and there are comments in Christian writings about the destruction of "caves", most likely mithraea. Christianity was, of course, the official religion of the Empire by then, and the Church had become a highly organised centralised power. So it was easy for Christians to suppress the independent, isolated, small communities of Mithras worshippers.

It was really interesting learning more about this forgotten mystery cult. There are quite a few parallels with early Christian practice, and before Christianity became the unstoppable juggernaut of the Empire's official religion, the practices of Christians and Mithraists would have looked quite similar to outsiders. They would have both been bizarre little group meetings with their own peculiar ideas about god-men who were the light of the world. There is even a possible trinitarian version of Mithraism depicted on at least one carved relief.

It would be a stretch to posit a common origin for the similarities between the two religions, but it has made me wonder how much bled over from mystery religions like Mithraism into early Christian practice and teaching. It certainly seems possible.