Despite being interested in politics, I had never joined a political group before 2020. In May, I joined Yes Cymru - the campaign for Welsh independence.

There were a number of reasons behind my decision, but the main one is feeling that Wales should be in control of its own destiny as a nation. Nothing in the subsequent six months of the year has convinced me otherwise. Frankly the way the UK Government has handled the pandemic and the Brexit negotiations has been negligent and the country is in a parlous state as a result. 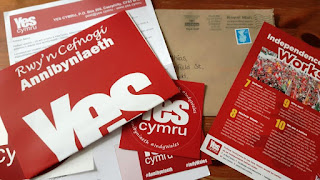 I don't think an Independent Welsh Government could have done a worse job than the Westminster Government, which looks like a case study in decision-making by procrastination until an eleventh hour choice is forced. The Welsh Government overall did pretty well in controlling the first wave of Covid, despite being gazumped on PPE for NHS staff by Westminster. Restrictions were tighter in Wales and fewer people died here than in England on a per head basis.

But time and again in the Autumn, the Welsh Government's efforts to protect the people of Wales were undermined by Westminster. The UK Government refused to extend the furlough scheme to support people who could not go to work during a mandatory 'Fire Break' in Wales, but then just two weeks later did extend the furlough scheme when England had to go into lockdown. This was after Jacob Rees-Mogg mocked Wales by saying the fire break was the sort of thing you got when you elect socialists. He thankfully shut up when England had to have a lockdown that was twice as long as the Welsh one.

There was a lot of anger about that and Yes Cymru membership surged as a result. When I joined my membership number was below 3,000. There are now over 15,000 members. That feels like a groundswell of support for independence that reflects a change in attitude.

We will see how the Brexit deal pans out in 2021. I predict it won't be great. It will apply even greater pressure to the Union. Scotland already has a nationalist government and are pushing for another referendum - which is only fair as EU membership was one of the key arguments of staying in the Union back in 2014. Now the UK has finally stumbled out of the EU. Scotland voted overwhelmingly to stay in, so one of the main arguments against independence has gone. If there's a second referendum, the result will probably swing to independence.

And if Scotland goes, then what for Wales? Already there are plans to reduce the number of Welsh seats in the House of Commons. Should we just sit here and become ever more marginalised, made ever more poor by the mismanagement of a government that doesn't seem to care what happens here? We have already had it made clear to us what we can't have - the electrification of the mainline railways were cancelled, as was the tidal barrage in Swansea Bay. Instead, we were told we would have a prison hulk floating off Port Talbot, and radioactive mud dumped along the South Wales coast.

I believe Wales can be more than a convenient place to dump toxic waste.

It's the fashion to leave unions of countries at the moment. Other countries that are smaller and poorer than Wales have thrown off the shackles of distant parliaments and forged their own new identities.

Wales could be the next.