Every so often a weird theme emerges in one of my annual Christmas card audits. A couple of years ago I commented on how 'Hares & Moons' seemed to be a thing. This year we had two cards that were incredibly similar in theme, but were produced by two totally different retailers in different illustration styles.

Imagine if you will a little red car, laden down with presents and Christmas supplies. Chances are what you're imagining looks a bit like this. 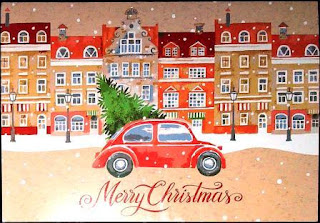 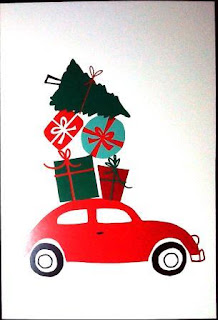 These cards were produced by Tesco and Tiger respectively, and the similarity is uncanny. Both feature red cars that look like stylised Volkswagen Beetles. Both are carrying a Christmas Tree. They are both driving left to right.

There are always going to be shared sources of inspiration for designers and illustrators. Equally, there are always going to be certain themes that appeal to commissioning editors and company buyers in any given year. I am reasonably certain these designs were dreamt up, committed to paper or screen, shown to decision-makers, and given the nod for production, completely independently. It just feel weird seeing them next to each other.

It was also ironic as well as 2020 was Pandemic Christmas and people weren't supposed to be driving anywhere. That couldn't have been predicted when the decisions were made to produce the cards, and it just goes to show how much things have been changed by the pandemic. Certainly travel bans would not have been one of the first things I thought of if I had received this card a year ago!