When all our cells change why do we expect to stay the same?

This post has been sitting in my draft folder since January 2017. Given some recent conversations I've had, I feel like it's worth an airing (with a few minor edits). 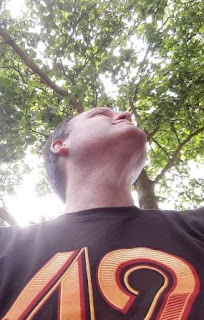 I find New Year quite melancholic. It's a time to reflect on what's happened and look back on stuff. (In 2017, for various reasons, I ended up looking back a bit further than normal. This is mainly because of reconnecting with some people I had been in school with over two decades previous.)

I journal offline as well and reading old journal entries, or my old blog posts on here, sometimes makes me feel like I'm reading about a different person. Douglas Coupland warns us that nostalgia is a weapon and sometimes I can turn that weapon on myself by thinking about the past and about how much has changed.

The thing about change is that it's rarely in huge increments. Yes, some are life-changing and can happen over a few short days (for example, diagnosis of a chronic illness), but most of our changes - in attitudes and priorities - happen slowly.

I read somewhere that all the cells in our bodies are renewed every ten years or so. I've been in a relationship over 25 years. I'm a whole new man. In fact, I'm the second whole new man to have been in the relationship. An entire version of me has died off and been replaced. And we didn't even know it.

Or did we? I'm not the same person as I was 25 years ago. Experiences and achievements, wins and losses, have made their mark. I feel a lot less certain about some of the things I was so certain about back then. Things that were once important don't matter and things that never used to matter to me suddenly seem important. How much of this is just the weight of living pressing down on me and how much is actually physical? Feelings of attachment and abandonment originate in brain cells that change like any other cell. As my cells change does that have an effect on my opinions?

There's a couplet in an Avett Brothers song that goes:

I really like that lyric because it shows how we can be perceived as the person we were in the past, even though we have changed. That can be a battle if we have grown up, if we react differently now, if we have different priorities. When people assume we will always act a certain way that can be constraining and they may not like it if we do something they don't expect.

There's also a danger in such expectations. If we know we are loved because of what we were when we were first loved then it's hard to say we have become something different. We become inauthentic versions of ourselves, afraid to admit what we really feel or think or believe at this point in time, in case it turns out the people who love us love us because of who we were then, not who we are now.

It's hard to see people for who they have become. If we have friends and loved ones who do see us for who we are and not who we were, then we are very fortunate.