The joy of existing captured in Free Guy 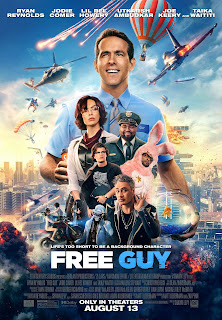 In Free Guy (newly released on Disney Plus), comedy genius heartthrob Ryan Reynolds plays Guy, resident of ‘Free City’, whose happy life is interrupted repeatedly by people punching him in the face, robbing the bank where he works, flying attack helicopters through the streets and so on. Guy just thinks this is normal and cheerily carries on with his life – saying hello to his goldfish when he wakes up every day, ordering his regular coffee with cream and two sugars, meeting his best friend who works as the security guard at the bank, and just shrugging off the mayhem around him.

Eventually Guy works out that he is actually a ‘NPC’ (non-playable character) in a video game. His life, which feels real to him, is entirely generated within the servers of a computer game company. This becomes more awkward when he falls in love with a player’s character who knows he is a NPC but also seems to be falling in love back with him. Guy has been programmed to love the character or has he? Falling in “love”, it transpires, breaks his programmed algorithms and sets him off on new courses of exploration and discovery.

That in itself is a lovely concept and one that could provide a useful metaphor for platform speakers the world over.

On the face of it Free Guy is a bit of a mash up of a few other film concepts. Cathy kept saying how much it reminded her of The Truman Show. The idea that computer game characters might have their own lives within the game was also explored in Wreck It Ralph. As someone with a lay interest in artificial intelligence, the concept of an AI algorithm reaching self-aware consciousness is fascinating to me.

But the bit that really moved me was about two thirds the way through the movie, when Guy is talking to his buddy, the security guard literally called Buddy, played incredibly well by Lil Rel Howery.  Through wearing game player spectacles, Guy has the capacity to see the world as gamers see it – picking up medpacks, ammo, and so on. Buddy doesn’t want to see the world as Guy sees it and refuses to put the spectacles on, but they remain friends.

When Guy is told that the world is about to end – because the villainous software developer who created ‘Free City’ wants to capitalise on its success by replacing it with ‘Free City 2’ – he asks Buddy why Buddy doesn’t want to know the truth about their world. Buddy’s reply perfectly encapsulated the power of living in the moment. He says something like ‘Maybe all this is just a game. But right now, I’m sitting here with my best friend who needs me. And is there anything more real than that?’

That really jolted me as a moment of truth in an otherwise fairly silly film. We have those moments when, yes, everything seems crazy and our worlds are rocked. But we still can connect. We can still hold those moments as real – the feelings we feel right then are actually the important things.

I really loved that brief scene. It elevated Free Guy from a decent way to pass the time to actually a movie with something to say.

We have the moment and in that moment, that can be enough. Because it is real.