Well that month seemed to pass really quickly. Maybe it was because I got to get out and about a bit with work, including a trip to Carmarthen despite the fuel panic at the end of the month.

From a footballing point of view, it was a much quieter month for me. Just four games, the biggest being a trip to Sheffield to see Shrewsbury play at Hillsborough against Sheffield Wednesday. 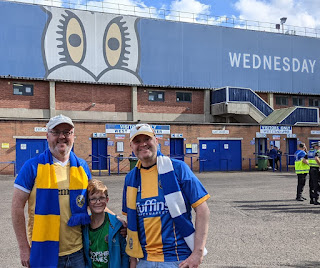 Shrewsbury managed to earn a very credible point, helped by Wednesday missing a penalty and a host of other chances.

It was a couple of days after my nephew Zac's 8th birthday and he came with me and my brother on the trip. His verdict on the day out was "We went to the pub for lunch and now Maccy's for tea. This is the best day of my life!"

"And the football," I said.

"Oh, yeah..." was the reply. Ah well. I understand. Having chips for two meals in a day is pretty special.

In other sports news, the San Diego Padres fell completely out of contention for any honours as their form went into a death spiral. Lots of things have gone wrong this year but their chief problem has been hubris. I have consoled myself with my baseball card collecting project - two big parcels of cards arrived this month and took my collection to over 1,000 cards featuring Tony Gwynn.

And of course there was a welcome return to playing Blood Bowl!

At the end of the month, Cathy and I had our 23rd wedding anniversary. It feels strange to think that we have now been married for more than half our lives (we were both 22 when we got married!), AND that we are only a couple of years off our Silver Wedding Anniversary. That just doesn't feel right. Silver Weddings are what old people have!

One of the presents Cathy got me will be the subject of its own blog post soon!