Last year Cathy and I adopted or sponsored or supported an animal every month through various organisations and agencies. We have decided to continue this year. Our January adoptee was a hedgehog through Cuan Wildlife Rescue in Shropshire. 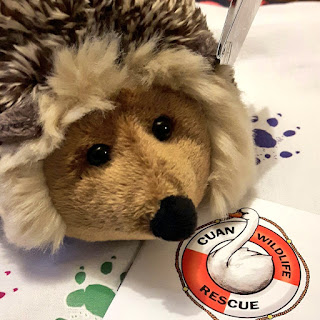 In return for a donation we received a toy hedgehog, and a few other bits and pieces including a hedgehog heroes tea towel, an adoption certificate and Cuan's latest newsletter. Cuan cares for literally hundreds of hedgehogs each year, along with numerous other animals ranging in size from tiny shrews up to deer. In total over 20,000 animals were cared for in 2021.

We have also had an update on the puffin we support through the Welsh Wildlife Trust. In addition to a lovely little annual report, the letter they sent confirmed that "our" puffin had been spotted on Skomer Island on a few occasions. 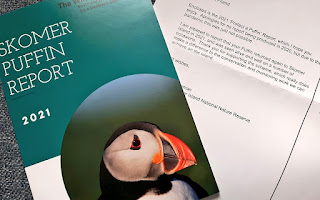 The report was full of interesting information - including a story about a puffin they spotted with a ring the researchers didn't recognise. It turned out it had been ringed under an old scheme when it was a chick in 1992! I've got adult friends who are younger than that! The survival rate for puffins is about 91 per cent, so almost 1 in 10 puffins don't make it through year on year. The one born in 1992 had beaten the survival odds three times over.
As an aside, years ago I worked in charity communications, so I always look at materials like this from a professional point of view. This update really worked in connecting me with the orgnisation. It was personal, because it mentioned "our" puffin, and it explained how our support was making a difference without a hard sell to continue that support. But the feedback and the nicely presented additional information has made me feel very positive about continuing to support the organisation. And I'll admit the photos of puffins help to sell it too.
When I rounded up all our adoptions from last year, I said the December adoption was on its way. I didn't know where it was coming from bacuase Cathy had arranged it as a surprise. It arrived today and what a surprise it was - an adopted manatee through the Save the Manatee Club. We are now the adoptive parents of Floyd, who is almost as old as we are. 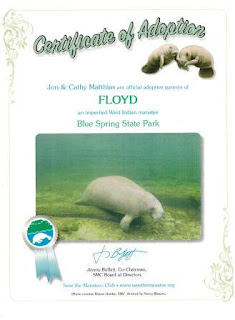 Floyd is apparently a bit of a character who will sneak up and barge photographers trying to take pictures of the manatees. He has some scars and has lost a chunk of his tail in a boating accident. Visiting the manatees at Blue Spring State Park in Florida is one of the things on my bucket list - hopefully Floyd will be there when we visit!
Posted by Jongudmund at 17:25