I sort of still collect stamps, although it's not something I'm doing as actively as in the past. Last year, the society I belong to, the British Thematic Association, started doing meetings on Zoom. I presented about my collection back in March 2021.

The Zoom meetings are recorded, so if you would like to hear me talking about my collection of stamps featuring the Statue of Liberty, you can watch it here:

I haven't added anything really to my collection for ages, except for a few things I inherited from my dad's collection as Cathy and I have been sorting through it. My collecting focus has switched to baseball cards, specifically cards featuring Tony Gwynn, the all-time greatest player for the San Diego Padres. I closed out 2021 on 1,052 different cards featuring Tony. One week into 2022 and I had a nice mail day when two envelopes arrived containing 3 new cards for the collection. 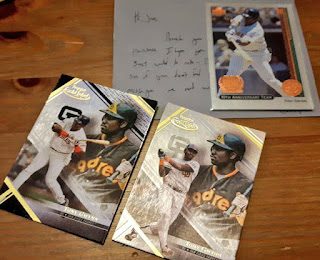 The card on the handwritten note came from Nashville and is from a set released in 1999. The others were from a collector in the UK and were released last year. My blog about baseball cards is currently on a midwinter break, but these cards will be featured on there some time this year!