Our 2021 menagerie of adopted animals

At the start of 2021, when the world was locked down, Cathy and I read about a number of zoos and other places that cared for animals that were finding finances difficult. We decided to sponsor an animal a month in different places, which means by the end of 2021 we had accumulated quite the virtual menagerie! (And some toy animals too!) 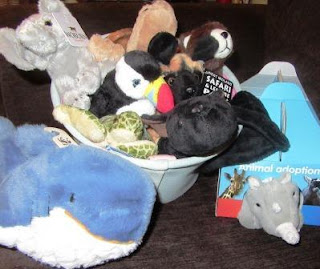 We have sponsored rhinos for a while through both Save the Rhino and WWF. The updates from both organisations are encouraging, and some rhino populations are doing quite well. However, these brilliant animals are still targeted by poachers who are after their horns for use in 'traditional medicine'. Rhino horns are made from the same substance as fingernails so it's not exactly a rare commodity. If anyone wonders why I have a very dim view of humans, the rhino poaching industry is exhibit A in my case against humanity.

Anyway, we started the year by sponsoring the care of a rescued bat at Cuan Wildlife Centre. This is a growing rescue and rehabilitation centre in Shropshire who do some wonderful work for wild animals. Their Facebook updates are an absolute joy. As part of the sponsorship package, we got a cuddly bat. 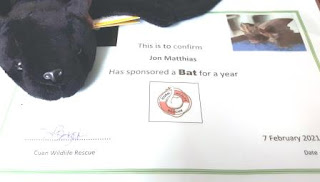 In February we sponsored a turtle at The Deep in Hull. This is a stunning aquarium that we visited in 2019 while on holiday in Yorkshire. We particularly liked the sawfish. However, we chose the 'turtles' sponsorship package which came with a toy turtle in a tin with various other goodies in it, including a nice fridge magnet. 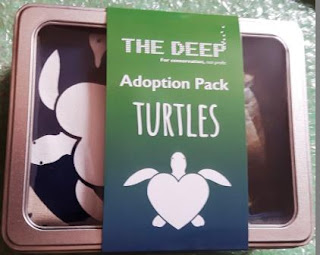 In March we decided to sponsor a seal at the Cornish Seal Sanctuary in Gweek. It's some time since we went there last. There's a choice of sponsoring a seal pup that will be released or sponsoring one of the permanent residents. Reading through all the biographies of seals you can sponsor presented us with a tough choice. We eventually picked a grey seal called Pumpkin, because he has a very rare illness and is on permanent medication so he can't be released into the wild. Cathy identified with the rare illness and medication side of things. 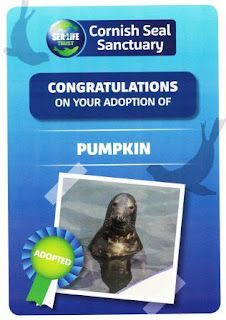 There wasn't a cuddly seal in the adoption package, but there was a fridge magnet of Pumpkin. It's on our fridge along with some of the other magnets we've acquired through sponsorships - Pumpkin's is bottom right. The rhino in the picture is Lankeu, our WWF adoptee. 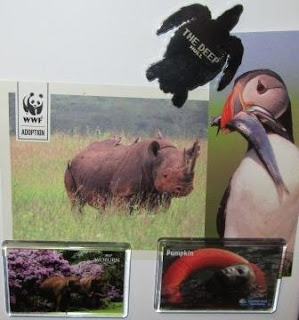 April's adoptee was a Painted Dog at West Midlands Safari Park. They call them Hunting Dogs but I prefer the name Painted Dogs. These wild dogs are very rare now, and like most wild dogs part of the problem is that humans either regard them as pests and kill them, or regard them as pets and feed them, thus disrupting their natural existence. 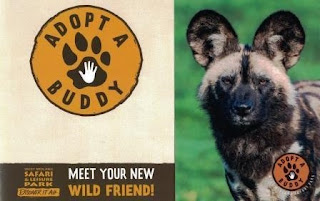 They also have the most amazing ears, as seen in the glossy photo that came in the adoption pack. The ears are captured in the little toy dog that we received as well. 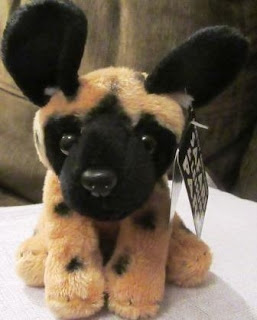 In May we adopted an elephant at Woburn Safari Park. We had a great day out at Woburn a couple of years ago and while we were there we got to go to an elephant's birthday party. Well, we watched from a distance as a troop of elephants demolished a "cake" made of branches and the birthday girl bounced a giant red ball around with glee. There was also a 'parade' where they brought a well-behaved elephant right next to people and we could reach out and touch it. An amazing experience and one I would recommend.

We took a bit of a different tack in June. We had been watching the puffin cam set up by The Wildlife Trust of South and West Wales, so we sponsored a puffin through them. The certificate was very detailed, including the leg ring identity of the puffin we support. 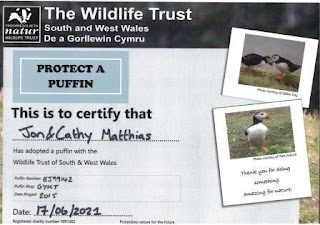 In July we sponsored Biggie the Aldabran Giant Tortoise at Bristol Zoo. Biggie has been a resident in Bristol Zoo since 1975, the year Cathy was born. He is the oldest animal currently in the zoo and has been there longer then any other animals. Biggie weighs 200k, which is the weight of a silverback gorilla. So that's why he's called "Biggie". The cuddly version of him looks a bit grumpy. 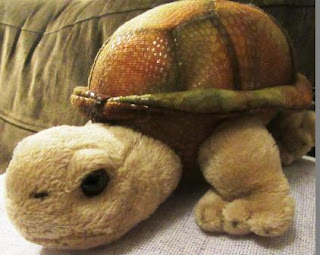 He seems happier in the photos in the adoption literature. Although, it's hard really to tell how a tortoise is feeling. They're inscrutable. 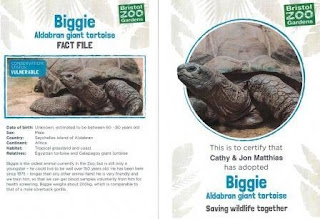 August's adoption was a bit different. For the first time we adopted animals at somewhere we have yet to visit. The Wild Place is linked to Bristol Zoo and we sponsored their sleuth of bears. (Did you know a collection of bears is a sleuth? I didn't.) The bears are Neo, Nilas, Albie and Gemini. I'm a big fan of bears. Definitely my spirit animals. 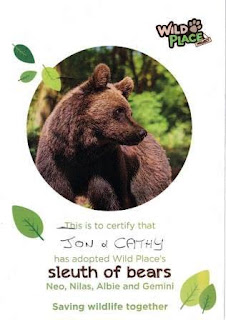 We hadn't adopted any amphibians yet and they are probably the biological phylum most in danger of disappearing entirely. We made up for our oversight in September by adopting a Fea's Tree Frog at Paignton Zoo. Aparently these particular frogs aren't overly endangered at the moment. Long may it stay that way.

Not content with already having two rhino adoptions on the go, we adopted the rhinos at Folly Farm in October. It was a trip to Folly Farm on a cold February day in 2018 where we learned about the work of Save the Rhino. I remember one of the rhinos present peering cautiously out of the rhino house door at swirling snowflakes and deciding outside was not for them that day. I don't blame them!

Technically, we sponsor all the rhinos, but the one pictured on the certificate is Manyara the matriarch of Folly Farm's crash of eastern black rhinos. 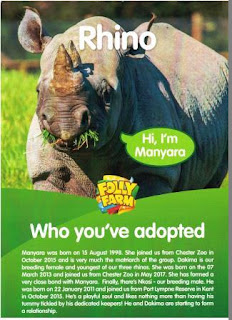 We went back to aquatic creatures in November, buying a Stevie Shark cuddly toy from WWF's Cub Club. The money from the sale goes to support shark conservation in UK waters. Stevie is filled with 100% recycled polyester filling and has got to be one of the cutest sharks ever. He is very soft and nice to cuddle! 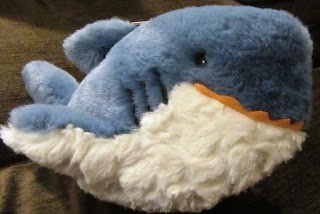 December's adopted animal is still on its way to us, delayed by Christmas post. (And probably by omicron as well - everything is getting blamed on that at the moment!) So, there will be an update post at some point in the next few weeks to round off the 2021 menagerie!