I had a full day yesterday. I started out with a lateral flow test to make sure I was safe to meet people, then I was off to the first Keep Grangetown Tidy litter-pick of the year. Over 40 people turned up and we collected a huge amount of litter.

I've blogged about litter-picking before and noted that it provides insights into the community we live in. On this pick there were lots of evidence of the pandemic. I picked up a couple of facemasks and a disposable glove. If I had found a discarded bottle of hand sanitzer I would have scored the pandemic litter trifecta.
One of the facemasks was designer. 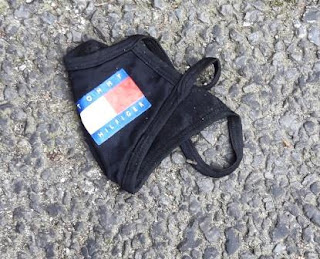 Behind a junction box on Clive Street I found a little collection of detritus that in it's own way tells a sad story. An empty whisky bottle and a scratched off lottery scratchcard. The can was a store-brand can of energy drink. It just all adds up to a tale of disappointed dreams. 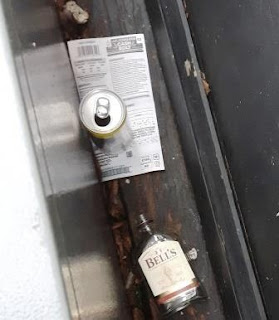 There's someone who won't be paying their parking fixed penalty notice as I found it thrown in the gutter on Clive Street. I also found a hubcap. It was too big for my rubbish bag so I took it back to the main collecting point. Later, I found it had been joined by a companion. They were different designs, but I noticed they were both Vauxhall hubcaps. 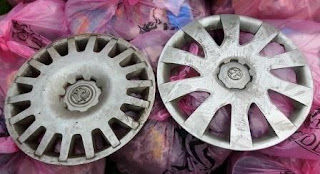 It felt like a very productive two hours. I walked some of the way home with some new friends chatting about Grangetown. After a quick lunch, I was back out again, and off to my first football match of 2022.

I was able to go to a game because the Welsh Government eased restrictions on Friday. I headed over to Gabalfa to watch Cardiff Draconians, who were third in the Ardal South West Division, play Pontardawe Town, who were second in the table.

I met my friend Steve at the ground and we had a good catch-up about everything that had happened since we last saw each other. Neither of us had been to the Draconians home ground, Lydstep Park, before, and it's got quite an aspect with the Gabalfa Towers looming over the little stand. 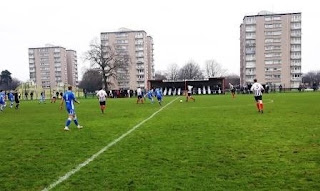 From another angle you can see the spire of Llandaff Cathedral. I only realised that at the end when it wasn't possible to get a good photo. So I will probably have to go back to another game some time to get that 'shot'.

The game itself was very tight. Pontardawe bossed the first half and led at the break. They looked in control in the second half, although with 20 minutes to go, the "Dracs" came more into the game. They had a goal disallowed, then scored. One of Pontardawe's centre backs then kicked a celebrating Drac player and got a straight red card. In the 89th minute, the Dracs were awarded a penalty, which they converted to somehow run out 2-1 winners.

I have seen three games in the Ardal South West this season, starting at Penrhiwceiber Rangers versus Caerau Ely. Last month I saw Caerau Ely against the Dracs. Then yesterday I saw the Dracs againt Pontardawe. Now I have an urge to go to Pontardawe next to keep the run of attending a home match of the team I saw playing away going.

And the day was not yet done, as my friend Connor was back in Cardiff for a weekend. We went out for a meal together in the evening. Connor gave me a late Christmas present of a Blood Bowl comic book. I'd not seen it before so it was a real surprise. Once I've read it I will consider reviewing it on the blog!